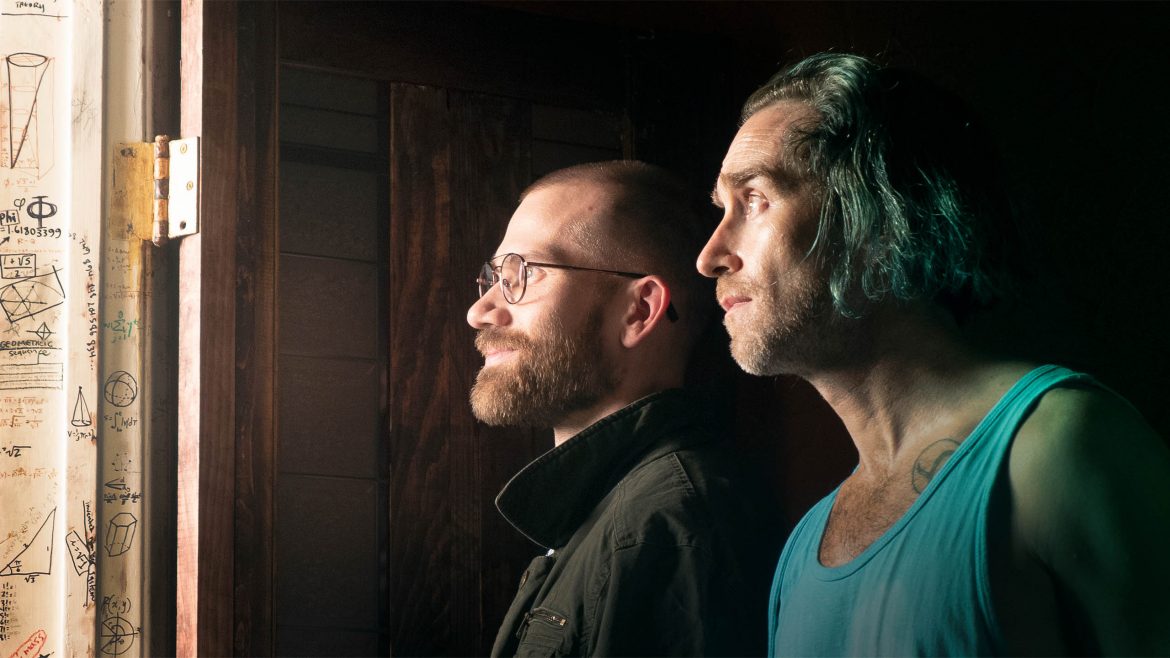 To some, mainly those interested in absolutely deranged, genre-bending storytelling, Justin Benson and Aaron Moorhead need no introduction by now. Coming off a very strong film streak with Spring, The Endless, and Synchronic, the duo have long proved to be a creative force to be reckoned with in the genre field, and their latest is no exception. Something in the Dirt is somehow everything fans could have expected from them while also being totally inexplicable in its own ways. It’s a special little gem that is certainly going to gather vast reactions out of everyone, but as the credits roll and time flies by, the more utterly fascinating it gets. Despite being quite literally their smallest feature to date, this is as fucking wild as anything else they’ve done.

Written and shot during the pandemic, Something in the Dirt follows a recent line of indie “do it yourself” features that try to make the best out of the now universal themes of isolation and distrust. Though, unlike previous attempts, Something in the Dirt is more of a product of the pandemic than it is directly inspired by it, meaning that its narrative and filming are obviously framed around the limitations of social distancing but the plot itself has little to do with the fact. Truth be told, one of the most impressive feats of the film is that you don’t really think about the obvious when watching it. It’s a pandemic production that utilizes its isolation to great effect, never feeling as small as it actually is – the testament of two dedicated dudes who just wanted to (safely) make something rad when the world was at pause.

When two unlikely neighbors (played by Benson and Moorhead themselves) get acquainted in their crummy LA apartment complex, they discover some sort of paranormal anomaly linked to one of their rooms. Is it related to the spiritual realm, or is it perhaps astrological? Can it possibly kill them? They don’t know but that’s not going to stop them from forming a get-rich-quick scheme by catching it all on camera. The two faux documentarians manage to record the phenomena with as good equipment as they can afford, also swindling in extra editors and other helping hands along the way, yet that’s not enough. They need to actually solve their mystery in order to finish the movie and get famous. The rabbit hole they dive into is more of a bottomless pit, as they soon begin to theorize over everything from interdimensional travel to brain-controlling parasites to ancient Pythagorean societies.

Benson and Moorhead akin Something in the Dirt more to The X-Files than anything else, and honestly, the film does play out as some sort of “lost episode” from that series – boasting a mystery that just keeps getting deeper and deeper, but maybe not as satisfying to air for general audiences, thus putting it on the backburner until fans can uncover it years later and show a new kind of appreciation for it. Something in the Dirt is very much more about the journey rather than the destination, a tricky line to tread when your movie continuously raises more questions than answers from beginning to end. What is revealed has much more to do with the main duo than the anomaly itself, which is exactly the point and makes for the most absorbing aspect of the film, to where it almost demands to be seen twice to get the full picture.

Something in the Dirt jumps back and forth between the “real” events our characters experienced, their amateur documentary with interviews and reenacted sketches of said events, archival footage, and flashbacks. The fact that the movie never really falls apart is an incredible achievement, especially for a project of this size. As the pair of unlikely neighbors start to show their true cards, you as the viewer start to question just how valid everything you’ve seen up until that point really is, whether or not it’s fact or from the characters’ self-made narrative. Certain parts will even make you second guess yourself. It’s a movie about how the misguided search for unequivocal truth can lead to lies and deception, ultimately morphing our own identities. The two leads don’t even trust themselves but will quickly run to Reddit or Quora for the answers, where literally anyone can edit the “truth.” This story may not be directly about the pandemic, yet it sure does reflect the modern zeitgeist.

Goes without saying that a film as perplexing as this demands your undivided attention, which would be a lot easier if it wasn’t for some mixed pacing at parts. At its best, Something in the Dirt will have your head running through every possibility. At its weakest, you’ll be wondering if all the going in circles will eventually lead to something worthy as the runtime almost reaches 2 hours. Though if you give the film your time and patience, Benson and Moorhead will leave you with uneasiness that simply can’t be shaked off; they find more eeriness through subtlety than most other genre filmmakers can only dream of achieving. Regardless if Something in the Dirt does slightly overstay its welcome, an unruly atmosphere of paranoia is always maintained, making its finale hit just as intended.

Justin Benson and Aaron Moorhead trace back to their roots to inject Something in the Dirt with a genuine DIY charm and appeal. As seen in the credits, they dedicate this project to “making movies with your friends.” With this much filmmaking prowess on display – written, directed, edited, shot, and starring Benson and Moorhead – this message will make you deeply appreciate Something in the Dirt even if it doesn’t all work for you after a first viewing. Those eager to go back for seconds will find much more to love, no doubt. It’s a small gift that keeps on giving, and the way Benson and Moorhead utilize every minor resource at their disposal (from their very own apartment during a pandemic) is purely inspiring. If you’re a fellow storyteller who’s been looking for inspiration in these murky times, look no further than Something in the Dirt.

Something in the Dirt premiered at the 2022 Sundance Film Festival