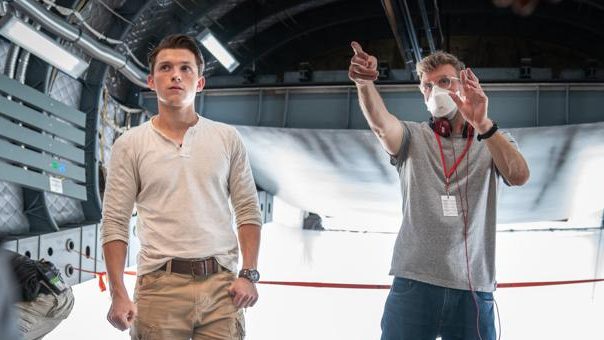 Filmmaker Ruben Fleischer has been making moves at Sony for years. Under their Columbia Pictures division, Fleischer first rose to prominence as one of the main voices behind 2009’s Zombieland. Now, over a decade later, he’s played a huge role in keeping that franchise alive while also launching one of Sony’s most profitable comic book titles with 2018’s Venom. It’s no wonder that the studio would then entrust him with paving the way for their next big venture: PlayStation Productions. The new branch already has film and TV adaptations of Ghost of Tsushima, The Last of Us, and Twisted Metal in the works. But any exciting endeavor needs to kick off with a bang, and Fleischer lights that spark with Uncharted.

Uncharted has been in development limbo for as long as anyone can remember, having been passed through the hands of various filmmakers, including David O. Russell (Silver Linings Playbook), Shawn Levy (Free Guy), Dan Trachtenberg (10 Cloverfield Lane), and Travis Knight (Bumblebee). Yet, the stars all seemingly aligned for Ruben Fleischer – not only was he the one to finally bring Naughty Dog’s critically acclaimed video game title to the big screen, but Sony is apparently so satisfied with Uncharted that Fleischer is already hard at work on adapting another Playstation hit, Jak and Daxter. When looking at Fleischer’s repertoire, it’s clear why he’s suitable for these tasks. From Columbus and Tallahassee to Eddie and Venom, his films find the best in unlikely duos, and any fan would tell you that’s exactly why games like Jak and Daxter and Uncharted work so well.

It’s this very idea that Ruben Fleischer emphasizes in our exclusive interview, specifically with the core dynamic between Tom Holland’s Nathan Drake and Mark Wahlberg’s Sully. He takes us through his love and admiration for the Uncharted series and, more importantly, the steps he took in making sure that his film stood above previous lacking video game adaptations. We also talk about his potential future, with more adventures in the Uncharted and Zombieland universes all being on the table. If you’re a fan of the games, there are some treats in store below.

To start us off, I’m really interested to know if you have any personal history with the Uncharted franchise?

Ruben Fleischer: Yes! My experience with the video game franchise was that I played Uncharted when it first came out. I was way more into video games then, because I did not have a career and did not have children. So as time passed, unfortunately, my PlayStation gradually got dusty and then outdated as other subsequent PlayStations came through the doors. But when I got this job, I went back and relived the magic of the first Uncharted and then played the rest of them just to have a better familiarity with where the franchise had gone. And also to just recapture the spirit of how awesome those games are, and see if I could fuse any of that into the actual movie that we were making.

Do you have a favorite game in particular?

Ruben Fleischer: I would say the first one [Uncharted: Drake’s Fortune] just because that was the one I was most familiar with and the one closest to my heart.

So with this film having been in development for a very long time, just how many other people have tried to make this happen and now it finally gets to be you, I’m curious if that adds an extra layer of pressure for you as a filmmaker, or do you just ignore that when you go in?

Ruben Fleischer: For me, I wasn’t too worried about the history of the project. I was just focused on what was before me, which was this great script, Mark and Tom were attached when I got involved, so this incredible cast, and just the great source material that was at the center of it all. I was just focused on trying to figure out how to make the movie the best adaptation that it could be of the video games.

Funny enough, you specifically have now adapted both video games and comic books, with Uncharted and Venom respectively. Do you approach them in the same way? Most people today would argue that adapting video games is much harder.

Ruben Fleischer: My approach to adapting existing material is that at the end of the day, we have to make a movie that works as a movie. It doesn’t matter how true or honest it is to the source material, if it’s not entertaining for movie audiences, then it doesn’t work. And I think that there’s, unfortunately, a fair amount of video games that preceded this one that people would say maybe weren’t able to stand on their own as films.

For me, with both Venom and Uncharted, I want to respect and honor the source material in what true fans of the game and comic book love about those characters in those stories. But like I said, at the end of the day, it has to work for our format, which is theatrical motion pictures. So I approached it as a fan of movies and want to pay tribute to it in the same way that I imagine you would adapt a novel. Although I haven’t had the opportunity to adapt a novel, everyone has their own experience reading a novel and imagining that world. I kind of do the same thing where you have these great characters and great storylines but, ultimately, I have to make it my own.

Seeing how Tom Holland and Mark Wahlberg were both already attached when you came on, and you’re trying to form your own spin on something that’s very recognizable, what kind of talks did you have with Tom specifically on that? He’s obviously a lot younger, but how do you still find the essence of who the character is?

Ruben Fleischer: Well, that’s the great thing about having such terrific source material. Like, there’s a reference point that we can all look at and are familiar with, and I think most specifically tone was at the center of those conversations. The tone of the games, the attitude, the humor. I feel like we really wanted to convey that relationship between Nate and Sully, that dynamic and banter that they have, and obviously put our own spin and do our own version of it, but at the center of the games is that relationship. And similar to the movie, you know, the movie only works because you love watching these two guys on screen together.

The games are filled with so many memorable set pieces, and you already took the cargo plane sequence from Drake’s Deception directly. Now, if it was totally up to you, what other action scenes from the games would you do in live-action?

Ruben Fleischer: I’m torn. I think that the car chase in Uncharted 4 is probably the greatest car chase of any medium, whether it’s film, video games, TV, or anything. I think that car chase is epic and unparalleled. So while I would love to try and recreate something, or try and do that, it’s just so perfectly done. It would be a little daunting, it’s also really long! I just think they beat every movie car chase with that game, and so that’s certainly inspiration if we’re lucky enough to get to make another movie.

Now that you’ve done so many films for them, it seems that you have a really good relationship with Sony. How did that play a role in making Uncharted and do you feel like they give you more creative freedom?

Ruben Fleischer: I think there’s something about working with the same people repeatedly, where you just build up trust in a shorthand. They know me, I know them. It’s not unlike the dynamic I have with the actors from Zombieland. You know, this was the first movie I made without an actor from Zombieland. There’s something about repeatedly working with the same people that you can kind of skip a lot of the steps and just get to the essence of what’s important. And I think the same thing applies with the studios that they can be really direct with me and I can be really direct with them. When I tell them something is really important, they know I’m not kidding around. And when they say, this is really important to us, you know it’s reciprocated.

If I’m not mistaken, Uncharted is the biggest film you’ve tackled in terms of scale. Did you find any challenges in upping the ante with the action and visuals?

Ruben Fleischer: Oh yeah, it is without a doubt. The video games set the bar really high when it comes to the action. I wanted to make sure we at least met that level because that is such a distinctive aspect of the games. I wanted to make sure that we were delivering upon it. But the biggest challenge of making this movie is kind of the elephant in the room, which is the pandemic. We shot this movie at the height of last summer’s early days of COVID in Germany. Learning how to make a movie in that environment with masks and a lot of remote aspects to it and daily testing, we had to limit the number of extras and other things in certain scenes, that was the biggest challenge, bar none.

Because you mentioned Zombieland and we just talked about sequels, have there been any thoughts in your head about returning to that universe for a third film?

Ruben Fleischer: Yeah, I’d do it tomorrow! We joked that it should be every 10 years because the second movie was 10 years, almost to the day, from the first. I like the notion that maybe in 2029, we’ll get to go back to that world with those people who would certainly be fun to see. You know, what are they up to with that much time passed? Emma [Stone] was the one who actually suggested doing one of these every 10 years. She made the joke that we can literally do it forever because Woody [Harrelson] is gonna outlive us all. Because he’s vegan, he’ll be around longer than any of us (laughs). So as long as there’s a desire for it and the cast is up for it, I mean, it’s the greatest experience of my career. I’d be thrilled to reunite with those guys.