‘The Bubble’ Review – Yet Another Covid Comedy that Misses the Mark 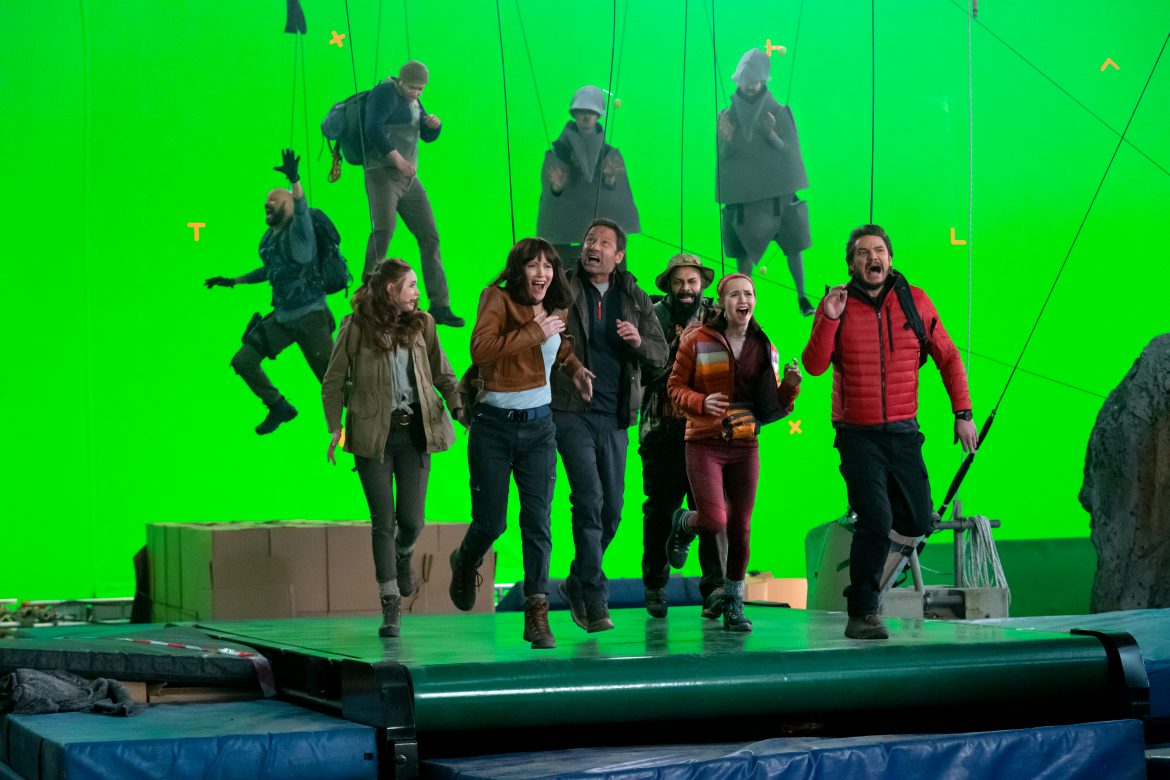 Over the last few decades, Judd Apatow has established a strong name for himself in the world of comedy as both a writer and a director with older hits such as The 40-Year-Old Virgin and Knocked Up to newer ones like The King of Staten Island. His latest flick, and first for Netflix, The Bubble stars his usual family of actors with wife Leslie Mann and daughter Iris Apatow who are now joined by an ensemble of big names including Karen Gillan and Pedro Pascal.

The Bubble follows a Hollywood blockbuster film crew who are stuck with each other in a hotel while attempting to complete a new installment in the fictional ‘Cliff Beasts’ franchise during the early days of the Covid-19 pandemic. It has been said that the film is heavily inspired by the production of Jurassic World Dominion, which was one of the first major films to head back into production under the new pandemic protocals, spending millions of more dollars on testing in the process.

Considering the impact the virus continues to have on not only the film industry but also the daily lives and health of individuals globally, The Bubble can’t help but feel as though it has been made far too soon. The film was announced back in November of 2020, less than a year into the pandemic. Whereas some moviegoers are now able to look back on the early days of covid restrictions and be thankful for the progress we’ve made thus far, others may find that things are not quite far removed enough from that time period just yet, resulting in most of the film’s humor falling flat on its face. If you’re looking for escapism, this probably isn’t going to to hit the mark.

The plot is very repetitive at times, bringing up several characters’ relationships from the outside world which feel nearly impossible to form any tangible connection with, disconnecting us watching at home from the isolation of this cast and crew’s bubble. Though one of the film’s stronger aspects is its ability to shift between the crew’s on-set antics and the finished ‘Cliff Beasts’ movie, creating a critique on the lengths to which some modern studio franchises will go in order to produce lifeless cash grabs.

As a whole, the packed ensemble does a fine job throughout, creating comedic caricatures of Hollywood celebrities. Following her older sister Maude’s continued success, this film is Iris Apatow’s first role in nearly four years. The young star does a great job of capturing the essence of niave content creators who are beginning to shift into Hollywood roles for no reason other than popularity, like say the D’Amelio sisters. Another stand-out is hilarious British comedian Guz Khan, who makes the most of the brief screen time he’s given.

However, some fan-fvorite names are much more underused than others. The most notable of this unfortunate bunch is Maria Bakalova, who just broke into the industry following her Oscar-nomainated performance in Borat Subsequent Moviefilm. Her character surprisingly lacks any depth or individual comedic presence, which is a testament to the film’s writing rather than her ability to perform.

While The Bubble does have its share of funny moments, celebrity cameos, and self-aware quips about the filmmaking industry, the plot does often come across in poor taste. There are multiple occasions where the film attempts to employ satire in order to cover up some genuinely cringy moments that reflect on the pandemic-influenced restrictions, yet they remain obvious. This film is far too long for its premise and would have perhaps been more bearable if it left around half an hour of its run time on the cutting room floor.

The film’s concluding minutes are arguably the funniest of them all, indicating that this story could have worked better if it employed a mockumentary-style filmmaking approach instead. It wouldn’t have been totally original but at least more interesting than what we got. The Bubble is not a film that scores high in terms of its rewatchability factor and likely will not resonate with an audience in the ways it aims to, becoming yet another dull name on a list of premature pandemic fuelled filmmaking.

The Bubble Releases on Netflix April 1!