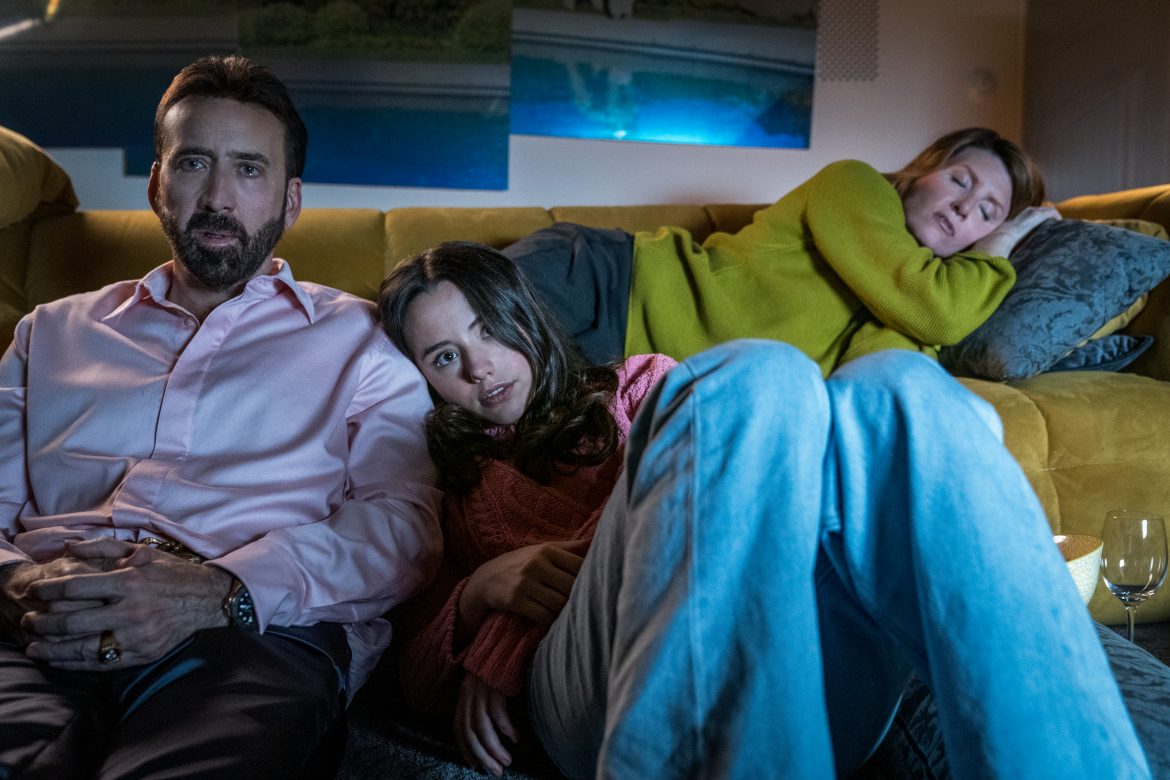 The Unbearable Weight of Massive Talent is the comedy smash of the year to beat, and it’s no surprise. Nicolas Cage plays a washed-out version of himself who has no choice but to attend the birthday of his number 1 fan for a large sum of money. Little does he know, this mysterious superfan can show him the way to reigniting both his career and relationship with his estranged family, more notably his young daughter who isn’t quite the cinephile that Cage would have hoped for. “You don’t need to be a die-hard Cage head to really appreciate this film; it works just as well as an ode to moviegoing, and what’s not to love about that?“ In sitting down with Lily Sheen, who plays Nicolas Cage’s fictional sixteen-year-old daughter Addy in the film, we were able to get to the bottom of why Massive Talent works so well as a love letter to cinema.

Lily Sheen makes her return to the big screen after over a decade, joining a one-of-a-kind ensemble featuring the likes of Pedro Pascal and Sharon Horgan. As the daughter of well-known actors Kate Beckinsale and Michael Sheen, she first got her start in the Underworld franchise, which both of her parents are famous for, of course. However, Massive Talent sees her shine within her own light, even when next to someone as big as Nicolas Cage. We talked to the rising star about how her own relationship with her parents influenced the complex father-daughter dynamic in The Unbearable Weight of Massive Talent, as well as what she learned from Nicolas Cage himself on set. She also tells us her favorite Nick Cage film, which is an excellent choice.

This is your first film in over a decade, what was it like stepping back on set after such a long time?

What was it about The Unbearable Weight of Massive Talent that made you want to return to the industry?

Lily Sheen: I mean, it’s the funniest script I’ve ever read. It’s so unique and original. The writing is so special with all the comedic elements and the absurdism is just one of a kind, so I really wanted to be part of it. I think the rest of the cast can relate to that too. Everyone in this movie really wanted to be there and celebrate Nick, at the end of the day we’re all huge Nick fans. It just felt insane that we were going to be part of Nick Cage’s lexicon of cinema.

On a similar note, do you have a favorite Nicolas Cage movie?

Lily Sheen: That’s an impossible question. I love all of his movies, but one of my favorites is Raising Arizona. The Coens and Nicolas Cage are such a fantastic combination. He’s so great at playing that heightened reality, over-the-top chaos and yet is still completely in control of it. It’s such a testament to how talented he is, that he’s able to really push the boundaries of his characters and the emotions in the script while still keeping it really contained. He’s completely in control, he’s in the driver’s seat and it’s incredible.

The heart of this film is very much the relationship between Addy Cage and her father, who is intensely focused on his art. As the child of two actors, did you resonate with that?

Lily Sheen: To a degree for sure. There are obvious parallels between Addy and myself, but what really opened up the character for me was being able to figure out how I didn’t relate to her and to see the ways in which my life took a different course.

In terms of that father-daughter dynamic, did you start working on that with Nick at all before shooting?

Lily Sheen: He had been a part of this project earlier than I was, so he had really been working on that with Tom [Gormican] the director for a while. I didn’t actually meet him until I got to set but even just on the first day, he was instantly incredibly welcoming to me and so paternal, which was amazing. He really made me feel very safe on set to try and take risks when acting with him. As an acting partner, you couldn’t ask someone better – he’s always going for the truth of the moment and the reality in it, but still helping you to create the performance and to get there with him too.

It very naturally progressed into us having conversations and sharing recommendations of different things and talking about our shared interests. I got to really absorb a lot of knowledge from talking to him and just from watching him work, which is a once-in-a-lifetime opportunity.

How much did you draw from your own experience of navigating those complex teenage years in playing Nick’s own distant daughter?

Lily Sheen: I had quite a different experience. Within Hollywood, there can be so many different experiences and I was really lucky. My family, we are really close and maybe too close, maybe codependent! I always went with my mom on sets and we would spend a lot of time together. The work was obviously important, but it was important that the connection between us was also prioritized.

What this movie does really well is that it showcases, not just in terms of Hollywood but in general, what it can be like if a parental figure is not accepting which is something that I think a lot of people can really relate to. To feel like they’re being jammed into a box or a mold by their parents when they just want to just be appreciated for who they are. What’s also really beautiful is the journey that these characters go on. It ends up being such a give and take situation between them as they learn to take each other for who they are and appreciate each other’s uniqueness.

Nicolas Cage aside, you got to work with great actors like Pedro Pascal and Sharon Horgan, who plays your mom, what was that like?

Lily Sheen: They’re phenomenal. This is the most incredible cast you could ask for and the chemistry is really real between everyone which is what makes the comedy so effective because everyone is having a great time laughing with each other and helping each other get those performances out. Pedro Pascal is just the loveliest person on earth, he’s so sweet and kind, and Sharon Horgan is a genius, I was so impressed. She would be on set being hilarious and making the entire crew crack up and then she’d be heading home to write one of her scripts. She’s always doing something! It was a great learning experience for me.

How many scenes with them were you able to watch from the sidelines, was there anything you learned as a young actor?

Lily Sheen: Absolutely. It was an amazing experience to be able to learn from watching these really fantastic people. We had some time specifically when we were filming some of the car chase scenes. We were all sitting close together in this car and had so much downtime, and we all got to talk about movies. We’re all huge movie fans and we’re all huge Nick Cage fans, but we didn’t want to freak him out. He was still incredibly forthcoming with stories and anecdotes about his own life and lessons.

We were all so receptive to that because of all people, he’s really the person that you trust to give you advice or a recommendation in this industry. He knows exactly what he’s doing and he’s had a dream career. It was special for all of us to connect with each other as artists.

As an up-and-coming woman in the film industry, do you have any advice for women looking to break in?

Lily Sheen: I’ve had a much lucky experience as a female actor with my upbringing so I don’t want to say anything out of turn. All I can say to women is just be you, have a great time, and try your best. I’m so excited that there are more opportunities for women coming up and I hope that through my career, I can create even more opportunities for them to be recognized. Hopefully, we can have more movies allowing women to be completely insane and chaotic in the way that so many other great male actors have been able to do. I’m excited, it’s a good time to be a woman in the industry, but of course, there’s a lot of work left to do.

Finally, why do you think audiences should go see The Unbearable Weight of Massive Talent in theaters?

Lily Sheen: It’s just so fun, hilarious, and the action sequences really tie it all together. If you want to go and have a really great time in the cinema and remember how much you love Nick Cage, then you should absolutely go see this movie. I hope that as many people as possible can celebrate this person that we all love.

Read our ★★★★ review: Cage & Pascal are the Dream Team