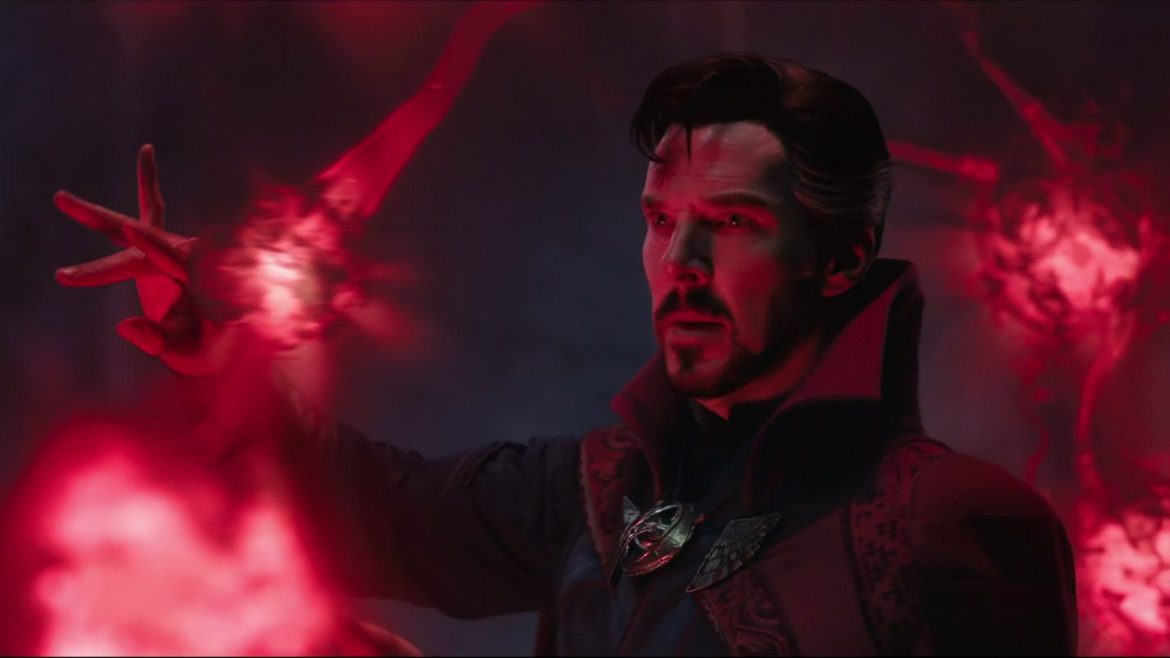 Sam Raimi’s return to the very genre he helped pioneer, Doctor Strange in the Multiverse of Madness, is almost everything starved fans could have hoped for. Against all odds, Raimi’s instantly recognizable touch is present through and through, even surpassing the usual limitations of the MCU at times. From snap zooms to circle wipes to shaky cam in first person POV, the iconic visionary pulls out all the old tricks while fully utilizing the untapped cinematic potential of Doctor Strange to further expand his visual arsenal. Raimi radiates just as much energy and enthusiasm as ever, and it’s all of this fervor that truly saves Doctor Strange in the Multiverse of Madness from completely falling apart. Raimi may be back in full force, but he’s required to juggle the burdens of a franchise that’s beyond his saving.

To say that Sam Raimi saves a sinking ship would be a vast understatement. As everyone knows, original director Scott Derrickson left the project in early 2020 over “creative differences.” Marvel Studios president Kevin Feige then courted a legend back to the director’s chair as a power move to gain back the public’s trust, and it’s arguably one of the most strategic plays made by the famed producer so far given that most of the film’s promo has ridden off the back of Raimi’s name. Just based on these facts alone, Raimi can be initially seen as a “yes man” on Doctor Strange in the Multiverse of Madness – a seasoned filmmaker who can get the job done efficiently without displeasing the studio. There’s nothing inherently wrong with this, it happens in Hollywood all the time, but as Raimi’s proved throughout every single one of his films, this is far from just a quick cash grab.

Doctor Strange in the Multiverse of Madness sees Benedict Cumberbatch’s titular sorcerer butt heads with Wanda Maximoff, who’s now totally embraced her dark destiny as the Scarlet Witch in the misguided search for her lost twin sons. The two former Avengers reach a crossroads when the fate of newcomer America Chavez is up for question. With the one-of-a-kind ability to jump across the multiverse, the young miss Chavez could potentially reunite Wanda with her sons; however, Strange knows that’s a one-way path to self-destruction. This dilemma takes these magic wielders across endless realities and, of course, to the brink of madness. By the time it reveals its true colors, this proves to be a rather simple plot – way more straightforward when compared to No Way Home or Shang-Chi – though it leaves plenty of room to fill in the gaps and get creative with its main conflict, and this is where Raimi rightfully delivers on the promise of the film’s title.

Sam Raimi has always vocalized his admiration for Doctor Strange and comic creator Steve Ditko (who also co-created Spider-Man), and this love is clearly visible on-screen not only in homages to Ditko’s original drawings but just in Raimi’s sheer excitement to finally be able to play with the character. One of the most common complaints fans had with the first film was that the MCU’s introduction to magic was mostly visualized through… sparkle hands? Doctor Strange (2016) certainly has other things going for it visually, yet that criticism still can’t be shaken off. Here, on the other hand, magic in the MCU has never felt so alive. Raimi embraces the imaginative capabilities of Strange to deliver easily the most thrilling and vibrant action scenes this franchise has seen in years. That statement might not sound believable given how often similar comments are thrown around, although when Raimi recently said “I’m going to show those kids how to make a superhero picture,” he sure wasn’t joking.

It’s also an extreme joy to see how much Raimi lets loose by embracing his horror roots. Now, calling Doctor Strange in the Multiverse of Madness a horror film is a stretch, though its unfiltered horror traits can’t be denied. It’s demons, corpses, and guts galore (as far as Marvel can really push with a PG-13 rating for now), and the one character who benefits the most from this pivot is Wanda. Raimi gives Elizabeth Olsen the chance at every corner to make the Scarlet Witch actually horrifying, and she does wonders. In line with Raimi’s past works, his horror comes with a side serving of abrasive, dark humor and innate campiness. Olsen commits to this camp, and steals the show in the process. Some viewers may argue that parts of the film come off as too silly or crude, except it’s not that different from Raimi’s unapologetic taste seen in films like Army of Darkness. This movie knows it’s inherently goofy to a degree with its magic gibberish! And Raimi has a damn good time with this while also keeping a deep reverence for the source material.

Still, for all that it’s worth, Doctor Strange in the Multiverse of Madness is severely held back from matters that are simply out of Raimi’s control. In fact, these same problems have been permeating the MCU for some time now. Aside from a very rough first act, which is easily forgivable in most cases, the film suffers from a lack of character consistency and emotional growth/understanding. Plot threads and arcs established in the first film are either completely dismissed in quick lines of dialogue (like Baron Mordo’s rivalry with Strange) or not fleshed out enough to reach a satisfying resolution (like Strange’s complicated romance with Christine Palmer). This all in return, ultimately, leaves Benedict Cumberbatch’s portrayal of Strange in an awkward stalemate. Returning actors Chiwetel Ejiofor and Rachel McAdams do the most they can along with Cumberbatch, with Raimi only being able to capture a few fleeting moments of their growth, but their arcs feel more like an afterthought in the ever-changing MCU.

Speaking of afterthoughts, America Chavez’s introduction to the series leaves a lot to be desired. Given her powers, she’s treated more like an actual plot device rather than a three-dimensional character. Again, Xochitl Gomez is charming and brings the right level of spunk to the role, yet there’s not that much else to say. The character’s queer identity borrowed from the comics is all but relegated to her wearing a pride flag pin on her jacket, not to mention her Puerto Rican heritage is seemingly overlooked as well, so it’s just another example of all talk and little to no action when it comes to a major studio delivering legitimate representation. Could all of these things be further explored later? Of course, though it feels cheap to save that as a selling point for another day.

It’s easy to see a better version of an already incredibly entertaining movie here. The short runtime isn’t the issue at all, it all comes down to pacing and choosing what really deserved the spotlight when and where. Powers aside, did America Chavez really need to be introduced in this movie? Did characters like Mordo deserve a bigger role given their involvement in the first film? Another major question rises with the ever-relevant debate around fan service, as trailers have already given away some of the film’s major cameos. Unlike past examples where major cameos can either make or break a scene, Doctor Strange in the Multiverse of Madness brilliantly subverts expectations. Unironically, these extra inclusions actually lead to some of the film’s most memorable and hilarious moments. The point stands, if the plan was to further build Strange’s corner of the MCU, was the time spent on these cameos absolutely necessary? Probably not.

Even through its messiness, Sam Raimi elevates Doctor Strange in the Multiverse of Madness above standard tier Marvel. He injects so much personality and heart into the film that even his most devoted followers will be shocked to see how much he was able to get away with. Regardless of how much creative freedom Raimi was given, the weight of its MCU burdens holds it back so much nonetheless. Maybe that says more about the current state of this franchise than anything else! Should things change for the better within the studio, bring back Raimi with more control over the story and the next Doctor Strange sequel could very well be a certified classic. In whatever way people react to the various fumbles in this script, everyone will walk away reminded why Sam Raimi is still the undefeated master of comic book movies all the same.

Read Next: The Filmography of Sam Raimi Ranked

The fumbles in this script were the result of a noob writer, Michael Waldron, who’s never even done a movie before, much less one as big, complicated, and important as this one. Why they didnt get a more experienced writer I’ll never know.