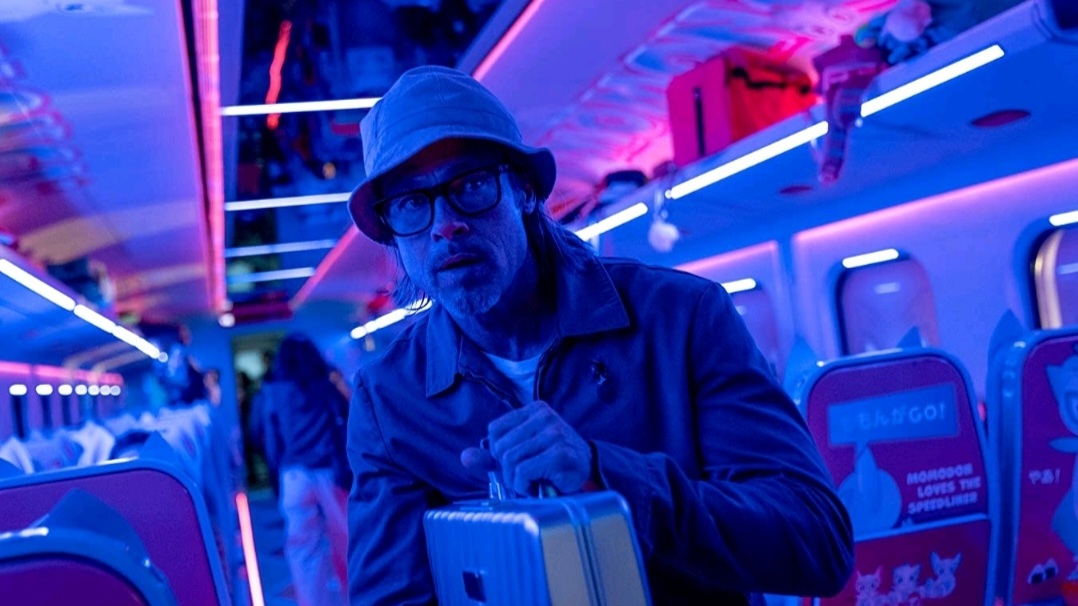 David Leitch’s latest, Bullet Train, is an action-packed ride full of carnage and familiar faces. Brad Pitt, who’s as charming as ever, leads Leitch’s mad ensemble. Surprisingly, Pitt’s role is less of a main lead than expected, as Aaron Taylor-Johnson and Brian Tyree Henry take up a huge chunk of the runtime as a pair of idiosyncratic East End assassins. This is no flaw as the two are a razer-sharp act, cracking endless gags that make for a hell of a time. David Leitch’s humor is definitely the defining feature of Bullet Train; it’s as dark and twisted coming from the mind behind Deadpool 2 and Atomic Blonde but more absurd this time around. The stacked ensemble definitely does most of the heavy lifting as Leitch heavily relies on the charisma of its leads, as when they’re not onscreen, barring a few characters, the film loses steam.

Loosley based on the 2010 comedic thriller novel by Kōtarō Isaka, Brad Pitt stars as “Ladybug”, a hitman and operative for hire who after a series of unlucky events has had some time off and is now only taking easy jobs. His latest gig requires him to travel on a bullet train that departs from Tokyo and retrieve a simple briefcase. But, of course, things get complicated when a slew of old faces and mercenaries are onboard the train as well, making way for a one-way ticket to hell. Despite Ladybug’s occasional attempt to make peace, everyone is on the hunt for the briefcase and this ride barely has enough room for trust and alliances, especially because there is one mysterious person unaccounted for.

Stylistically, Bullet Train borrows a lot of inspiration from Japanese cinema. Soaked in an array of neon lights, indicative of the liveliness and beating heart of Tokyo itself, and backed by the sleek design of the train and other elements of Japanese culture and travel, Leitch’s film feels appreciative of its country setting at the very least. In a similar sense to what his famed companion Chad Stahelski did with the John Wick series, David Leitch really dives into the deep end with Bullet Train being so clearly influenced by classic Yakuza and Samurai films. This is not to say that Bullet Train is on the same level of quality as the John Wick series, that may be up to personal taste, though the same pattern of homage and inspiration can be seen with Stahelski and Leitch. The two only depart ways when it comes to their own particular sense of tone, Bullet Train being far more on the comedic side with suspended disbelief.

There are times when Bullet Train even feels a little bit like a throwback as Kill Bill did, in the way that David Leitch and Quentin Tarantino both appreciate what’s come before them in the genre. Also, Leitch’s stylized flashbacks remind one of the zany introductory titles that Tarantino is so fond of. The film’s neon-drenched cinematography is a great feat, it’s almost always visually enticing even if it can often be superfluous. Cinematographer Jonathan Sela’s camera use only further emphasizes the comedic gags, like a water bottle’s POV witnessing endless carnage or Pitt admiring a smart toilet. Those who have been following Leitch and Sela’s collaborations across their action-oriented repertoire will be able to appreciate how far they’ve come to grow a shared style and vision.

Andrew Koji and Hiroyuki Sanada are two of the best additions to Bullet Train‘s mishmash of characters. Sanada, being the prolific star that he is, delivers some of the most memorable line readings out of anyone, while also stealing the show when it comes to the action, slicing his way through the bloodbath. One role that somewhat feels miscast is Joey King, with her English accent being far out of tune. Some more noticeable accent training would’ve gone a long way, but King still convincingly plays her character with great deceit and manipulation as intended. Bad Bunny’s first major film role can’t go ignored with his music star status and future as the Spider-Man villain El Muerto. As aforementioned, Pitt is on top of his game, effortlessly charming his way through blades and gunfire. However, there should be no misconceptions, by no means is Bullet Train close to the top of Brad Pitt’s most defining work, it is just simply not on that level.

Ultimately, Bullet Train is a wildly entertaining ride that delivers on its action-packed premise. It’s both stylish and obnoxiously funny as David Leitch really hammers home the quirkiness of his colorful cast and the ridiculousness of it all. The ensemble undoubtley elevates Leitch’s intended tone and humor, along with Jonathan Sela’s vibrant and sleek cinematography. Additionally, Bullet Train has a range of shocking celebrity cameos going for it too, resulting in a more unexpected first viewing experience that comes as a bonus to the bright neon chaos.