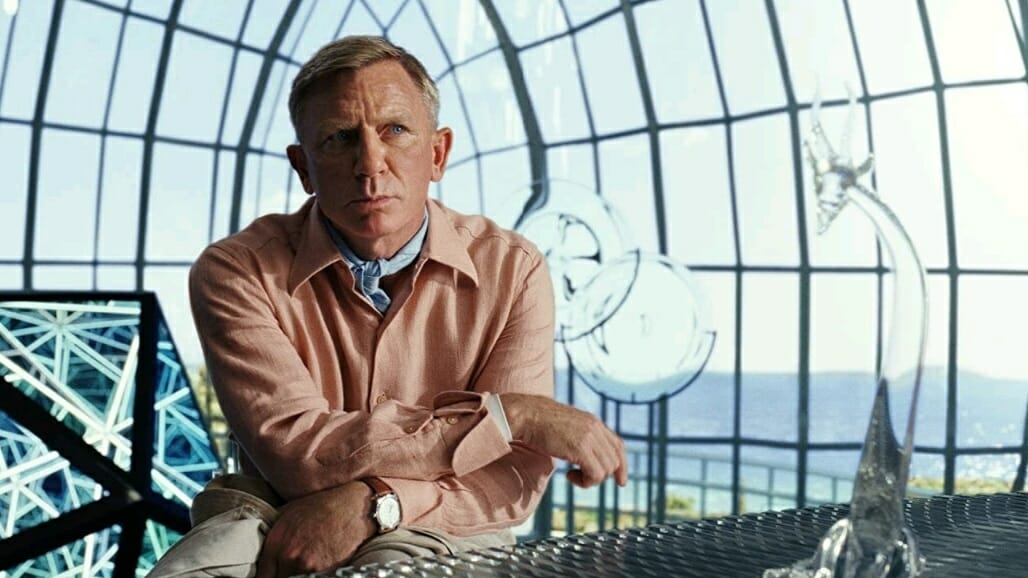 The highly-anticipated sequel to Rian Johnson’s 2019 hit whodunit, Glass Onion: A Knives Out Mystery follows an eclectic group of socialites who have been summoned to their wealthy friend’s private island for a lavish weekend bonding over a murder mystery party. Benoit Blanc (Daniel Craig) gets one of the elaborate invitations sent by Miles Bron (Edward Norton), and off he goes to have a well-deserved vacation after being cooped up in his home with nothing to stimulate his overworked mind. However, all is not as it seems, for Blanc will soon need to deploy his actual detective skills to solve a case after one untimely death rocks this group of friends and their dark secrets.

Rian Johnson has crafted yet another murder mystery that thrives the most when the audience knows as little as possible, so expect to find no spoilers here. There is something to be said about how the current consumption of film has been ruined by spoiler culture and the obsession with knowing every detail before a release, and that could have a huge effect on your enjoyment of Glass Onion if you’re not careful. The only thing to note is that this whodunit is far more ridiculous than the last, and this is by no means a bad thing. Johnson is simply subverting expectations again with his cunning original script.

As is the case with many sequels, the expectations couldn’t be higher. The goal for any filmmaker following up a beloved project is to up the ante through a bigger budget, a larger cast, and, of course, bolder ideas. Rian Johnson complies yet offers a few exciting curve balls to throw us off balance. Knives Out was a reasonably standard whodunit, with an ensemble of suspects with similar or varying reasons to commit the crime. In the end, Johnson cleverly utilized that set-up to provide a critique of the wealthy and commentary on the state of racial divides in America. You might expect the director-writer to steer away from these themes in a sequel to craft a new story that stands on its own, but he instead hyper-fixates on tackling the ultra-rich and their less than stellar track record of telling the truth and doing good.

Rian Johnson cranks up his unique sensibilities to eleven in Glass Onion. He puts an even stronger emphasis on the absurdity and humor that can be drawn from these clownish caricatures and the mystery at hand. Glass Onion, in more than a few ways, is genuinely having a blast with the type of people Johnson rightly believes are deserving of ridicule. And many watching will absolutely feel exactly the same way. Whereas the characters in Knives Out were written as more generalized examples of certain tropes, the characters in Glass Onion will surely remind you of specific people in today’s frantic media.

For starters, Edward Norton’s Miles Bron is clearly a statement on Elon Musk and his foolish antics. This goes on with most of the ensemble, such as Kathryn Hahn’s Connecticut governor Claire Debella, Leslie Odom Jr.’s scientist Lionel Toussaint, Kate Hudson’s supermodel-turned-fashion designer Birdie Jay, and Dave Bautista’s Youtube men’s rights activist Duke Cody. These are all amalgamations of real figures who plague society and always have it coming when it comes to being mocked. Rian Johnson has hilariously found his niche with high-concept projects crafted to say something about the current state of reality, specifically, the great divide between the rich and the poor.

Although, unlike the ensemble of Knives Out, there is a distinct lack of chemistry within this larger-than-life group. Despite a promising first act, roles like that of Jessica Henwick’s are then severely underutilized, undercutting the potential for more riveting interactions across the suspects. Madelyn Cline is the Katherine Langford of the cast, a young starlet whose most notable credit is Netflix’s Outer Banks. Like many others, Cline is in the film just barely enough to make an impression. Though musical icon Janelle Monáe is the story’s true focal point, with her turn as Cassandra Brand being a major step forward in their career as a leading actor. Monáe gives a vibrant, layered performance that asks her to be the emotional anchor of the entire mystery, and she delivers sublimely. Aside from Craig and Norton, she is the only cast member that has a significant impact on screen.

Glass Onion is meticulously crafted, and the architecture for a successful murder mystery is clearly present. Rian Johnson recognizes and deploys the tactics needed to constantly test the audience and push the envelope of what is expected from a whodunit. However, while Johnson is having the most fun with the genre and its archetypes, he slightly misses the mark in crafting a convincing group of “friends.” The first act showcases the oddity of this strange group being in the same social circle, which is a fixture in the narrative. You just wish you could then see more of these offbeat characters interact in ways that show off their personalities in any significant way or intriguingly utilize their specific professions. Not everone is expected to steal the show, but given this all-star cast, much is left to be desired.

Be that as it may, Rian Johnson has a fantastic handle on what he wished to accomplish with Glass Onion: A Knives Out Mystery for all it’s worth. With the surprise success of his first film looming large over this production, and Netflix’s Knives Out franchise still not over, Johnson proves he can embrace the unexpected while also still embracing what works for him. He cleverly folds in real-world issues to make a point not to satirize them to exhaustion, but in a way that never distracts from the thrills of Beniot Blanc’s quirky adventures. Rian Johnson has expertly pulled off the whodunit twice now, and Glass Onion is proof that he can definitely do it again.

Glass Onion: A Knives Out Mystery premiered at the 2022 Toronto International Film Festival. The film releases on Netflix December 23!

Ferdosa is a lifelong student of cinema. Her favorite genres include noir, gothic horror, romantic comedies, and science fiction. As a major proponent for diversity and the advancement of women in the industry, Ferdosa always seeks to explore art made by marginalized voices. She aims to be a film festival programmer one day. Outside of DiscussingFilm, her words can be found at Muses of Media, Screen Rant, Screen Queens, and Geeks of Color.