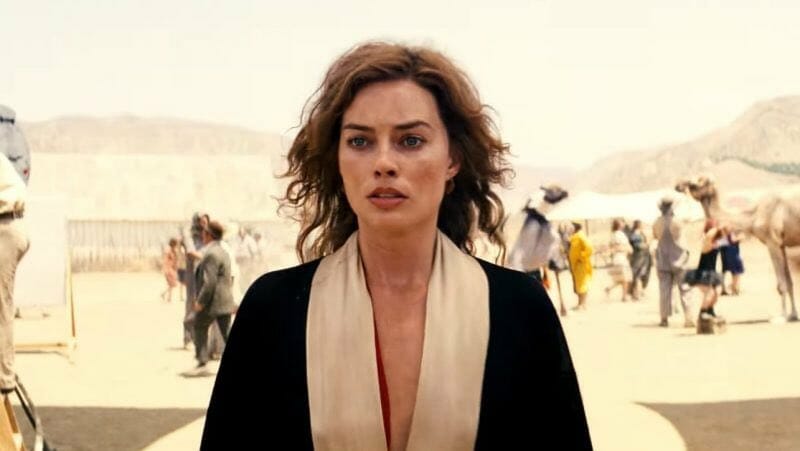 Only twelve years after his feature debut Guy and Madeline on a Park Bench, writer-director Damien Chazelle has had a meteoric rise to success. He’s helmed two original films that instantly nestled into cinephile canon, Whiplash and La La Land, and holds the title of the youngest-ever Oscar winner for Best Director. While his quieter Neil Armstrong biopic First Man didn’t open to the same sung praises and awards season boon as before, his sentimental depiction of the first moon landing proved his wider range as a storyteller. To sell him short, there’s no one buzzier than the man who nearly single-handedly revived the prestige of the movie musical. Now, Damien Chazelle flexes all of his accrued muscles in Babylon, a monstrous and ambitious historical epic about classic Hollywood. A wild experience filled with a seemingly endless love for cinema, Babylon will grab you by the imagination and never let go.

Across its over 3-hour runtime, Babylon skips around in early Hollywood’s history and features a small ensemble of characters, following their challenges as the industry makes the shift from silent films to talking motion pictures and the world as they know it comes crashing down. We’re introduced to protagonist Manny Torres, a Mexican-American aspiring filmmaker played by Diego Calva, in the lead-up to a raunchy 1920s house party in the Hills, where he works to care for its many A-list guests. Here, Manny rubs elbows with a loose cannon and self-described natural starlet Nellie LaRoy (Margot Robbie), beginning a movie-long will-they-won’t-they romance.

When LaRoy is whisked away for her first-ever movie gig and rockets to superstardom, Manny gains the favor of this era’s biggest movie star, Jack Conrad (Brad Pitt), and earns a front-row seat to the drama of movie-making when the advent of sound comes a-knocking. Along the way, Manny and Nellie cross paths with African-American jazz trumpeter Sidney Palmer (Jovan Adepo), industry journalist Elinor St. John (Jean Smart), and Asian-American actress Anna May Wong (Li Jun Li). Like a roaring wave of fear, excitement, and everything in between, this new era changes everything in Hollywood – and Babylon brings you along for the ride.

The powerhouse soundtrack of Babylon helps to drive home this timeless duality of time and place. A needle drop of “Night on Bald Mountain” with a live orchestra playing to battling armies makes the film feel bigger than ever, and the appearance of the song “Singin’ in the Rain” places Jack Conrad behind-the-scenes on The Hollywood Revue of 1929, where MGM had all the biggest stars sing and dance to the classic, all before Gene Kelly ever considered swinging around a streetlight pole.

Even when original music exists within the scene, Damien Chazelle’s career-long collaborator and composer Justin Hurwitz crafts the performed score to have a foot in both the past and present, with classic big band instrumentation leaning into modern sensibilities. To inject further energy into the drug-lathen chaos of this realized world, hip-hop and EDM influences sneak their way into the mix and add a thwump-thwumping kick to the nightlife of Babylon that also comes close to our own 21st-century tastes.

This anachronistic commentary of Babylon feels embodied even in its casting. Brad Pitt’s Jack Conrad is an aging actor who’s edging out of his prime and losing touch with popular sensibilities. Not that Pitt is due for retirement, but he does seem to be tapping into something real here, afraid of losing the success and talent that defines his place in the most magical city in the world. There’s a natural flavor of effortless, confident ego that textures his jaunt as the famous Jack Conrad which equates to an incomparable screen presence among the ensemble. Margot Robbie enjoys a similar inherent gravitas, drawing eyes every time she’s on screen with her flamboyant portrayal of a beautiful and talented superstar on the rise. For her as well, it’s hard to separate Nellie LaRoy from the Aussie native that brought her to life.

On the flip side, Diego Calva hands in the most complex and layered performance of the bunch, although his quieter, more humble character just can’t quite stack up against a line-up of celebrity-status actors playing celebrity-status actors. For Calva, Babylon is very much a story about building a name for himself, both narratively and metatextually, yet it’s somewhat hard to recognize his work when paired up with such eye-catching legacy stars.

One evident challenge of Babylon was avoiding the glorification of Hollywood’s seedy underbelly. Realized through elegant camera work and gorgeous production design, the house parties of pre-sound Hollywood are vivacious and electric. Damien Chazelle is having as much fun as ever with cinematographer Linus Sandgren in Babylon, moving the camera around in elaborate one-takes across multiple stories of chaotic mansions. However, through all the elation, the reality of these parties is that it’s not all glitz and glamor. But just like in Whiplash, where he refuses to hold viewers by the hand, Chazelle leaves those judgments up to the audience, instead focusing on the character’s pure emotional arcs. For some, the film’s greatest strength will also be its greatest weakness. A film about film among other things, Babylon spends a lot of its time dissecting what movies mean to the people who make them as well as watch them.

Perhaps the greatest symptom of this, the film has more than its fair share of cinema-impassioned monologues. At what feels like every scene transition, one of Chazelle’s many characters is espousing a long-winded rant about how great movies are and what they mean to people. While none are particularly out of place, these moments conjure reactions from admirative profundity to “Yeah, we get it. You like movies.” Though as its characters begin playing in the world of talkies, Babylon attempts to grapple with the nature of film as an art form. Questions of kitsch and “lesser art” pit cinema against theater’s classically respected reputation, but Damien Chazelle spends the entirety of Babylon painting a portrait of people whose lives are so deeply intertwined with their love of cinema that the answer is etched in every frame.

Chazelle’s cinema-obsessed gaze comes to a head at the film’s climax in perhaps his most indulgent scene ever, bringing together… all of cinema in a single sequence? It’s hard to pin down whether it’s necessarily earned or not, and more than any other scene in recent memory it comes extremely from left field. However, the impression it leaves is remarkable and unmistakably apt, recontextualizing Babylon from being about its characters’ experiences to that of society and cinema itself. As if the rest of the film wasn’t enough, this scene alone will leave your eyes and ears ringing with sensory overload: a powerfully moving closer that somehow manages to epitomize Chazelle’s more brassy sensibilities as a filmmaker. Babylon works double time to find its place in Damien Chazelle’s filmography alongside some of the most renowned endings in cinema history – and it earns it.

For better or worse, Babylon is a film far more concerned about feelings and experience than plot and story. It’s a tale of epic proportions, and as such, some threads are left underdeveloped with unfulfilled potential, but the greater presence and scale of the film leave the impression of an inhabited world beyond the cuts and edges of the frame. Babylon is the closest Damien Chazelle has come to a slice-of-life picture so far, yet it doesn’t quite lower its pace to the distilled, meandering quality of that genre. Despite having its ebbs and flows that demand according levels of audience interest, Chazelle’s explosively crafted third act is sure to thrill and surprise with Tobey Maguire taking center stage as a silly little guy who happens to be a kingpin of LA’s last remaining underground circles.

If viewed as a companion piece to La La Land, Babylon is a much less sanitized look at art and a deeper dive into Hollywood itself, though they share many of the same ideas and fervor toward creative endeavors and identity. Some sharp-eared viewers will recognize these similarities as they hear musical remnants of “Someone in the Crowd” in Justin Hurwitz’s many reprises of an original standard “Gold Coast Rhythm,” no matter how many times the composer denies any intentional homages.

In capturing some of the most grotesque images of his career, Chazelle makes a film that despises the city with which it’s enamored. It’s jam-packed and arguably ham-fisted, but its huge beating heart will leave you reeling. In a tongue-in-cheek musing that “all art aspires to the nature of music,” Damien Chazelle seems to excuse his own messiness for artfulness and creativity. Is Babylon perfect? Maybe not, but neither is Hollywood. Embrace it, or leave it.