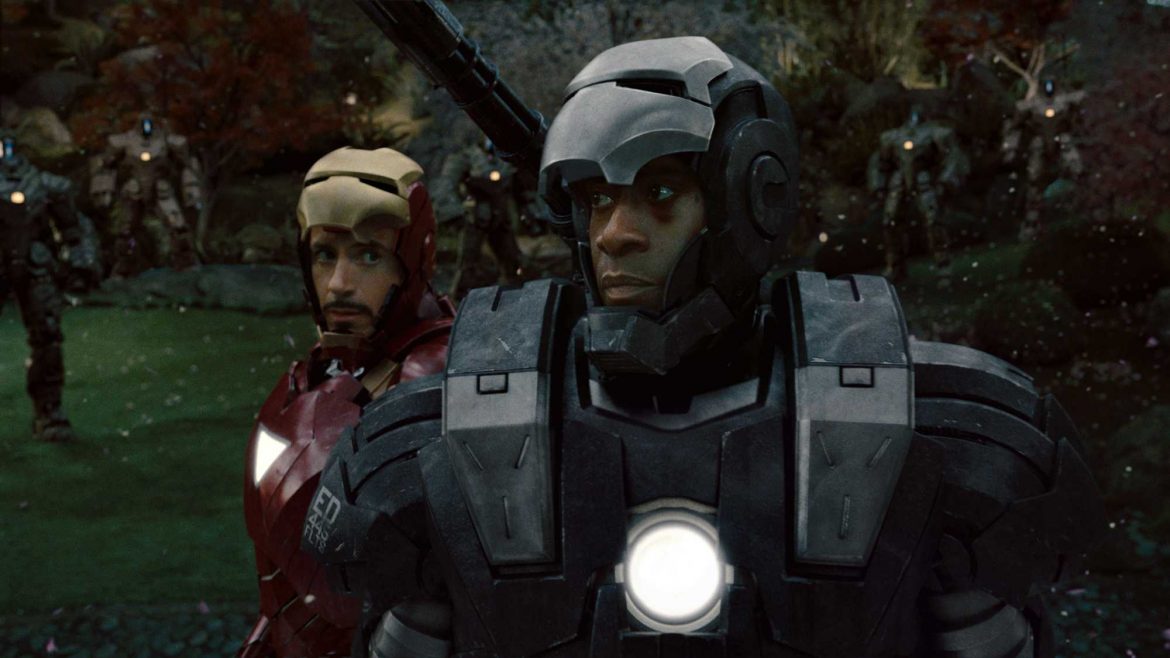 Some people call me a terrorist, I consider myself a teacher. Yeah okay, that’s from Iron Man 3, but I feel the need to get it out there because what I am about to say is sure to get me burned at the stake.

Iron Man 2 is easily the best of the Iron Man trilogy, and is one of the best films of the entire Marvel Cinematic Universe. I am prepared to be attacked for this, and I will stand by it until my dying day. Iron Man 2 improves upon its predecessor in every conceivable way. Better characters, better action, better story, better effects (there’s a ton of practical Iron Man suits!), and better filmmaking technique overall. It surprises me that this was made by Jon Favreau again, it almost feels like a completely different movie compared to the first one. 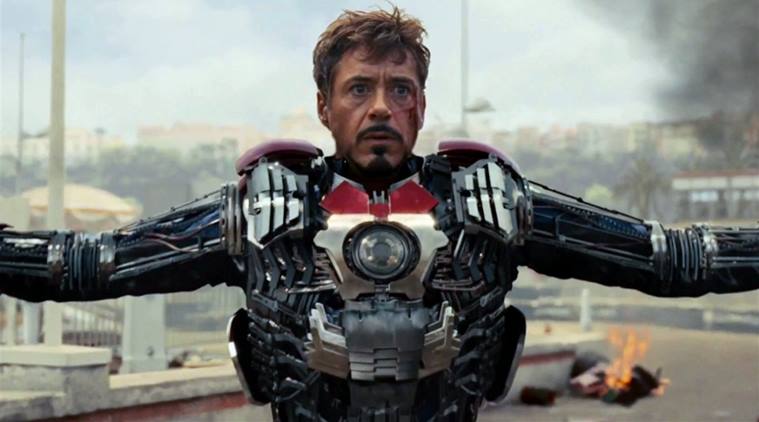 The story this time around is more personal. Iron Man 2 is one of the only MCU films that deals directly with how the world changes from the events of these films (Civil War does this as well). The government is demanding that Tony turn over his suits; they’re viewed as weapons of mass destruction. Meanwhile, the public adores him more than ever before, going absolutely ballistic anytime he flies in. He’s a real life superhero who has “successfully privatized world peace”. The Iron Man suit is an unstoppable force that no one can get even close to challenging. Enter Mickey Rourke’s Ivan Vanko, the son of Howard Stark’s former partner in invention. Ivan feels that he and his father deserve the same glory that the Starks have enjoyed, and builds his own arc reactor (the power source of the Iron Man suits). His goal is to make God himself (Tony) bleed, so people will cease to believe in him. “There will be blood in the water, and the sharks will come.”

Ivan Vanko is helped along by Justin Hammer, played by Sam Rockwell, who is the best part of the whole movie. Sam Rockwell is an incredible actor, and his portrayal of Hammer is my personal favorite performance he’s ever given. He’s a not-so-subtle version of what Tony Stark could be. Every single word out of his mouth is gold, and the villain dynamic of these two bad guys who don’t like each other and don’t get along (Ivan’s rough, raw, violent genius clashes hilariously with Hammer’s spray-tanned, privileged, incompetent businessman), is easily one of the MCU’s most fun aspects to date.

Tony’s best friend Rhodey (Don Cheadle replacing Terrence Howard, and the world is better for it), is an Air Force colonel who’s been tasked with taking the Iron Man suit off Tony’s hands. This leads to a strained relationship between the two, culminating in Rhodey suiting up for the first time and fighting a drunk Tony (and destroying his house) for possession of the Iron Man technology. Tony proves that he’s no longer suitable (pun intended) for it, and his life keeps spiraling out of control. Why’s this? Because Tony is dying, the power source keeping him alive is, at the same time, poisoning him. It is in this film that we see Tony Stark’s true curse: Everything he builds to solve problems only creates even bigger problems. Tony creates the Iron Man suit to help keep the world safe, but it instead leads to the world becoming an even more dangerous place, with enemies like Justin Hammer creating their own Iron Man suits and others like Ivan Vanko stepping up to challenge Tony and prove he’s not the only super powerful being around.

You’d think that Tony would be at the top of his game, having achieved a level of success, fame and stability that dwarfs where he was in the previous film. But his self destructive tendencies are worse than ever before, and it gets to the point where the people he loves get put in harms way because of it. There are two heartbreaking scenes in this film: Tony and Pepper (one of the only love interests Marvel has been able to really sell to audiences) sit together on a plane, and Tony suggests they go somewhere, anywhere, just the two of them. Pepper tells him that’s impossible considering the current circumstances (this scene is directly after Ivan attacks and nearly kills Tony in front of everyone at a race). Tony is unable to tell her what’s really going on, that he’s dying and can’t fix it. The pain on his face is clear. The second scene has Rhodey going down into Tony’s basement, to tell him off and let him know he needs to get his act together unless he wants to lose his tech to the government. Rhodey finds Tony sitting alone, in the dark, seemingly attempting suicide. He’s purposely neglected to switch out his arc reactor for a fresh one, and his blood toxicity is lethal. Rhodey saves him and the two share a moment together, with Rhodey’s face fraught with concern. 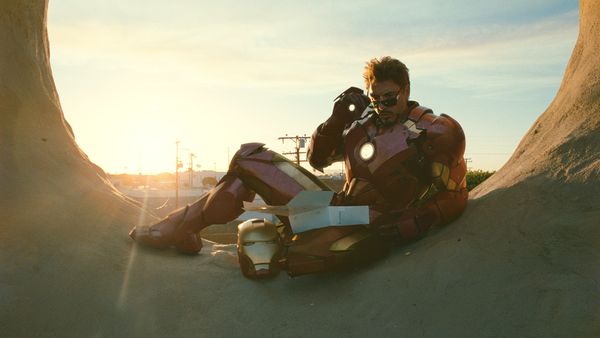 Tony reaches his absolute lowest point in this film, to the previous scene I mentioned to one not long after, where he decides to forfeit all responsibility and throw a huge party at his house. He wears his Iron Man suit, gets completely drunk, and starts blasting things with people around. He then fights his best friend and lets him fly off with his technology, which he knows is only safe in his own hands. Thanks to a deus ex machina by way of Nick Fury and the agents of S.H.I.E.L.D., a cathartic emotional moment where Tony learns that his father really did love him, and the invention of a literal new element, Tony gets back on his feet and is ready to be a hero again. People say that the first film is basically a character study, but I’d say that this one is even more so.

The finale still stands as one of the best and most exciting of the MCU. Tony and Rhodey, Iron Man and War Machine, back to back against an army of Hammer drones and Ivan Vanko, now fully realized as Whiplash. And it all goes down in a Japanese garden, cherry blossoms and all, which serves as a breathtaking and unique setting. It’s a brilliant homage to the classic cinema of Japan; what’s more Japanese than a crazy mech battle?

Iron Man 2 isn’t a perfect film (maybe there’s too much going on) but it ups the ante in every way, and unlike the first Iron Man and The Incredible Hulk, it marks the first entry in the MCU where Marvel Studios came into their own style: cheeky self-awareness (“It’s me, I’m here, get over it.” is the first thing the new Don Cheadle Rhodey says to us; Tony refers to the Avengers as a “super secret boy band”) that never takes itself too seriously while still somehow retaining the weight of the emotional stakes. Well, most of the time. The Tony vs Rhodey fight is supremely undermined by it being set to “Another One Bites the Dust” for some baffling reason. But Iron Man 2 is, above all, a really fun time at the movies, and thats what Marvel Studios would consistently become known for.

“Never has a greater Phoenix metaphor been personified in human history” Tony says to a screaming crowd. This is true not only for the Tony Stark of the MCU, but for Tony Stark / Iron Man as a comic book character in general (he was very much a B character before the 2008 film), Robert Downey Jr. himself, and a formerly small, independent studio by the name of Marvel Studios. Iron Man 2 was Kevin Feige and company reaping the rewards of Iron Man’s groundbreaking success, and they were still only getting warmed up.

Connections to the MCU: Black Widow’s first appearance! It’s too bad Jon Favreau still seems to be pandering to the male gaze; Natasha Romanoff is a bit too overly sexualized in this film. Justin Hammer returns in a Marvel One Shot later, prison jumpsuit and all, and his company, Hammer Industries, supplies weapons to numerous baddies throughout the MCU, most notably providing bullets that can penetrate Luke Cage. Agent Coulson stumbles upon an old prototype of Captain America’s shield in Tony’s workshop, and Nick Fury mentions that he has bigger problems in the southwest region to deal with. That problem is the arrival of the God of Thunder himself, the mighty Thor, who we’ll be talking about next time.