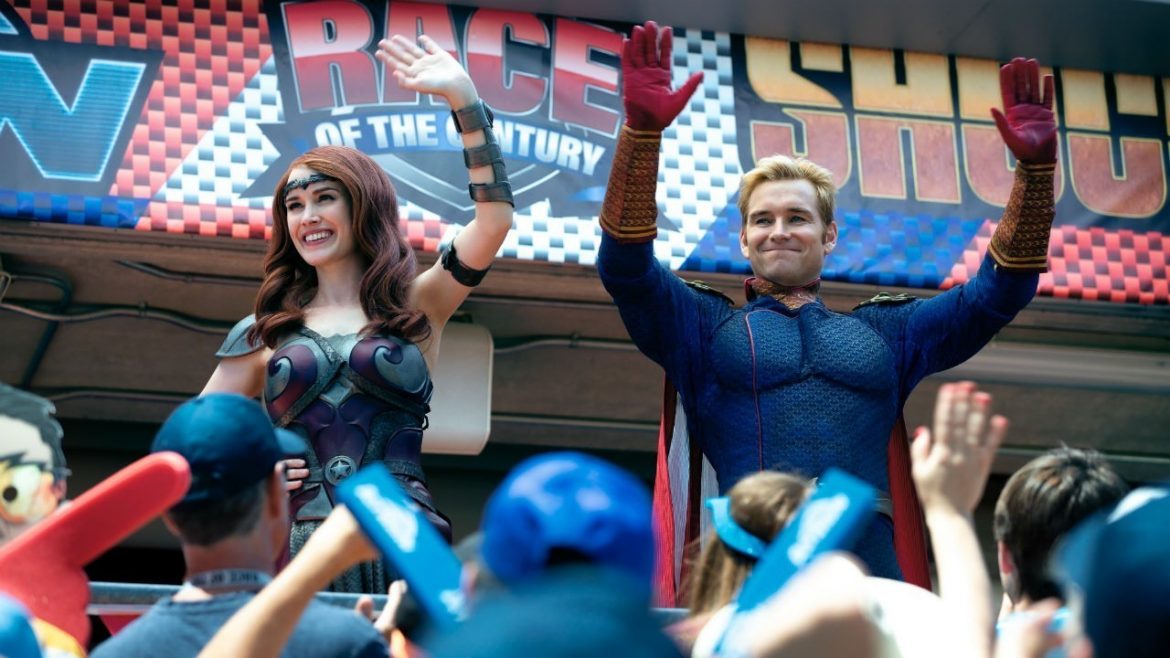 2019 has seen three separate superhero-based properties reach the $1 Billion Club at the box office–four if we cheat and include Aquaman, which was released at the end of 2018.  One of those properties became the highest grossing film of all time, breaking all kinds of records along the way. While superhero and comic book-based material on film and TV has been around for decades, the genre is at the height of its powers and popularity, and doesn’t seem to be dying down. Amazon’s new series The Boys takes complete advantage of that and provides not only one of the best live action properties based on superheroes, but is a borderline perfect viewing experience that is enjoyable from beginning to end.

Based on the graphic novel series written by Garth Ennis and Darick Robertson that ran from 2006-2012, The Boys is brought to the screen by Eric Kripke (Supernatural) as well as the dynamic duo of Seth Rogen and Evan Goldberg (Preacher) with great success as they are able to adapt the highly stylised and sometimes over the top theatrics that delve into the behind the scenes world of the superhero, as well as the effect that these superheroes have on the common folk and the collateral damage that they leave behind while playing hero. On that note, when the superhero or “Supes” action is taking place on the show, it is amazing, but throughout this first season it isn’t very frequent. Although it lacks the amount of action you expect in a modern day superhero show, it is the mostly excellent and well written characters that are the heart and soul and offer something different to what we are used to in this genre on both film and TV.

The series begins with us meeting Hughie Campbell (Jack Quaid) who is just a regular guy. He has a steady job, lives with his Dad (Simon Pegg) and has a good relationship with his girlfriend, Robyn. However, we are thrust into the world of superheroes and their effect on the common folk through the eyes of Hughie in the worst possible way. This sets Hughie down the path of meeting the “Boys” and their plan of action against these “Supes” takes shape. This group of vigilantes features their leader Billy Butcher (Karl Urban), Frenchie (Tomer Kapon), Mother’s Milk (Laz Alonso) and The Female (Karen Fukuhara). The Female is the only super-powered member of the group, with a backstory that links into the corporation world of the superheroes that will hopefully be explored more in the second season. And while we are seeing most things with this group through the eyes of Hughie, it is Urban’s Billy Butcher that is the stand out.

Similar to Hughie, Billy Butcher had his life thrown into turmoil due to the interference of the superhero world and has been on the hunt for those responsible ever since. Urban absolutely nails every scene he is in, whether it be dramatic or comedic. One scene at a Christian faith gathering had me in stitches. One of great solemnity is needed when leading this group of vigilantes and rogues, and Karl Urban has plenty of that. It’s honestly award worthy.

On the other side of things though, the superhero group we hang out with is known as the “Seven,” run by a corporation known as Vought International. Throughout the season, we see the group through the eyes of new member Annie January, a.k.a. Starlight (Erin Moriarty), who is basically the Hughie-type character for the Supes. The Seven aren’t just heroes–they are celebrities and are a business. They have their own movies in the VCU, the Vought Cinematic Universe. No idea who they are poking fun at there. In the already confirmed second season, they have said one episode will be one of these movies, which I can’t wait for. We get to dive into the lives of the Seven which is really interesting apart from one character, Black Noir (Nathan Mitchell). But that is for good reason, which I’m sure we will see play out in the second season.

Homelander (Antony Starr), like Billy Butcher for The Boys, is their emotionally enigmatic leader who on face value can just come across as an “Evil Superman,” but his story is more complex than that and is a joy to delve into throughout the first season, with an amazing cliffhanger to end leading into season two. Every scene with Starr’s Homelander is tense as he is so charismatic as well as unpredictable. He is the epitome of the corrupt nature of this universe’s superheroes, and his heat vision should go down as a national treasure. Alongside Homelander, we have Queen Maeve (Dominique McElligott), A-Train (Jessie T.Usher), The Deep (Chace Crawford), and the previously mentioned Black Noir. Assisting The Seven, we have the VP of Vought International, Madelyn Stillwell (Elizabeth Shue), who is alongside both Urban and Starr in regards to great performances this season. An honourable mention must go to Chace Crawford as well, who does a great job with The Deep, especially with the grey area that the character finds himself in throughout the season.

The only real weak point for this opening season of The Boys, outside of the already mentioned lack of superhero action, is that of Moriarty’s Starlight. Every scene with her just feels like someone is not just lightly pressing their big toe on the brakes…but someone is slamming down on them with the force that Homelander would crush a terrorists skull with. This is in line with the source material though as Starlight was never a standout character in the graphic novel. Moriarty does try in this role, you can tell, but it does just feel like a miscast. I do respect some changes in regards to the more tormenting parts of her story in the graphic novel for the show, as they may have come across as too much for the series.

Overall, The Boys is an absolute blast and is must-watch television, with almost perfect pacing, gripping storylines and great performances by the leads of each group in the form of Urban’s Billy Butcher and Starr’s Homelander. It keeps you hooked, and then goes on with its over the top, gratuitous action. Hopefully, the confirmed second season will involve some more superhero action.

“The Boys” is streaming NOW on Amazon Prime Video.

It was close to television perfection.

Only disagreement I have is, I felt Moriarty was “fine”. Didnt steal the show, but didnt hinder it.

Great review! Couldn’t agree more with it. As you said, superheroes are here to stay and The Boys further dispells any notions of superhero fatigue. Even I wasn’t that big a fan of Starlight’s character, but Anthony Starr and Elizabeth Shue as Homelander and Madelyn were just phenomenal.

If you are interested, do check out my review as well:
https://letstalkcinema.movie.blog/2019/08/24/the-boys-season-1-review/