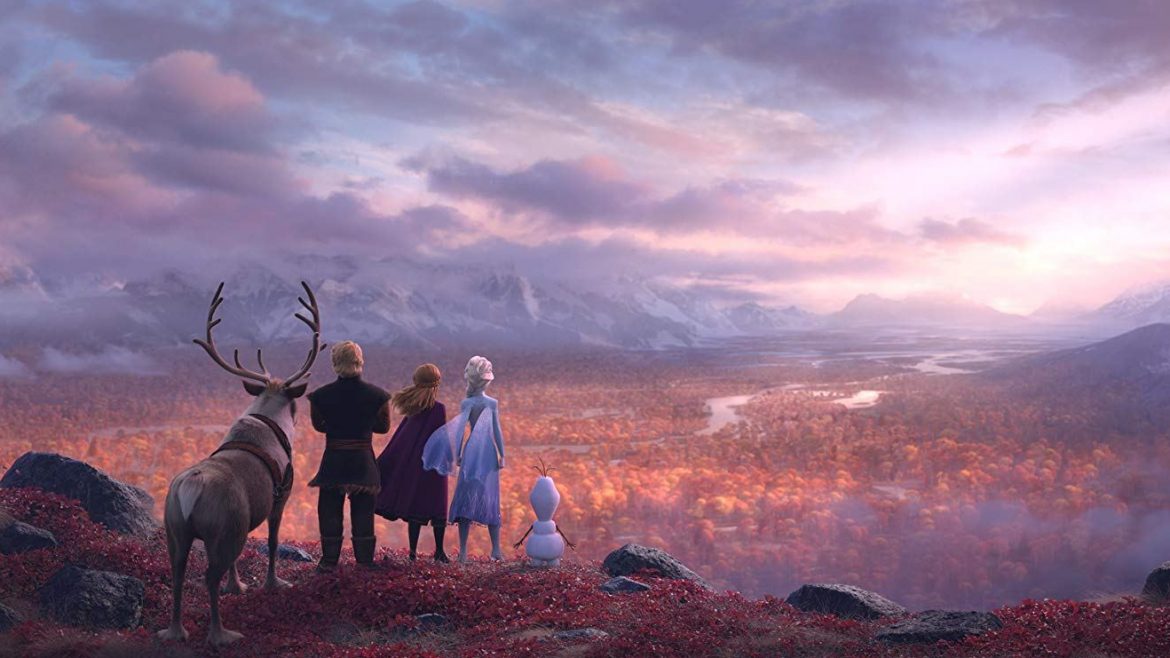 Proper theatrical sequels to Disney animated films are a very rare thing. Not counting Pixar, the only animated sequels that Disney has given a wide release are The Rescuers Down Under, Return to Never Land, The Jungle Book 2, and Ralph Breaks the Internet. Frozen II is the fifth one to be added to this exclusive list, but it does have one distinction all its own. It is the first theatrical sequel to a Disney princess musical.

A second Frozen movie was inevitable. The original, which came out six years ago, demolished box office records. It crossed the $1 billion mark in becoming both the most successful animated film of all time and an essential piece of pop culture. This is already a lot for a sequel to live up to. Not only does it have to justify its existence and prove itself to be a story worth telling, but it has to do this with the monstrous success of the original looming over it.

The gang returns courtesy of Disney

Jennifer Lee and Chris Buck return as directors and writers. However, this time in the writing room they have the help of Kristen Anderson-Lopez and her husband Robert (the two of which also wrote the songs for both films), as well as long-time Disney animator Marc Smith. The team goes broader in their storytelling, expanding the magical fantasy setting and delving deeper into its themes of anxiety, loneliness, and depression. The result is something that offers much more mature and complex ideas than you might expect from a franchise that features a talking snowman who often chases his own butt.

Following the thread left by Ralph Breaks the Internet and Toy Story 4, which saw how even longtime companions can grow beyond each other, Frozen II has a message of transformation. It is a somewhat challenging but necessary lesson, not just for its younger audience, but for older viewers as well. This concept that Disney has recently been going for can be appreciated- the bittersweet idea that fairy tale endings can evolve and that most things cannot last forever.

Following in step with its themes, the film’s music has a far more mature feel altogether. Gone are the bouncy Broadway-style numbers of the first, replaced by much moodier modern pop-sounding songs. Apart from Elsa’s early showstopper “Into the Unknown”, few of them will get stuck in your head as easily as the original’s. Although, the musicality and lyrics behind the new songs are far more interesting and technically impressive. These pieces combined with the movie’s striking visuals and phenomenal animation make for breathtakingly beautiful sequences. Many of which could be considered some of Disney’s very best among an already remarkable list.

Even the humor feels more refined this time around. Olaf (Josh Gad) still has moments of silly slapstick, but his babyish persona is swapped for an older and wiser one (or so he thinks). This imbues him with a more extensive vocabulary, making his jokes much wordier and cleverer than before. Whereas the talking snowman might have been a source of aggravation for older viewers in the first film, his humor is now much skewed towards those very same people. Olaf’s song, “When I Am Older”, is the funniest bit of the entire movie- perfectly capturing the current feeling of morbid acceptance in a world out of control.

All of these elements are exceptionally powerful on their own and are certain to elicit strong emotional responses from audiences. Unfortunately, they are only the undercurrent of what the film essentially is, a fantasy epic. Frozen II’s story is jam-packed with multiple characters and plot lines, but many of them threaten to crumble under the weight of each other. The narrative stretches itself thin and needs a tighter focus. Going bigger can certainly be good, but not when it results in several story threads feeling underdeveloped and unsatisfying by the movie’s end. It often feels like a lot was lost in editing; like it was originally a much longer film that got cut up to fit the appropriate length of an animated children’s film.

Frozen II opens with a flashback showing the two royal sisters of Arendelle, Anna (Kristen Bell) and Elsa (Idina Menzel), being told a bedtime story by their father (Alfred Molina). It is a tale of a dispute between indigenous people and Arendelle’s soldiers within an enchanted forest. This first exposition dump to set up the plot is both overlong and tedious- the first sign that the movie might have bitten off more than it can chew. Flash forward to three years after the events of the first film and a mysterious voice from the forest is calling out to Elsa. The gang all set out to find the source and uncover its secrets, which might be linked to the source of Elsa’s ice powers and the truth about her and Anna’s parents. 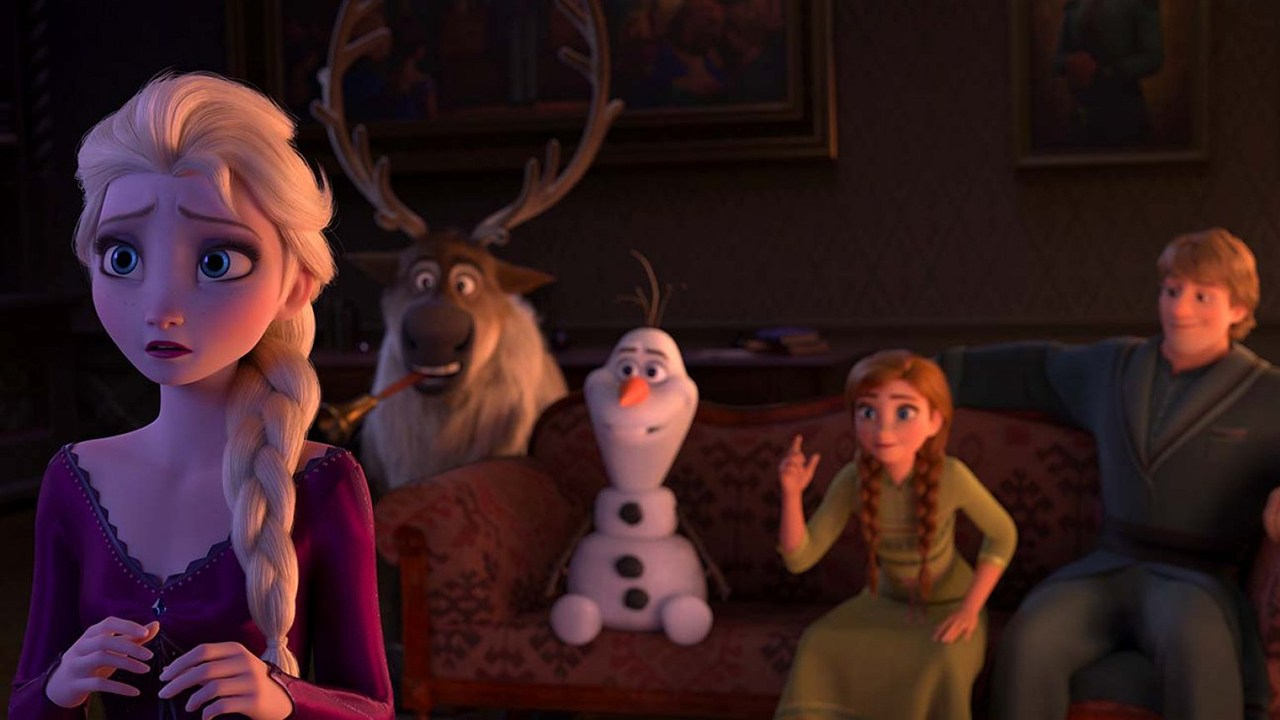 Frustratingly, the film continues to pile on new characters and story ideas. New conflicts between the main cast are created along the journey. The film’s length is simply not enough to sustain all of them in a satisfying way. There is not enough time given to fully commit to everything that is introduced, so by the time the credits roll it feels like several plot lines were just put aside more than they were resolved. Kristoff (Jonathan Groff) finally gets a song that is all his own ( the boy-band inspired power ballad “Lost in the Woods”). Regrettably, his side plot dealing with Anna is both unoriginal and ultimately feels unnecessary since it never leads to anything beyond what you would expect. If the film’s runtime could not be any longer, then it should have trimmed fat and focused on the more profound ideas within.

The relationship between the two sisters is the franchise’s strongest component. This dynamic is luckily still intact throughout Frozen II as it grows and gets challenged. It is impossible not to admire the film for its higher aspirations, deeper thematical approach, and world-building. Even when the execution is clunky, it is still mostly emotionally resonant. There is a ton of beauty to be found in this movie as it goes for something far beyond mere female empowerment – this is a downright spiritual awakening.

The film’s answers and resolutions may end up feeling too vague or abstract, but this bold and sensory approach to storytelling is something that I hope to see more of from Disney. While not perfect, Frozen II is still a unique adventure into the unknown. One that I find myself appreciating more as time passes by. Perhaps a later film can manage to stick the landing better?