Dolittle starts out well enough and may trick you into believing that you are about a watch a decent, if not somewhat bland, children’s adventure. After an animated introduction, we see the young Tommy Stubbins (Harry Collett), out hunting with family. Stubbins, as he is called throughout the film, is kind and does not wish to harm any animals. Though in a moment of panic he shoots a squirrel. This takes him to the home of Dr. Dolittle (Robert Downey Jr.), an eccentric physician who can talk to animals.

The tales of Doctor Dolittle have captured the imaginations of children since the 1920s, starting off as a series of books by Hugh Lofting. When Stubbins arrives at Dolittle’s massive estate, he is caught up in the wonder of it all. Butterflies scatter as he emerges from a tunnel into the wide fields of the yard. Giraffes, ostriches, and even a polar bear are out and about enjoying their day. The doctor’s house is littered with wacky and complicated inventions. For a brief moment, the film manages to sweep the audience up in the magic that the best children’s movies always seem to possess. But then we actually meet Dolittle. 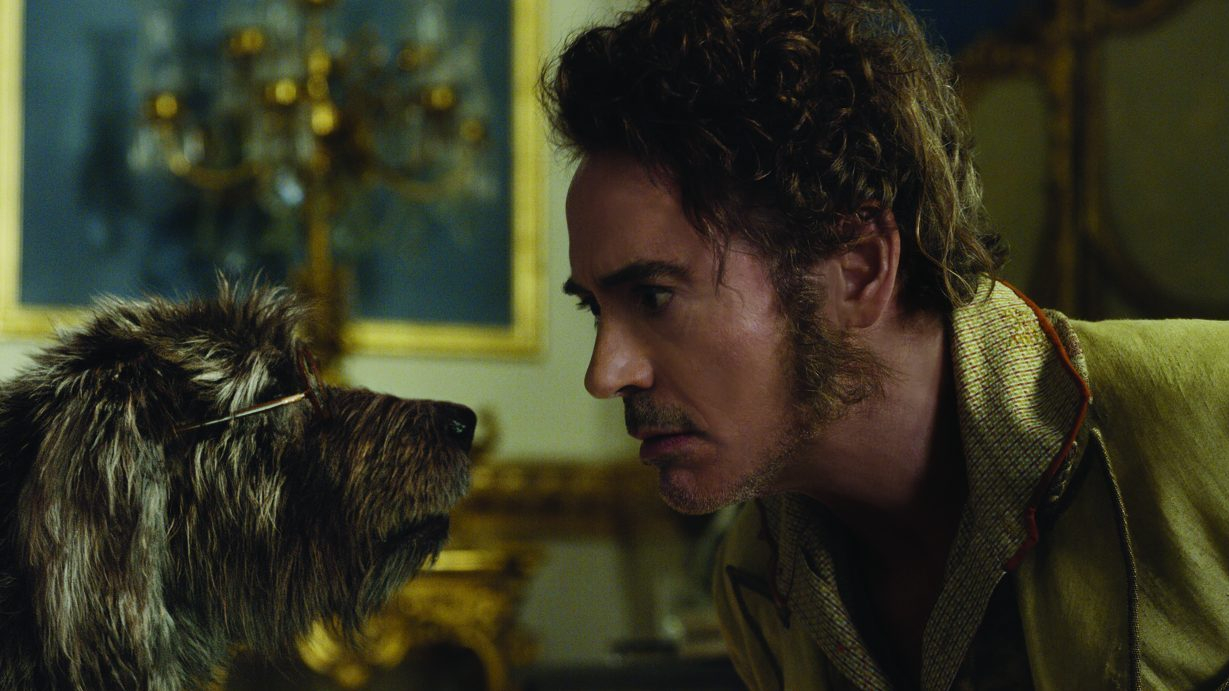 This is Robert Downey Jr.’s first role since 2014’s The Judge that is not Tony Stark. Fresh from last year’s Avengers: Endgame, his supposed final time playing that character, which garnered talk of an Academy nomination for Best Actor. Choosing Dolittle, of all things, to kick off the next stage of his career might seem like a strange choice to some. However, it appears that the film is attempting to replicate the success of Disney’s Pirates of the Caribbean. Downey is evocating Johnny Depp’s off-kilter and unpredictable portrayal of Captain Jack Sparrow. The results are embarrassing.

When we first see John Dolittle, he is being dressed by a group of birds, mice, and a duck named Dab-Dab (Octavia Spencer). He sits down to play chess with a cowardly gorilla named Chee-Chee (Rami Malek) with mice arranging themselves on the board to act as the figures. So far this is sincerely good. Then Dolittle opens his mouth and lets out a series of hoots and grunts. He quacks. He makes clicking noises with his tongue. His face contorts in ways that are usually only reserved for entertaining a baby. Right off the bat, it is unclear whether this is meant to be funny, charming, or possibly both? It is not either of those and things only get worse from there.

Much like his Sherlock Holmes, Downey’s Dolittle has become a recluse and does not enjoy the company of other people. He speaks in frenetic whispers and mutters, but unlike Holmes- Dolittle sounds like a Welsh man being strangled. Too many of his words are just plain unintelligible, anytime he raises his voice it sounds weak and hoarse. It does not help that the majority of his lines are delivered offscreen or are obvious ADR. Like his animal co-stars, Downey’s voice never seems to quite match the movements of his mouth. 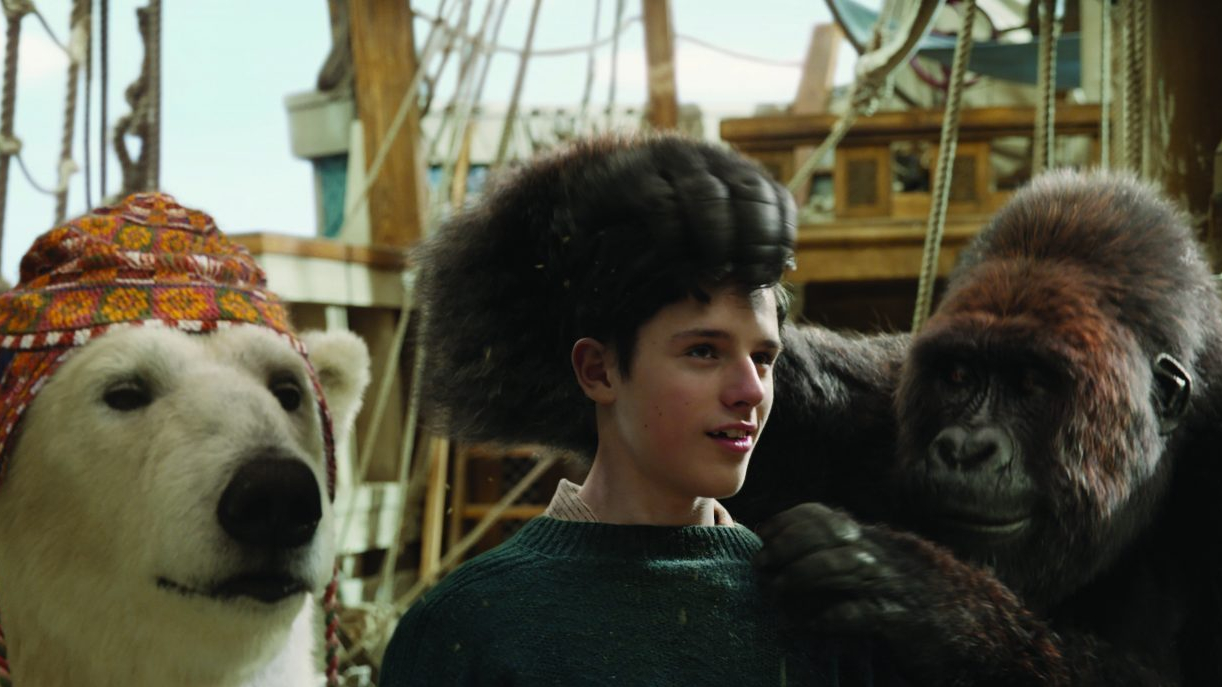 Yoshi the Polar Bear (voiced by John Cena), Harry Collett as Stubbins, and Chee-Chee the Gorilla (Voiced by Rami Malek) Courtesy of Universal

The culprit is likely the lengthy and expensive reshoots that plagued Dolittle’s production. After poor test screenings, a decision was made to extensively rework the entire film. It is obvious that this movie has had scenes rearranged to fit new story beats. Some have been edited to death and fly by before giving you a chance to process them. Others feel like they have just been entirely removed. Characters appear and then abruptly disappear, or reappear in places they were not at a second before.

When Dolittle and company set sail on a ship, they uncover a disheveled man underneath a tarp that exclaims, “Hi! I’m Jeff!”. The film then immediately cuts to the next scene, and Jeff is never seen again. After the first act, Stubbins (who joins Dolittle as an apprentice) loses all sense of agency and does not contribute much of anything for the remainder of the movie. He begins to understand the animals and learn how to speak their language, but this is both extremely silly, even in the context of the movie, and does not lead to anything in the story. The film’s third act is a complete mess- everything moves too fast and the abruptness with which it jumps around and races to the credits makes it seem like the editor just wanted it to be over with. 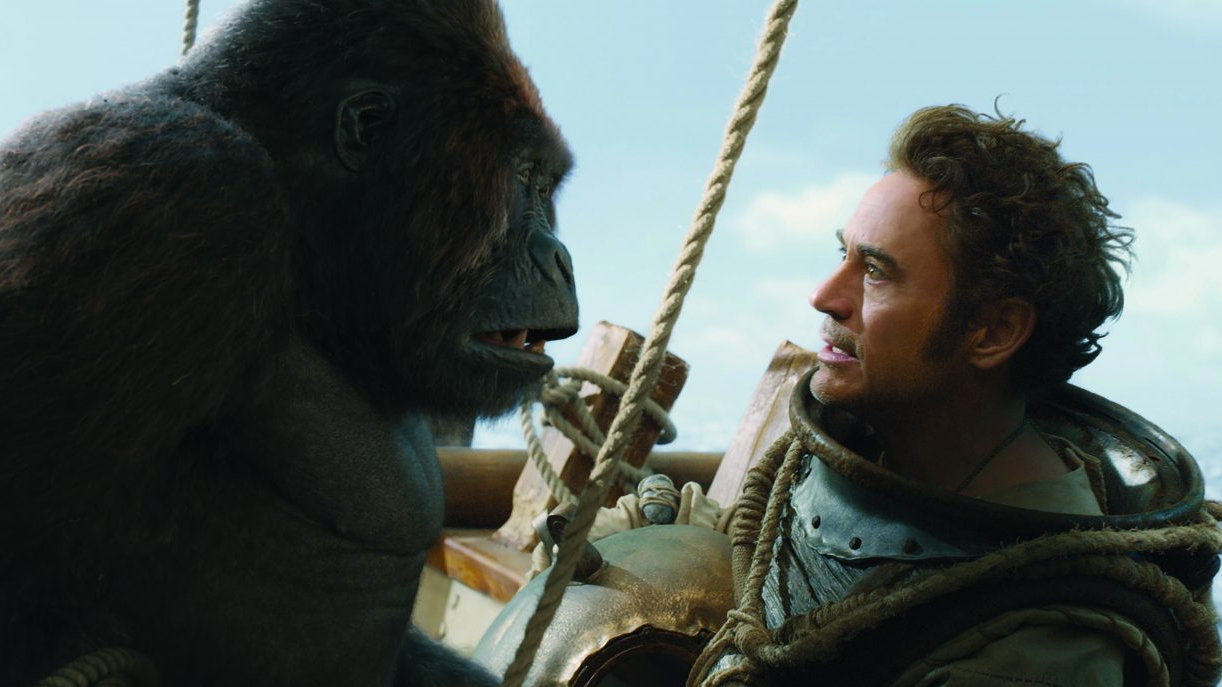 Chee-Chee the Gorilla and Downey Jr Courtesy of Universal

The animals, voiced by an exhausting revolving door of celebrities, are mainly there to utter one-liners that are relentless and amount to just being different ways of saying “That’s gotta hurt!’. Dolittle cannot seem to decide if it wants to be a wondrous adventure for all ages or a goofy comedy for small children. This gives the film extreme tonal confusion. Downey stares wistfully out at the ocean while aboard his ship in the middle of the night, thinking of his departed wife. Not long after, a Tiger named Barry gets kicked in the balls by Chee-Chee the gorilla and cries, “My Barry berries!”. A man is burned alive, and the film cuts to Dab-Dab the duck laying an egg. A squirrel’s life flashes before its eyes and images of war and nuclear holocaust play on the screen. A rabbit voiced by Will Arnett asks if Dolittle, “did a little doo-doo”.

The entire movie is incredibly uneven and discombobulated. Is it a complete disaster as many have been calling it? Not necessarily. The first two acts are still coherent enough and some creative choices, like Dolittle placing a harness on a whale to pull his ship, are genuinely fun and give off that magical sense that the film’s opening possesses. You question all of that when the climax involves Downey shoving a leek up a dragon’s ass to save the day, who then promptly farts in his face. Twice. When you learn that the film’s budget ballooned to over $175 million, the equivalent of an Avengers movie, you realize that a great number of people have made a very costly mistake.

Dolittle is in U.S theaters today and will release on February 7th in the UK!