Op-Ed: There Would Be No ‘Clone Wars’ Revival Without Kathleen Kennedy

Since Disney’s acquisition of Lucasfilm, the Star Wars franchise has been nothing short of controversial. Despite strong divisiveness within the never-ending abyss that is the fandom, Lucasfilm has mostly seen great success. It would be naive to say otherwise when box office records are being broken one after the other with the Star Wars media empire being more expansive than it ever has before. Star Wars: The Clone Wars’ Season 7 has just premiered on Disney Plus. What was once a fever dream will now manifest across millions of homes in its full glory. The sure to be hit will gather plenty of fan approval and praise from Lucasfilm creatives except for one- Kathleen Kennedy.

Kennedy’s name has been a recent controversial topic within itself. Despite huge financial success, many have found other reasons to believe that she has not been fulfilling her job as Lucasfilm president to the fullest. On the other side, many believe the company could not be in more safe hands. She is one of the major faces of Lucasfilm, so it is inevitable that her name come up in frequent conversation. However, as of recent, she has been subject to a toxic silent trend only women in positions of cultural influence face. They get blamed for all the negative and rarely, or never, get attributed to the positive.

The first live-action Star Wars program, The Mandalorian, launched to widespread success. Throughout the run of the first season, series creator Jon Favreau received immense praise and credit from viewers. He even got his own hashtag, #ThankYouJonFavreau, trending on social media thanks to fans. The sequel trilogy that just concluded with The Rise of Skywalker proved to be divisive on opposite sides of the spectrum and yet directors Rian Johnson and J.J Abrams have since received their own “Thank You” trends as well. One of the major heads behind Star Wars animation, Dave Filoni, received the #ThankYouDaveFiloni trend for his directorial work on The Mandalorian and his name will surely spike again this week with the highly anticipated premiere of The Clone Wars.

All of these creative voices absolutely deserve their due credit. Interestingly enough, Kennedy’s name never trends as high when there is massive fan approval on the internet. Her name is definitely at the top of charts when there is vocal disapproval though. It is true that creatives (more recently J.J Abrams with the backlash of TROS) also get strongly scrutinized by fandom, it just seems like Kennedy never gets the privilege of crossing to the positive side along with the artists she hired in the first place. This is not a call to start a Kennedy hashtag. Although, it is unjust that the vast majority of accomplishments within the recent Star Wars resurgence are credited to men when a woman is literally calling the shots.

In the case of The Clone Wars revival, there could be no one greater to thank than Kennedy. The show being the last Star Wars project George Lucas was heavily involved in grew a special place within the hearts of fans. The award-winning series was only licensed by Cartoon Network, owned by Time Warner, through its fifth year- thus receiving little to no hope for continuation after the Disney acquisition. The show was canceled in 2013 mid-production for season 6, with more than 60 episodes planned for two more seasons. This is a purgatory feared by all involved in television. Season 6 was cut nearly in half from 22 episodes to 13 and found a new home on Netflix in 2014. It would be the end of the program until a shocking revival announcement at San Deigo Comic-Con four years later.

This may be hard for some to read, but by all means, another season of The Clone Wars was not completely necessary. Season 6, subtitled as The Lost Missions, was already Lucasfilm’s shot at bringing closure to essential arcs before leading into Revenge of the Sith. For only 13 episodes, the season does a surprisingly good job of achieving just the right amount of closure. Are there plenty of threads left untied accompanied by the desire for more? Absolutely, however, the opportunity to even create and distribute any form of finale (post-cancellation no less) is a rare privilege that countless of axed television shows can only dream of.

Then comes “The Clone Wars Legacy”, a multimedia continuation project that only a company like Lucasfilm could see through. The project sought to fill in more gaps and give fans even more satisfying endings through avenues outside of television. The two most notable projects being the Darth Maul – Son of Dathomir miniseries originally published by Dark Horse Comics and the Dark Disciple novel published by Del Rey. Both focus on crucial antagonists in the show that never got a proper exit. On top of this, Lucasfilm debuted two arcs to the public in the form of story reels. One of them, titled The Bad Batch, even made the cut to be completed for season 7 on Disney Plus. Clone Wars creatives also periodically unveiled behind the scenes tidbits and answered as many fan questions possible in the following years.

“The Bad Batch” courtesy of Lucasfilm

In short, Clone Wars fans got fed what could possibly be the largest amount of post-cancellation closure for an animated show (maybe any show period). Lucasfilm literally did the most they could, but fans were restless. The #SaveTheCloneWars hashtag was created and never sunk too deep in trends- it even prompted an official social media group. Lucasfilm themselves changed the hashtag to #CloneWarsSaved upon the revival announcement and have used it in promotion ever since. This again is a huge blessing that countless people involved in television have dreamed of receiving.

In a recent interview with the Los Angeles Times, Kennedy was asked if Lucasfilm pays attention to its devoted fanbase. She responded with, “It does matter what they say and what they care about, all of those things play a role in our decision making”. She along with many others in power clearly took notice of the resilient revival campaign. This is a classic “giving the fans what they want” situation. Supervising director Dave Filoni obviously deserves just as much credit, but at the end of the day who has the final say when signing the checks?

Kennedy’s work ethic has somewhat grown a notorious public image. The fans know that if she does not like something, it will not see the light of day. In truth, her Lucasfilm track record is far from clean. From either firing directors pre or in the middle of production to more recently pushing back projects on the agenda; fans have had plenty of valid comments and concerns to vocalize. To say that the Academy Award-winning co-founder of the one and only Amblin Entertainment is unaware of the inner workings of the film industry is deeply hollow. Disagreeing with the decisions she has made, only those based in nondiscriminatory rhetoric, is completely fair on the other hand. 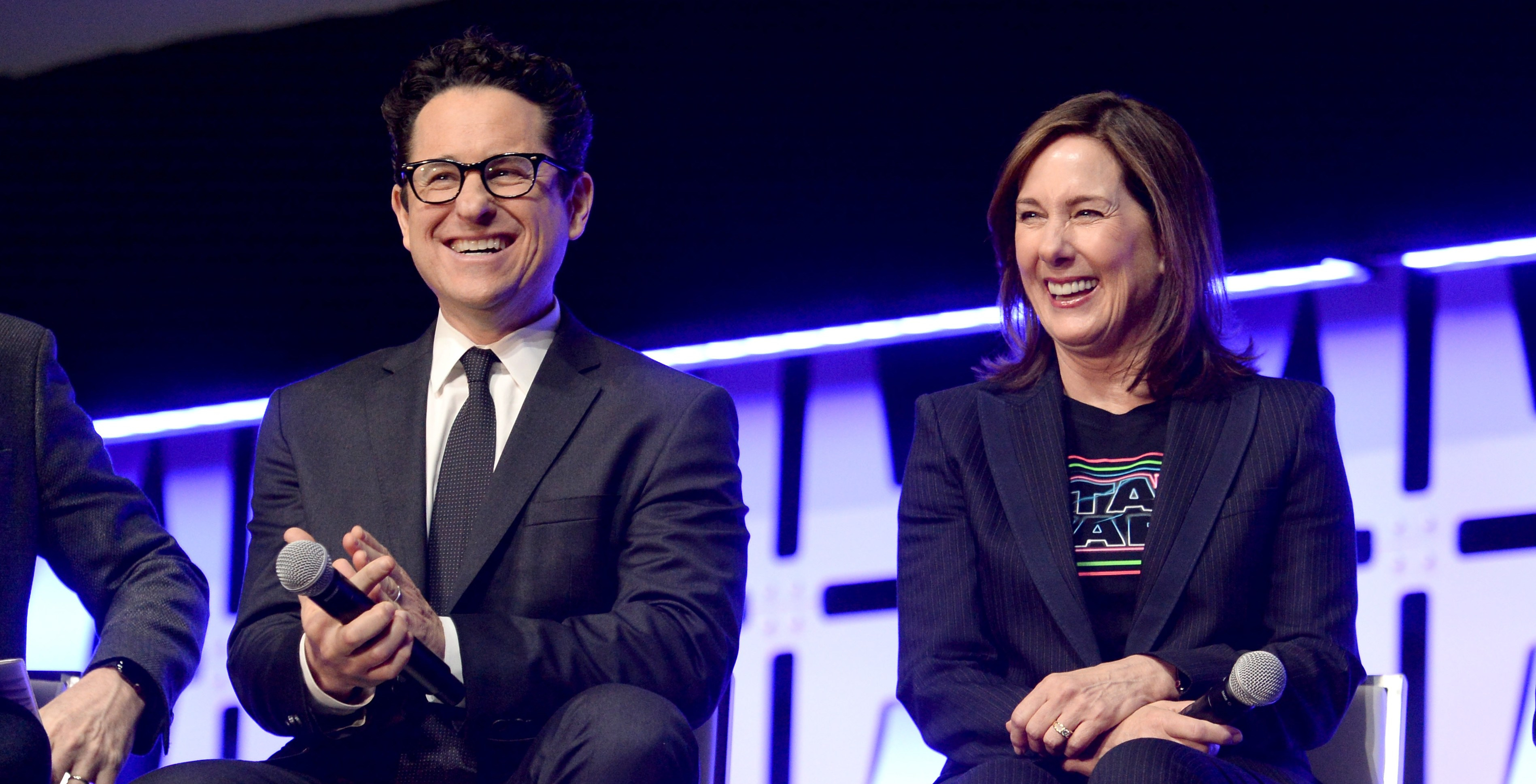 Just like any other executive with such power, she should always be up for scrutiny. Her long career and accomplishments do not absolve her of present-day decisions. Although, she tends to receive twice as much negative reception from the same actions her male colleagues fly by with. Kennedy replaces a director or pushes back a project and fandom paints a sinking ship portrait of her company. Marvel Studios president Kevin Feige does the same and gets away with the majority praise for his industry intellect. Granted, Feige has earned the title of being the maestro behind the Marvel Cinematic Universe- but he too just replaced a director with the Doctor Strange sequel and fans did not react by getting “Fire Feige” trending on the internet. The same cannot be said for Kennedy.

Kennedy has made some offbeat decisions. Fans should call out areas she needs to work on such as hiring more diverse talent. Perhaps white males get all the positive fan reception because, so far, those are the only people she has highlighted? Even so, Kennedy is only human and deserves nuance just like every single person within Lucasfilm. She is no different than any other executive in that they want the best for their company and for those who contribute as buyers. Regardless of one’s opinion on the quality of the content she has produced- it cannot be denied that, despite some bumps, Star Wars has possibly never been more unifying than now. Unfortunately, against her own will, her image has been intangled in the deeply rooted toxic traits of fandom. Something her male counterparts with similar, if not the same, portfolios are impervious of.

Remember this when enjoying new episodes of The Clone Wars. Make it the same for The Mandalorian and any new exciting project on the horizon. There necessarily did not need to be another season of The Clone Wars. Frankly, now that the Skywalker saga is over there does not need to be as much Star Wars content in general. However, fans are currently being blessed with a plethora of options. Opinions should be shared, valid criticisms should be vocalized, and praise should be given in all due directions- especially towards the woman who runs it all.

New episodes of Star Wars: The Clone Wars debut every Friday on Disney Plus!

No, she didn’t do anything to help out, fans have been asking for a season 7 since Disney canned the series when Rebels began. KK is still the WORST person to be apart of the Fandom