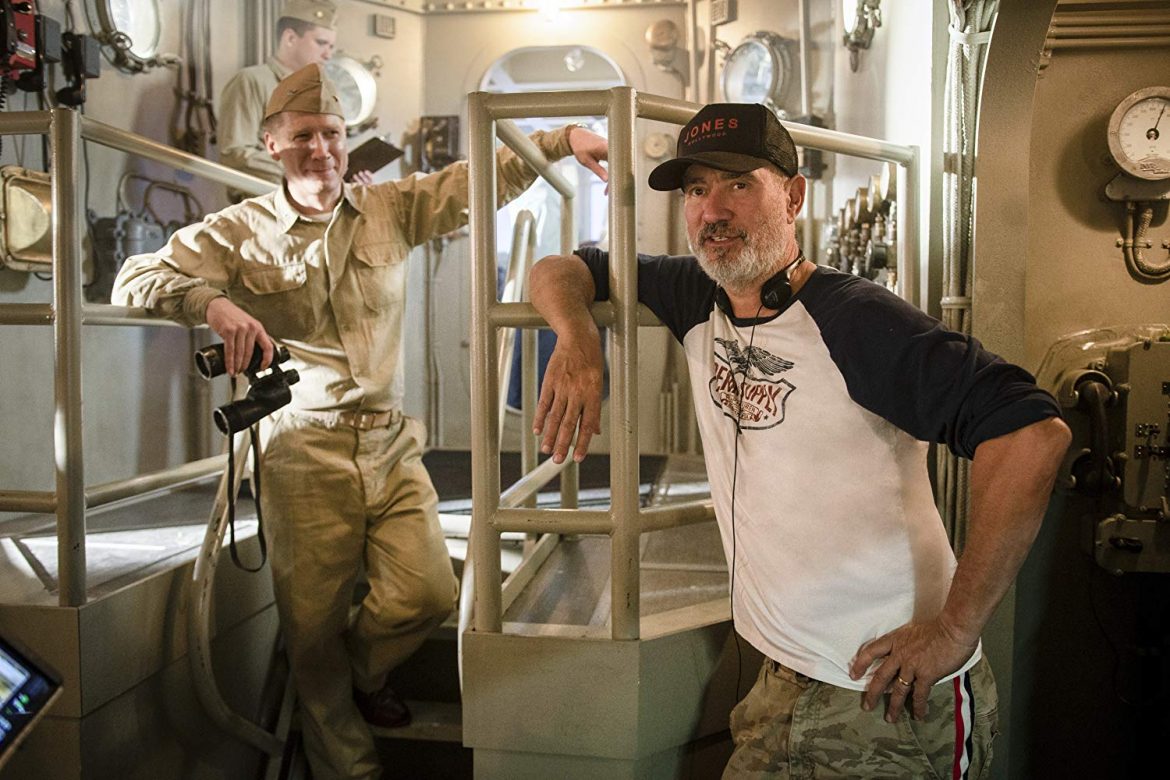 Roland Emmerich needs no introduction. The German maestro of chaos has already made a unique stamp in Hollywood with a career spanning over 30 years. No one else does disaster on an epic scale like Emmerich. Radical films such as Independence Day, 10,000 BC, and 2012 have turned heads in all directions. Regardless of what you think of his work, it’s hard to deny that there is anyone else making films like his. The same goes for his latest release, Midway.

For a career almost entirely focused on large scale disasters, Midway is one of his few films based on real legitimate events. Based on the World War ll battle of the same name between the U.S and Japanese forces, the film boasts a star-studded cast in true Emmerich fashion. Woody Harrelson, Mandy Moore, and Dennis Quaid are just the tip of the iceberg. Emmerich initially had trouble getting the film greenlit but through meticulous means and determination, Midway quickly became known as one of the most expensive independent films ever made.

We were lucky enough to have Emmerich for an exclusive interview. We go into the origins and production of Midway to his love of the war genre. The influences of his previous work in disaster films do not go untouched and he even gives us a tease of his next film scheduled to hit theaters next year! Read how it could possibly be one of his biggest projects yourself. 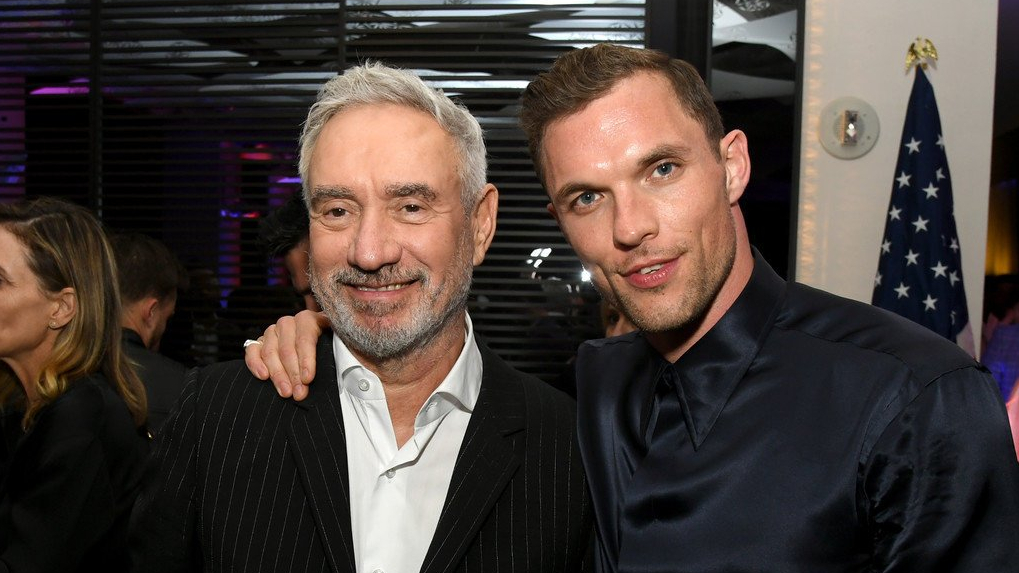 DF: For Midway, it’s quite well known that you raised the funding, over a hundred million, through independent sources. How did this affect the film’s production?

Emmerich: Well, it’s a way to make movies you know? What you do is more or less use the whole world. Go to every independent and big distribution company worldwide to raise the financing for your film. Luckily, if you could do that you need naturally a correct pitch with a certain quality. What is really important that you must have is American distribution. In this case, Lionsgate was very important. So, it’s a very complex and complicated way. But the really interesting part is that you become the studio. All of a sudden nobody tells you anything any more because you have to make all the decisions yourself.

That gives you a certain freedom. On the flip side actually, you have to kind of work faster- maybe more under pressure. I had to shoot this movie in 65 days, which was like, wow, okay! But I managed it. Also, the crew was aware of that. So everybody worked extra hard on this film and is very proud of the result. I actually liked it so much that I financed my next movie the same way! I asked Universal (who previously acquired it in 2016) to give back my project and they were very gracious. We sold it in Cannes, got like the whole world on board and Lionsgate is back in business with us. And it’s even bigger than the last one!

Emmerich: I actually quite enjoy it, I have to say.

DF: With Midway, it was a very long journey to finally get it to the screen. You’ve been really passionate about trying to bring this story to life. Could you talk about the journey this film has gone on to be produced?

Emmerich: Well, it’s been a 20-year journey. I had this project 20 years ago, proposed it to Sony. They were over the moon about it, but then the studio heads weren’t going to allow the production of a movie costing over a hundred million dollars. They did not want to make a film that expensive, which more or less is one of their biggest defeats. So instead of that at that time, I did The Patriot- but I never lost interest in the project because I was really taken by how complex the many different factors of this battle were. Also over the years, I read every book about it and more and more elements came together.

Then like maybe five years ago, I had met a young writer called Wes Tooke. Every young writer coming into my office, I have always asked, “What is the movie you really want to write?”. He said to me, without thinking or hesitating, Midway. I said, “Oh, that’s interesting”. We started talking and decided to develop a script together. Then after like three years or so, I was ready to go into production and then we did it. 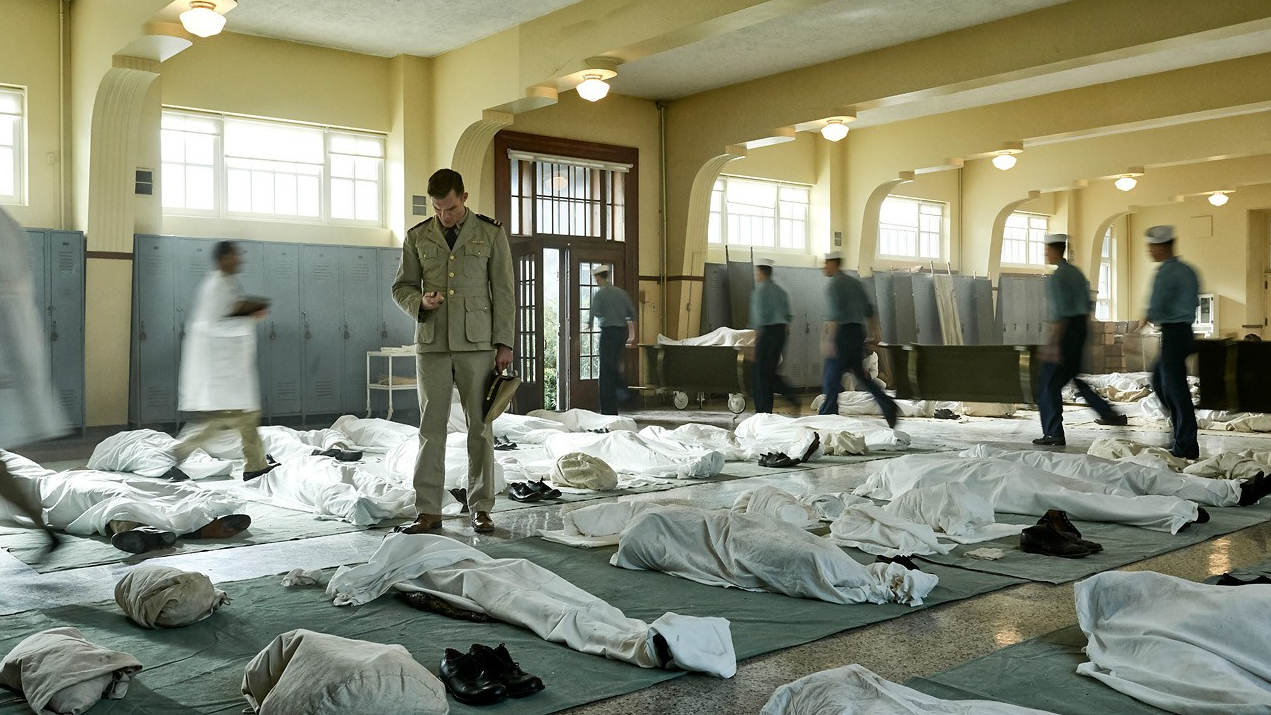 DF: Why specifically the battle of Midway? What about it did you think was important to be brought to life in the film?

Emmerich: First of all, I’m always looking at the elements of a historical film. This is a classic underdog success story. The Americans being the underdogs because they kind of just joined the war. They joined because of a surprise attack. There was a feeling of revenge in all of them. They asked how could anybody do this? How could anyone kill their friends? There were a lot of very important personal decisions being made- both on the Japanese and American sides. It’s sometimes amazing how small decisions by one man can actually steer a battle in a different direction.

For example, without the code breakers, the Americans wouldn’t have had a chance to win this battle because they knew what the Japanese were doing this time. Then overall it’s about young men fighting for democracy and freedom against a more fascist oriented foe. You know in our times it’s actually amazing. Whether you live in America under Trump. I come mostly from Germany where right-wing parties are also on the rise. It’s good to remind people that 75 years ago, that worked out not so well for the world.

DF: Yeah, absolutely. What do you feel the relevance of the battle of Midway has within current world affairs? Is that sort of what your response would be?

Emmerich: Yeah, we talked about it a lot while writing the script. I said that we have to look at the world around us, people have to be reminded of this. Not every war movie does this by the way. Dunkirk was about a retreat- there’s hardly any Germans in there. Even 1917, which is a movie I love, is only about the atrocities of war. It’s not about what the war was about. It was a personal story of two brothers and friendship, but in times of battle. But I had a feeling that it was about time for somebody to make a movie more about freedom. That’s why I wanted to also include Pearl Harbor, it was the kickstart of all these events. I was amazed at how after the big surprise attack of Pearl Harbor, six months later the most decisive battle of the Pacific war was already won by the Americans. It was one of the biggest turnarounds in World War II. 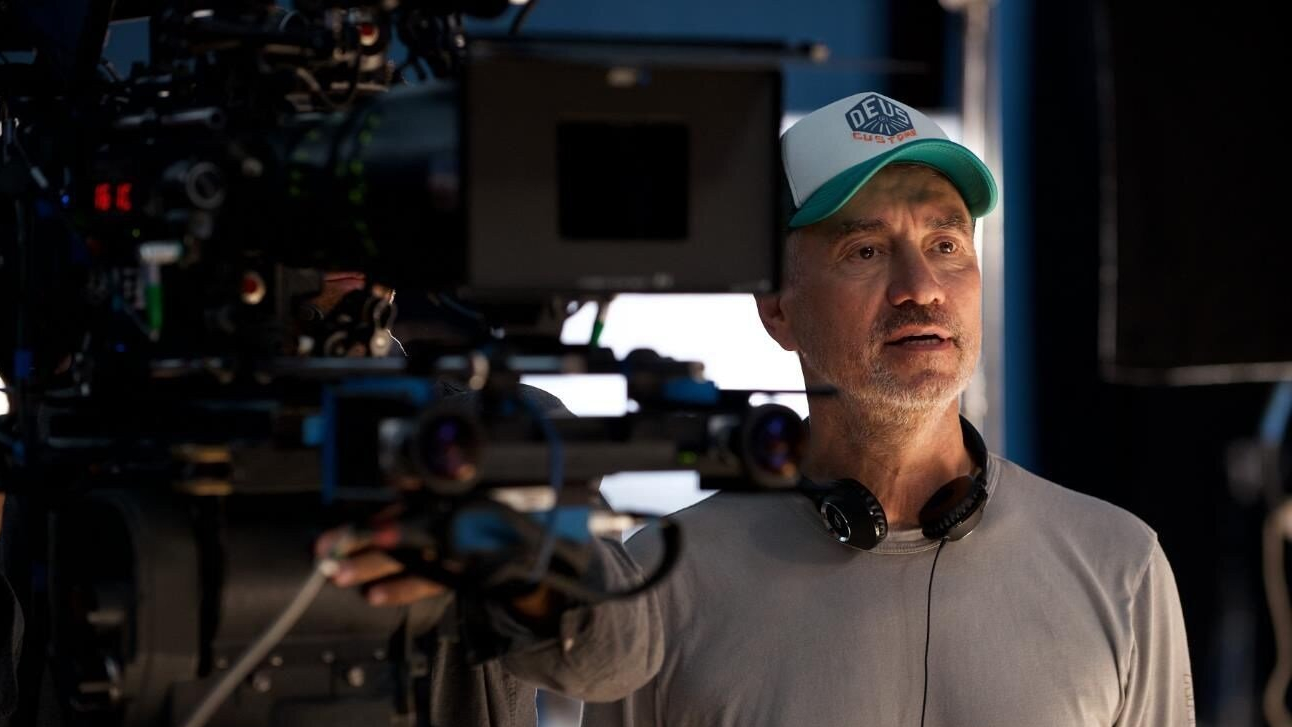 DF: You are very well known for creating incredible disaster films. We have all seen Independence Day, The Day After Tomorrow, and 2012. Did you see any real parallels between that sort of genre and the genre of war films that Midway fits in?

Emmerich: When you look at all my films, I would say 80 or 90 percent of the time it’s one big event. Very normal, regular people have to deal with that event. You know maybe it’s an alien invasion? Maybe it’s a climate change? Maybe a worldwide flood? I think war movies are the same. There are a lot of characters- all people from normal walks of life that have to fly and gather to overcome whatever they have to overcome. I was always drawn to war movies because of that, especially those of the 60s and 70s because it was always like these enormously big operations. I’m very into the intricacies of how these events all happened.

DF: Would there be any specific movies that you feel influenced Midway? Would it be those movies of the 60s and 70s?

Emmerich: There is one movie I really love, A Bridge Too Far (1977). When you look at that film, it has a very similar structure. It also shows the Germans very well and their problems. It has a lot of characters and it’s one big operation. You see not only the operation itself but also the planning of it and what lead to it. At the very beginning when I had this project and proposed it to Sony, they asked me who I wanted to write it. I said, William Goldman (writer of A Bridge Too Far). John Calley, who was running the studio at that time, picked up the phone in front of me and called William Goldman and said, “I’ve got a young director here, he wants to talk to you”. Then all of a sudden three days later, I’m sitting in his office and convinced him to write Midway for me. When I got the call from John Calley that Sony wasn’t going to move forward, I was understanding. A Bridge Too Far is probably my favorite war movie. I loved it as a kid and still love it today. 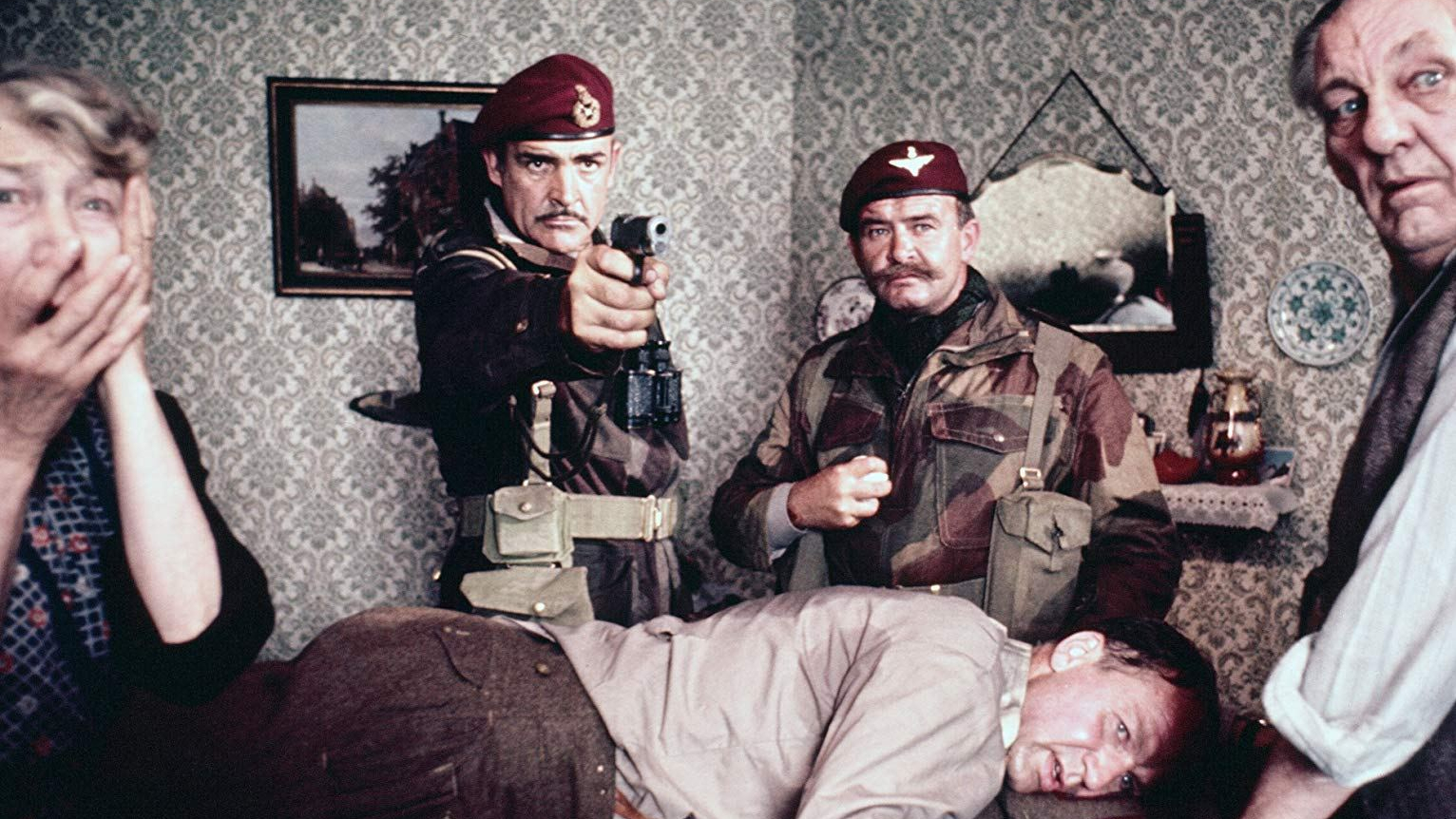 DF: You’ve mentioned that your next film is independently funded. Could you tell us about what is potentially coming next for you and why we should see Midway?

Emmerich: Midway, I think, is a very entertaining movie besides other things. More so, I think its fun to watch. My next movie is called Moonfall and it’s a more traditional Roland Emmerich film. It’s about the moon falling to earth, but the moon is not what we think it is. It has a philosophical aspect of where we come from- why we are here? why is life existing on Earth? All kinds of these bigger questions!

Midway is out now on Digital Download and on 4K Ultra HD, Blu-ray, and DVD March 9th!

Emmerich’s next film, Moonfall, was the biggest presale on the 2019 Cannes market with a budget of 150 million. Lionsgate will distribute in North America with a 2021 release.

Wes Ball on ‘The Maze Runner’ Trilogy and...

Wes Ball Gives An Update on His Upcoming...