‘Doom Patrol’ Season 2 First Impressions – Weirder and Greater than Ever 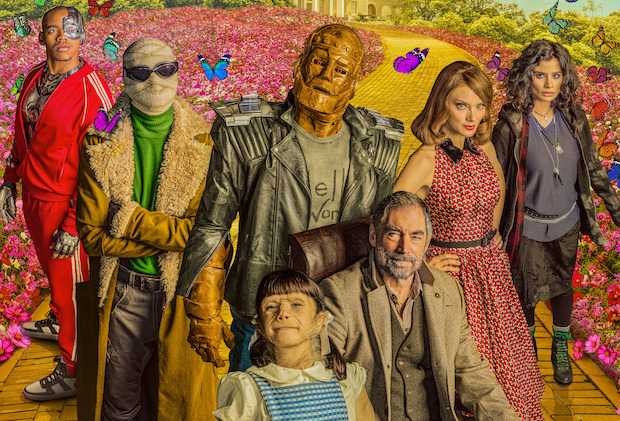 Last February, Doom Patrol’s first season premiered on DC Universe to acclaim from fans and critics alike. Now over a year later, the second season of the superhero series has arrived – continuing the strange adventures of the beloved team. With heavy pressure on the season due to the great performance of the first, this continuation has a lot to live up to. Luckily, Doom Patrol season 2 honors season one perfectly.

The sophomore season opens up mere weeks following the end of the first, with the majority of the Doom Patrol shrunk to a miniature size and forced to live in a model town as Larry Trainor (Matt Bomer), the only member still at normal size, works to reverse the experiment. The team tries adjusting to life after defeating Mr. Nobody, as they are joined by a new member: Niles Caulder’s (Timothy Dalton) young daughter, Dorothy Spinner (Abigail Shapiro). As the Doom Patrol continue to struggle with their own inner issues, such as their pasts, powers, and mental states – they find themselves wrapped up in a new adventure that will send them on an even crazier journey than last time. The truth behind Dorothy and her mysterious powers turns out to be more pivotal than anyone imagined.

If you found yourself enraptured with the chaos and wacky nature of Doom Patrol’s first season, you will absolutely enjoy this just as much. The second season of the series continues the story in a great way. In the first three episodes, all of the show’s main characters are progressed in a meaningful way, allowing for natural development that doesn’t feel rushed. This can be attributed to the stellar writing of the series. Never does it feel like the writers are being lazy, or that the characters are not truly acting like themselves. Everything is tightly paced in this second season so far, and it will leave fans thoroughly pleased.

Once again, the cast is an absolute delight. The standouts are, without a doubt, Brendan Fraser and Diane Guerrero as Cliff Steele/Robotman and Crazy Jane, respectively. The two characters continue to serve as the focus of the series, and the actors do an amazing job handling the heavy work. The othes give stellar performances as well, with Matt Bomer playing Larry’s dive into his past incredibly well. The physical work of Matthew Zuk must be attributed for he adds extra, yet crucial depth under all the bandages. April Bowlby’s Rita Farr also follows a satisfying path as she works to accept herself and her powers, using them for the greater good.

Joivan Wade’s Victor Stone and Timothy Dalton’s Niles Caulder are both, once again, great additions. Victor is given a layered arc detailing his PTSD. Dalton continues to deliver with his portrayal of the overprotective father. Praise must also be given to the latest addition to the series, Dorothy Spinner played amazingly by Abigail Shapiro. Shapiro manages to convey the little girl’s emotions in a way that allows you to become fully invested in her story. She is far from a nuisance, which is a problem seen all too often by younger characters.

Technically speaking, the show continues to succeed in many aspects. The visual effects for the series are exceptional, never looking too cheap or unbelievable. The costume design continues to impress, with Robotman’s suit and attire being especially admirable once again. The set design in particular is quite great, as all the locations in the first three episodes have their own identity and personality, rather than just feeling identical to one another. The miniature town inhabited by the shrunk team is a standout. The town balances a man made, kids toy look, while also not being too distracting with some of the materials.

Doom Patrol’s second season kicks off as a great continuation of the first, honoring what came before while progressing as best as it can. The opening three episodes are paced well, working to slowly advance the main plot without giving away too much about the next six episodes. Individual character arcs are developed graciously, helped by the strong performances of the cast. All in all, the show continues its track record as being one of the undeniable stars of DCTV. Established fans surely won’t be disappointed by this new installment in the Doom Patrol saga.

The first three episodes of Doom Patrol Season 2 are available to stream on DC Universe and HBO Max, with new episodes coming every Thursday.