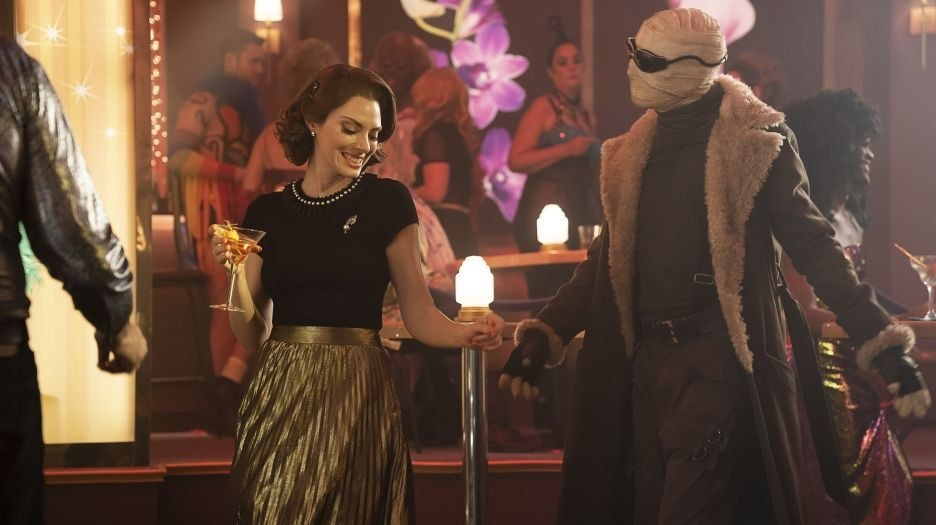 Following the stellar 3-episode premiere for the second season of DC’s Doom Patrol, fans were left eagerly waiting for more. Especially following the end of the third episode, which saw Dorothy (Abigail Shapiro) break Danny the Brick, leaving them even worse off than before. What follows next goes down as one of the strangest, but absolutely entertaining tales Doom Patrol has told yet, in the fourth episode of season 2 titled “Sex Patrol”.

Following a brief flashback showing Dorothy living with Danny the Street, the episode dives straight into its main plot, which sees Dorothy contemplating what to do after breaking Danny. This leads to Niles (Timothy Dalton) inviting the Dannyzens, including Flex Mentallo (Chandler Long) and Maura Lee Karupt (Alan Mingo Jr.), to their home to heal Danny. The Dannyzens decide that the best course of action is to throw a party, hoping to bring back the joy and love that filled Danny’s heart. And so, the party begins.

As the party gets underway, Jane (Diane Guerrero) gets locked from the real world, for some of her other personalities take control. With Dorothy using a musical number to invigorate the party, Rita (April Bowlby) has her own task. Using Flex’s powers, Rita works to clear a mind with an orgasm that eventually unlocks an unfortunate memory. Shes revists her mother being forced to sleep with a producer in order to get her a role as a child. The energy of the orgasm proves to be too great, summoning an ancient sex demon (yes, you read that right).

As Dorothy’s powerful friend the Candlemaker (Lex Lang) tries and fails to convince her to destroy Danny, a group known as the SeX-Men arrive. They work to stop the Shadowy Mr. Evans, the sex demon in question. While the energy works to create a baby, Jane manages to stop the demon, with everything returning to normal. Danny takes a new form as a tire, allowing the Dannyzens to live together once again.

“Sex Patrol” proves to be an absolutely insane episode, with sex demons, a group designed to monitor sexual activity across the planet, Robotman taking ecstasy, and a performance of “Pure Imagination” from Willy Wonka and the Chocolate Factory. The episode is pure delight, providing nice emotional moments while also being hilarious. Danny the Street and the world surrounding them was one of the highlights of the first season, so seeing it again was wonderful. The return of Flex Mentallo and Maura Lee Karupt, two characters who lit up the screen last season, is a great highlight. The two characters both serve a purpose in the episode, guiding members of the Doom Patrol down certain tricky paths.

The star of this episode is undoubtedly Abigail Shapiro as Dorothy Spinner. Her character is given the focus of “Sex Patrol”, and Shapiro does an amazing job of conveying the struggles against the Candlemaker. Shapiro’s portrayal goes a long way to make a character that could have easily been a nuisance into a lovable child that viewers connect with. Bowlby, Guerrero, and Joivan Wade are all great in the episode as well. Rita’s journey in fully controlling her powers is easily one of the best threads this season has to offer. Victor’s struggle to ignore his new friend’s past and Jane’s personalities working to live in the main world are also riveting. Dalton deserves recognition, for he goes even deeper into the role of an overprotective father. In trying to protect his daughter, he is only hurting her worse.

The music in the episode is great, and the show’s rendition of “Pure Imagination” is an honorable cover of the beloved song that plays a purpose without feeling out of place or annoying. The visual effects in “Sex Patrol” are top-notch, as with the rest of the series, especially for the scenes featuring the Shadowy Mr. Evans. The set design is quite notable, returning to the whimsical nature of Danny that we got to see in the first season.

Despite doing little for the progression of the season’s main plot, “Sex Patrol” is a great episode of Doom Patrol. Fans return to a beloved part of last season, with guest stars reprising their roles and adding to the absolute wonder. The second season of Doom Patrol continues to improve from its first in many ways. Hopefully, this will continue as we move on.

Catch new episodes of Doom Patrol every Thursday only on DC Universe and HBO Max.