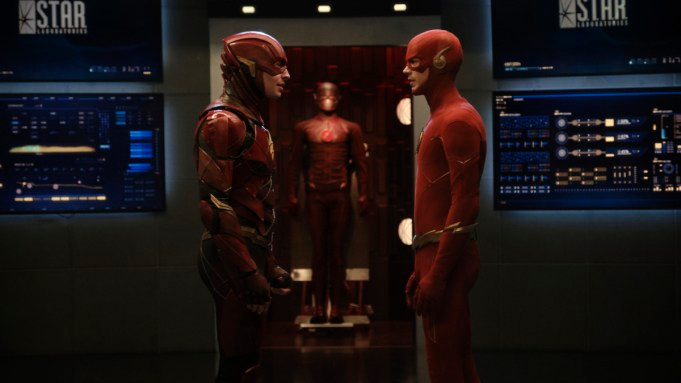 Before joining The Flash on The CW as a producer, Eric Wallace previously wrote for DC Comics on titles such as Mister Terrific and Titans. He would go on to write several episodes across seasons 4 and 5 of The Flash before rising to the top as showrunner for season 6. His work added a boost of tasteful energy that was well-received by the show’s dedicated fans. Due to the ongoing pandemic, season 6 didn’t get a chance to complete production and had to finish at 19 episodes instead of the 22 The CW had ordered.

Despite this unfortunate situation, The Flash was still lucky enough to shake fandom everywhere during the Crisis on Infinite Earths multi-crossover in January. During the event’s takeover on Arrow, Grant Gustin’s Flash came face to face with Ezra Miller’s iteration seen in the current DC film universe. Dreams became reality and the television shows proved that anything can (and will) happen. The glorious moment has now opened the door to endless possibilities, as the DC worlds seen on both TV and film continue to expand into the unknown.

Luckily for the fans, we were able to shed more light on these chances with Eric Wallace himself. In part 1 of our exclusive interview, Wallace takes us through that fateful Ezra Miller cameo, his thoughts on Warner Bros. upcoming Flash film, and which DC film heroes he wants to cross over with next. Who knows, maybe the two Flashes will meet again one day? See what Wallace has to say!

So The Flash film is currently set to release in 2022. Of course, we had that connection between itself and the TV Series in Crisis on Infinite Earths. Are you looking forward to the film and do you think we could potentially see the two Flashes meet again, next time potentially on the big screen?

EW: Well, I’m glad you asked this. I am so excited about The Flash movie. I literally will be the first person in line to go see it. I love all things of The Flash, all different iterations of The Flash. Obviously in my heart of hearts, Grant is my favorite Flash because that’s my show, you know? But it was such an honor and a privilege to have Ezra come play in our Arrowverse, even though it was only that one scene and Grant and Ezra got along so well. There was definitely a comradery there and a mutual respect for each other as performers because they’re very, very different, right? They’re very different people. But they are both so, so gifted and talented. So yes, I can’t wait to see this movie.

I would love to see Grant appear somewhere in their version of the film. Say I said, “You know what? I’ll give you a couple of weeks off easy now.” I don’t know if they’ll do that, but I’m putting it out there. Because I know Grant would be excited. I think he would have some fun. I also told Ezra, with open arms, we would welcome him back. I would love to have him back for longer, for a full episode of The Flash, if we can somehow make it happen. Schedules are so tough. He’s a very busy man. He has not just The Flash franchise, but other franchises too. So I don’t know how possible it is, but I do know it’s not impossible because we proved it in Crisis when we saw the two Flashes together. So I’m going to be hopeful and I’m going to put that energy out there. Hopefully someday sooner, rather than later, we will see those two Flashes of Ezra and Grant together and for anybody reading this article, I am happy to help accommodate in any way possible.

But so far, there have been no discussions about that?

With regards to that, how did Ezra Miller’s appearance actually come to fruition? Did you call someone or did they call you?

EW: Well, sometimes you put a crazy dream out there and you get lucky, and I have to thank Marc Guggenheim for this. When we were sitting down breaking the Crisis on Infinite Earths crossover, all the showrunners are in the room together with a few writers who were assigned with us to write those episodes. It’s kind of a super writer’s room as it was myself, Marc Guggenheim, Keto Shimizu over from Legends of Tomorrow, Caroline Dries over from Batwoman, Robert Rovner from Supergirl, Charles Holland from Black Lightning. So it was pretty fun, right?

We all got to that moment very early in the process where Marc encouraged stuff to say, “Hey, if you could see anybody you want to see in these crossovers as a cameo or maybe as a supporting role, or even as a larger role, who would it be?” And everybody, it was like kids in a candy store. We all started throwing out crazy ideas. I wanted to see Kevin Conroy because he was my voice of Batman and I love him so much. I threw that out and Keto from Legends went, “I second that!” She was very excited because she’s a huge Batman fan. So all these names are being thrown out from other people from the Batman universe to people from the Shazam TV show from the 70’s, which some of us had been familiar with as kids. You know, the Shazam and Isis Power Hour? We’re that nerdy. We talked about how we could get actual Super Friends, the voices from the Super Friends cartoon. Everything was on the table. How could we get people from the Zack Snyder movies to kind of crossover and that was just a mad dream.

I think it stuck because Marc really was the person who said, “Man, if we could get Ezra, because they’re going to shoot soon, this last movie, it would be the greatest thing ever”. It would show how really open the DC world is. And we would join TV to the Film world. But of course, how do you write the scripts? We didn’t have a place for the characters. It looked like it wasn’t going to happen. So everybody basically kind of forgot about it. Marc Guggenheim would know the details, but I do remember getting the call very late in. We might have even been filming at that point on episodes 1 and 2 of the Crisis crossover. I remember getting the call, “Hey, we’re going to go for it. We’re going to try and reach out to Ezra and his reps, just to see, because it would just be the greatest thing ever if we could pull this off.”

A lot of phone calls were made. I told Marc point blank, “Whatever you need me to do as the showrunner of The Flash, I will do to accommodate this. You know if you need funds, I will take them out of my show budget and I will put them towards this because that’s how much I want to help to make this happen.” And Marc said, “Okay, I’m going to take your word on that. And you may get another call in a week out.” I forgot about it. I didn’t think about it. And a week later I got a call and Marc said, “Okay, don’t tell anybody, but you know how you made that promise. We’re looking for a way to make this happen financially. Can you find us…” and I said yes. I said immediately, “Yes. Just stop talking, make those calls. I will find it in my budget. The Flash hereby commits to bringing the other Flash from the DC Extended Universe into our world and we will do it with open arms.”

Then 72 hours later, it was a done deal. Suddenly a week after that, I was on a plane to Vancouver and suddenly, I was producing that scene on set and it was the wildest thing ever. Ezra was so delightful. It was such a delight to bring him into our family. Everybody welcomed him with open arms. He was so terrific to work with. Seeing him and Grant for the first time, both in their separate Flash costumes. I wish everybody could see the first take, which I saw because I was there obviously. It was electric. It was immediately obvious to everybody. It was a very small crew. It was a very closed set because we had to keep a secret as best as we could, which thank goodness we were able to. We knew from take one, which was very much full of improv and they were moving around the script, but it was so like “what’s going to happen now?” It was so unpredictable and wild that all we could do after that first take was not to burst into spontaneous applause because we had just seen something special.

It said to us, “Huh, if we could get The Flash from the DC Extended Universe into the Arrowverse, this can open the door for other characters.” So I don’t know what’s going to happen in 2021 and 2022, things have obviously slowed down because of COVID and because of production winding down. But I would certainly love to see the Arrowverse have the Amazons and the Wonder Woman universe come to us, or Aquaman and his universe. I would love to see Cyborg. All of these things are welcomed now because of this one event, this one crazy idea that again, I’m not sure who had it, but Marc Guggenheim made that call and when he called me and said, “How can we pull this off? I need your help” I immediately said yes. And then the rest of the incredible Flash crew because we had to film it. Even though it was appearing in Arrow, Ezra and the DC rep who was with him came to our Flash sets. It was actually filmed by our crew on our sets. And it was one of our directors in house that had to do that scene.

That actually leads perfectly into our next question. Stargirl is the latest addition to The CW’s DC universe and will be exclusively on The CW come season 2. You mentioned there about wanting to get the Amazons, Aquaman, or Cyborg into the Arrowverse. Would you like to see a crossover between The Flash and Stargirl?

EW: Yes, of course. It’s funny. I’ve actually met Brec Bassinger [Stargirl herself]. She’s a delightful young woman. We’re both Dallas Cowboys fans. We love American football. I said to her, “Well, if you’re a Dallas Cowboys fan, you’re welcome on my show at any point.” I wouldn’t be surprised at all to see those worlds cross at some point. The problem is, of course, what universe is she in and what universe are we in? We kind of have to figure that out storywise.

The Flash is expected to return to The CW early next year. Warner Bros’ Flash film is currently slated for a 2022 release!