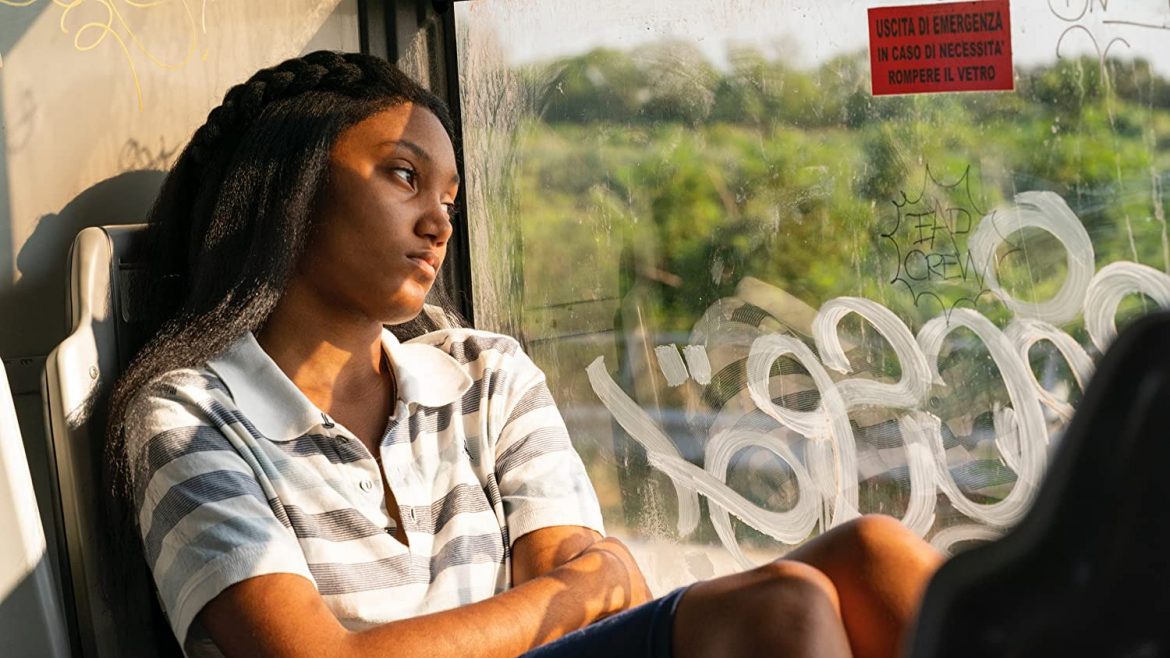 At only 17 years of age, Jordan Kristine Seamón has just made her screen debut in HBO’s We Are Who We Are, under the direction of Luca Guadagnino no less. Seamón stars as Caitlyn, a bold teenager living with her family on an American military base in Italy. Upon meeting Fraser (Jack Dylan Grazer), an outgoing teen who just moved in from the states, the two seemingly lost souls embark on a journey of self discovery.

Despite being so young, Seamón has made a name for herself as a Philly raised artist. Acting on stage and recording original music were already in her forte prior to landing the role in HBO’s latest. Though for an actor fresh to this side of the industry, she handles her screen presence with such passion and grace. We Are Who We Are is only the next step in the remarkable career that surely lies ahead.

It was a complete pleasure to sit down and chat with Jordan Kristine Seamón, as we did with her co-star Jack Dylan Grazer! We discuss what it means to be a newcomer in today’s industry and her unique collaboration process with director Luca Guadagnino. It turns out that Guadagnino’s uncommon style gave this actor what she needed and more in crafting a one of a kind screen debut.

To start off, how did you get involved with the show?

JKS: I auditioned, I want to say almost a year ago now. My mom found the audition online and I did a few self-tapes in the bathroom, they liked them and asked for a couple more. I did some more in my studio and then in downtown Atlanta, did another self-tape there and then I had a final meeting with Luca [Guadagnino] and Jack [Dylan Grazer]. I also got the chance to meet Spence [Moore II]. Around a week later, I got a call from my lawyer saying “Hey, you got the role!”

This is your first major role. What was it like walking onto set for that first day?

JKS: It was definitely very weird and strange. I had done only plays and musical theater before, so this was my first big on-screen role. It was very strange because I wasn’t used to the attention. There’s a lot of people when you walk onto set, especially if you’re in a main character situation like I was. There’s a lot of people paying attention to you, even at times when you don’t think people are paying attention to you. And I’m an only child, so attention is not something I generally seek out. I got a lot of it on the first day and I was very taken aback with people offering to hold umbrellas for me and a lot of other stuff. But it was a great experience, I was lucky enough to have a lot of my co-stars who were very sweet. They really helped me find my way through being more comfortable with just the idea of being on set and everything.

What was the collaboration process like with Luca Guadagnino?

JKS: It was amazing that one of my first directors film-wise is Luca and I think he’s a great first person to work with. He’s very flexible. I say this in every single interview, but it’s like one of my favorite things about him, how flexible he was in allowing me to try different things with the character and how nice he was in asking me for my opinion. I know sometimes you get on set – and I’ve experienced this in plays, short films and whatnot – you meet a director and they’re very straightforward, they tell you exactly what they want and usually don’t really want to change anything. But Luca was always interested in what myself and the rest of the cast were interested in, and sometimes I would ask him specifically what he wanted and he would tell me to try new things, which was great. It really helped bring authenticity to the show, because it’s not written by kids, but you have me, an adolescent, trying to bring myself into the scene, which makes it feel more realistic – not like an adult is putting their view onto the scene.

This series has an outstanding cast. You mentioned Jack Dylan Grazer briefly and there’s also Scott Mescudi who many know as Kid Cudi. What was it like to work alongside them?

JKS: Oh gosh, it was a very fun experience. Probably the most amount of fun I’ve had in a really long time. Jack is a huge ball of energy. There was never a day on set where he wasn’t just in the happiest of moods and it’s really cool to have that kind of person always around. I had plenty of days where I just wasn’t feeling great, wasn’t feeling super up to it and was really tired or whatever, but being around Jack, you can’t help but smile and laugh, sometimes it’s ridiculous. Scott (Kid Cudi) is amazing and a great guy. I still talk to him a lot actually to this day, he’s super-duper sweet and he’s been a really good mentor for me. Not only in acting, but also on the music side. Everyone else is amazing as well. Chloe [Sevigny] and Alice [Braga] are very sweet. Spence who plays my brother is the sweetest person in the world. You wouldn’t think that from his character, but he’s just the sweetest guy. Francesca Scorsese, Sebastiano Pigazzi, Vittoria Bottin and just everybody, they’re all amazing. We learned so much from one another, it was just the best.

What was it like shooting overseas and seeing things such as American supermarkets on the army base in Italy?

JKS: It was so interesting to see as it got built, because when we got there the entire set wasn’t finished. So while we were shooting, things were being built at the same time. When we first got there, it wasn’t basic but it was very minimal and we would stick to shooting in one main place. Once stuff continued to get built and everything, it was really weird to see because I got so used to seeing all these Italian brands – we would shop in the Italian stores to get our food and you’re speaking Italian. Then you get to the base and it looks like a Walmart and you’re like, “Wait, I’m not in America.” It was really strange.

Do you know if Luca would want to return to We Are Who We Are and is it something that you want to explore further as well?

JKS: I hope so! I mean, I would love to see more. When I watched the show in it’s entirety, it felt like a movie. I don’t know any of the tea or gossip, like if there’s new stuff happening or if season two is going to happen. If it does happen, I would love to be a part of it. If it doesn’t happen, it’s fine. It’s cool to also let it have one season and be open for people to explore and just think about themselves. I hope we’ll make some more stuff. I hope he makes more stuff and likes me enough to cast me in them. That’s what I’m gonna leave that question with. I hope he likes me enough to put me in more stuff because I loved working with him!

More on We Are We Who Are