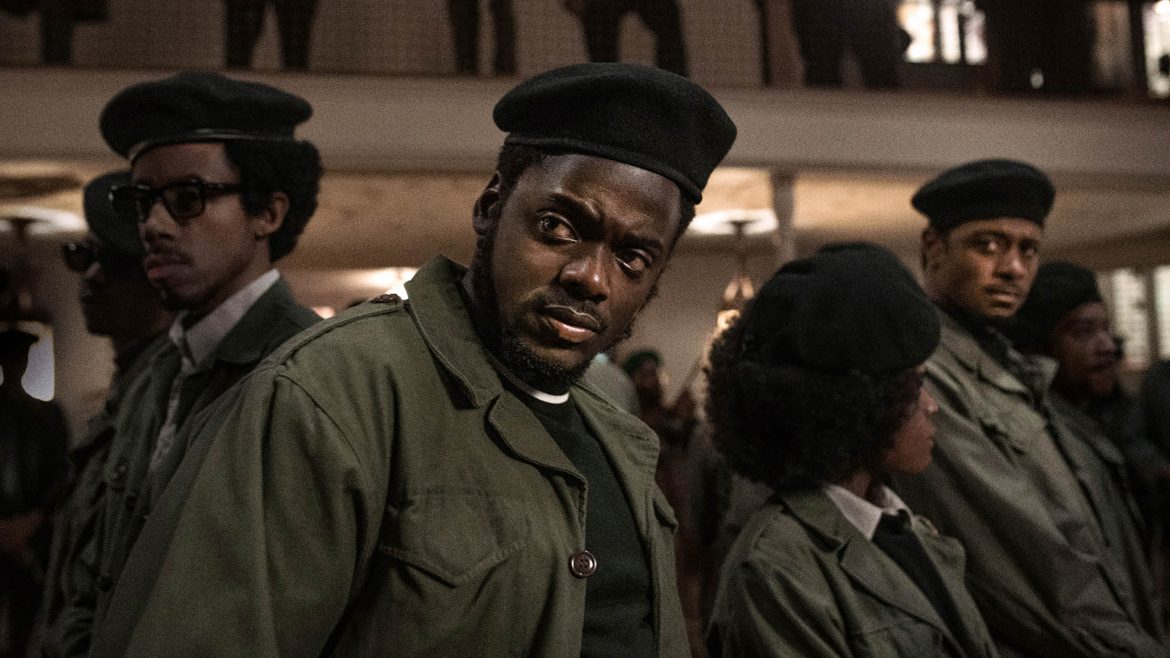 Judas and the Black Messiah isn’t one to mince words or dabble in metaphors like other films, even overtly political ones. Instead, it allows the story and revolutionary poetry of its subject, Fred Hampton, to speak for themselves. As Chairman of the Black Panther Party in the late 1960s, Hampton understood the need for drastic change was – and is – the only way to actual freedom. Gradual reform is a farce; a slow burning lie that’s been promised for decades if not centuries. In an impressive pivot for writers and comedians Kenny and Keith Lucas, as well as director Shaka King, Judas is every bit a harrowing war film as it is a biographical drama.

The American dystopia  – where armed law enforcement repeatedly harass, imprison, and murder already disenfranchised and impoverished communities with impunity – is an ongoing reality for many, and serves as the desolate setting for the film. It’s 1968 Chicago, leaders like Malcolm X and Martin Luther King Jr. are long gone, and Chairman Hampton (spectacularly portrayed by Daniel Kaluuya) is next on the FBI ‘s hitlist. He’s considered a massive threat to national security due to radical activity such as… a free breakfast program that feeds thousands of children a day, or emphasizing the need for access to adequate education. To combat and put a stop to these obvious atrocities, they plan to insert a mole into the Black Panther Party in order to get close to Chairman Fred and bring him down.

That mole becomes William O’Neal (LaKeith Stanfield), a car thief who’s left without many options once FBI agent Roy Mitchell (Jesse Plemons) gets a hold of him. O’Neal infiltrates the group and becomes their security chief, earning the trust of Chairman Fred and leaking BPP secrets to Mitchell. But he soon realizes that he’s gotten himself involved in something far bigger than he initially thought, and that one way or another, his life is over no matter what side he chooses. When Chairman Fred begins uniting warring street gangs and organizations in order to work together towards progress, and following a brief stint in prison that reinvigorates him and only makes his popularity bigger, the FBI decide to put an end to things with a raid on his apartment.

That raid – carried out in the night as Hampton slept and with intel provided by O’Neal – would end the revolutionary’s life. He was only 21 years-old. Judas and the Black Messiah is undoubtedly a tragic story, made all the more bleak by the fact that not much has changed, even with civil unrest and “radical” ideas having made a public resurgence following the ongoing events of last year. One of Shaka King’s goals with this film may be to educate and enrage you into further action, but the honesty in which the story is told, as well as the inspiring words of its historical figures, still manage to end things on a tepid note of hope.

Hampton’s gradual romance with speechwriter and activist Deborah Johnson (Dominique Fishback) finds the humanity and tenderness within the larger-than-life speaker, and gives Kaluuya a warmth that his roles don’t usually afford him. Stanfield brings an exceptional performance as well, turning O’Neal into a desperate and morally conflicted person rather than simply a scheming rat. This is by no means an attempt to vindicate the titular Judas – it’s more of a way to show how the man’s priority of self-preservation is an indicator for how he was just as much a victim of the white supremacist systems in place as anyone else. As Chairman Fred remarks in one of his speeches, “The cause of revolution is the conditions.”

Perhaps what’s most admirable about the film is the way it refuses to skirt around the injustices and the politics of its story, if in fact there’s a way to even do that when showing the short life of someone like Hampton. It offers the correct perspective, scrubbing away the whitewashed narrative of the Black Panther Party to show the reality of how the group advocated for social change that would benefit all people. As was understood by the chairman, and deemed too dangerous by the U.S. government, the struggle for Black liberation had the capacity to unite several political and multiracial movements at once, much as it still does today. King and the Lucas Brothers also make sure to lay out how conniving the government is when it comes to cracking down on any and all forms of dissent, violent or not, and the nefarious tactics they engaged with then and now.

But unlike its politics, much of Judas’s characterizations feel like they are painted with broad strokes despite the strong performances of the cast. O’Neal’s side of the story is bookended by the one and only interview the real man ever did, and it reveals a much more layered and opinionated person than Stanfield is able to give us. This has nothing to do with the actor’s capabilities – which have proven to be substantial and are still on display here – but rather the fact that the film is never afforded the time to probe deeper into its characters’ states of mind. Stanfield is left to sell O’Neal’s crises of conviction through his pained and perpetual look of deep concern and anxiety. He’s successful to a point; the actor can only take it so far before the film’s need to continue moving events along prevents O’Neal from becoming as intense of a conflicted character as similar double-crossers like Leo DiCaprio’s Billy Costigan is in The Departed. Likewise, Hampton also remains at arms-length. Kaluuya certainly brings the tenacity, strength, and intelligence needed for the role, but the script never allows a moment of true vulnerability, even in the softer scenes he shares with Fishback.

The film is shot rather conventionally overall, although a couple of Spike Lee-inspired camera movements and a jazzy improvisational soundtrack from composers Craig Harris and Mark Isham attempt to bring in some style and flair. There are some notably poignant details that Judas uses to further push its ideas in every scene, like the emotional toll of unjust police violence being told through the perspective of a grieving mother, or how the last thing Chairman Fred dreams about before he’s murdered is opening up a medical clinic. To say that this film is timely or topical would be redundant. Its message and story are tragically timeless, and radicalizing only in their plain honesty about true events. It’s about prioritizing the well-being of the people who need it most; the ones that the government does not provide for. If the film ruffles any feathers, then they are feathers that were long in need of some proper ruffling. The relevancy, importance, and power of Hampton’s story cannot be understated, and Judas and the Black Messiah gives it an overdue but sincere and illuminating telling. You can kill a revolutionary, but you cannot kill a revolution.

Judas and the Black Messiah premiered at the 2021 Sundance Film Festival.