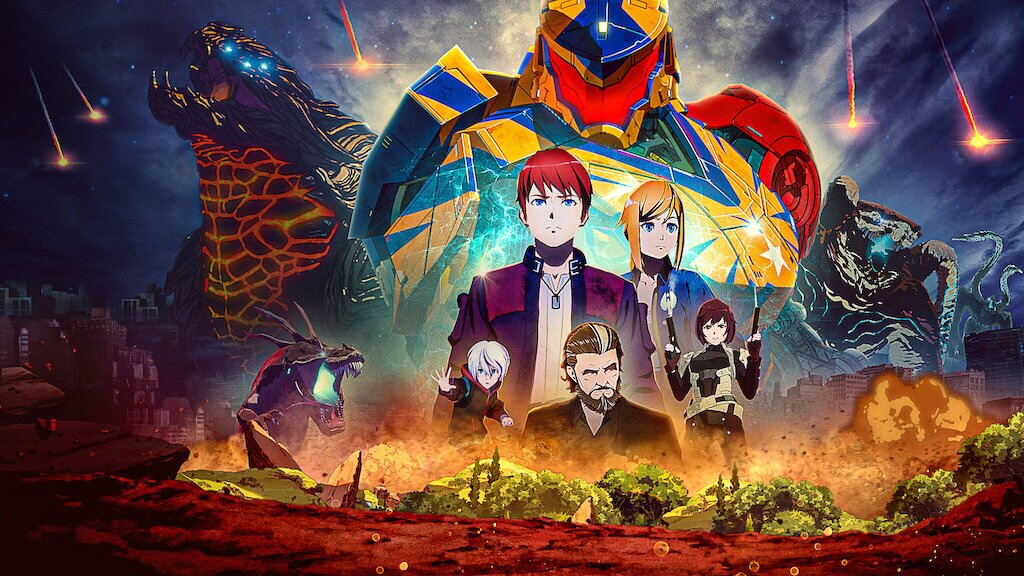 If you’ve ever heard of the Pacific Rim franchise, chances are that you already know the basic premise. Set in a world where giant monsters attack humanity, met with giant robots piloted by humans, Pacific Rim tends to put a focus on said pilots. It’s a familiar premise, most notably bringing to mind the anime series Neon Genesis Evangelion. Single pilot Evas become dual-piloted Jaegers, and Angels become Toho-reminiscent Kaiju. But while there are noted inspirations from the latter, there are several things that make Pacific Rim: The Black a promising mecha story in its own right.

Since Pacific Rim Uprising underperformed in 2018, the franchise has been in a state of limbo. Their planned third film never happened and talks of making a crossover film with Legendary’s Monsterverse haven’t come to fruition. With the films’ premise already adjacent to the aforementioned anime series, taking concepts introduced in the films to animation is a safe but smart direction for the property. This would be Netflix’s second go at a post-apocalyptic, cell-shaded anime series after Toho’s Godzilla anime film trilogy.

The Black begins in Australia, where Kaiju have successfully taken the continent after the Pan-Pacific Defense Corps declares it a lost cause. Two remaining Jaeger pilots, the Travises, save a bus-load of people, including their own two children, Taylor and Hayley, and take them to a base dubbed the Shadow Basin. This base has been abandoned by the PPDC in the mountains and acts as a safe home for Taylor and Hayley while the Travis couple attempt a trip to Sydney in their Jaeger to find help. Five years later, they still haven’t returned, and their children become restless waiting for the day they can see their parents again.

Taylor and Hayley are the focus of the series. Taylor (voiced by Calum Worthy) is the leader of Shadow Basin, which has become a haven for those rescued five years prior. As he tries to keep the Basin in line and protected, his little sister, Hayley (voiced by Gideon Adlon) grows more rebellious. She accidentally unearths a training Jaeger named Atlas Destroyer that’s hidden underneath the village, leading to a Kaiju attack that claims the lives of the people of the village. With nothing left but each other, Taylor and Hayley decide to trek to Sydney in their newfound Jaeger in search of their parents and the help they had sought to bring back with them.

Though the timeframe of the series in respect to the films is unclear, the setting indicates that it’s actually a prequel to the first film. As the concept of Pacific Rim heads to the small screen, the scale of the narrative shrinks as well. Rather than being about finding a way to stop the Kaiju and the plans of their otherworldly leaders, the Precursors, it’s about desperate people trying to live in a world dominated by these gigantic monsters. A story about soldiers fighting a war becomes reframed into a story about survivors in a post-apocalyptic landscape.

There’s solid groundwork laid out in the first three episodes, particularly in respect to the world that series writers Greg Johnson and Craig Kyle are trying to establish. Aside from introducing two new protagonists, it introduces new threats in the form of smaller Kaiju dubbed Rippers that can only be compared to hellhounds, a mysterious giant with a taste for these Rippers, and a morally dubious settlement leader with potentially dangerous ties. In the third episode, there are references to a larger black market system, seemingly akin to the one we saw Ron Perlman’s Hannibal Chau involved with in the first film. For two kids who have to pilot a Jaeger without weapons across a dangerous landscape with no backup or PPDC resources, it remains uncertain how these threats can be dealt with.

Suffice to say, these first episodes are largely used to establish a far different world than the one we see through the eyes of Charlie Hunnam’s Raleigh and John Boyega’s Jake. Pacific Rim: The Black enters additional unfamiliar territory for the universe, boasting a supporting cast more interested in survival and profit than fighting for the safety of the planet. Though the scale may feel much smaller, the world that’s been built shows promise as something with a lot of ground to cover (helped by an already greenlit second season). The story in the beginning is somewhat drowned out by the world-building, but the overall direction seems that it will lean further into these concepts as it progresses into the grander plot. Aside from that, the animation style works very well for not only the Kaiju and Jaegers, but the human characters as well. So if nothing else, there’s definitely that to look forward to in the series’ future.

Simply put, though it can appear like just another film tie-in product, Pacific Rim: The Black is anything but, pushing for a tale that deals with far more grounded stakes that are created in a dangerous landscape, and is much more emotionally charged than may be expected, particularly through the eyes of its young protagonists. Taylor and Hayley navigate a world they thought they knew, but actually know nothing about, acting as an audience surrogate. While the films only scratched the surface of Earth in a post-Kaiju world, The Black seems keen on entering fresh territory, which can only be further propelled by the fun of watching giant robots fight giant monsters. If it ain’t broke…