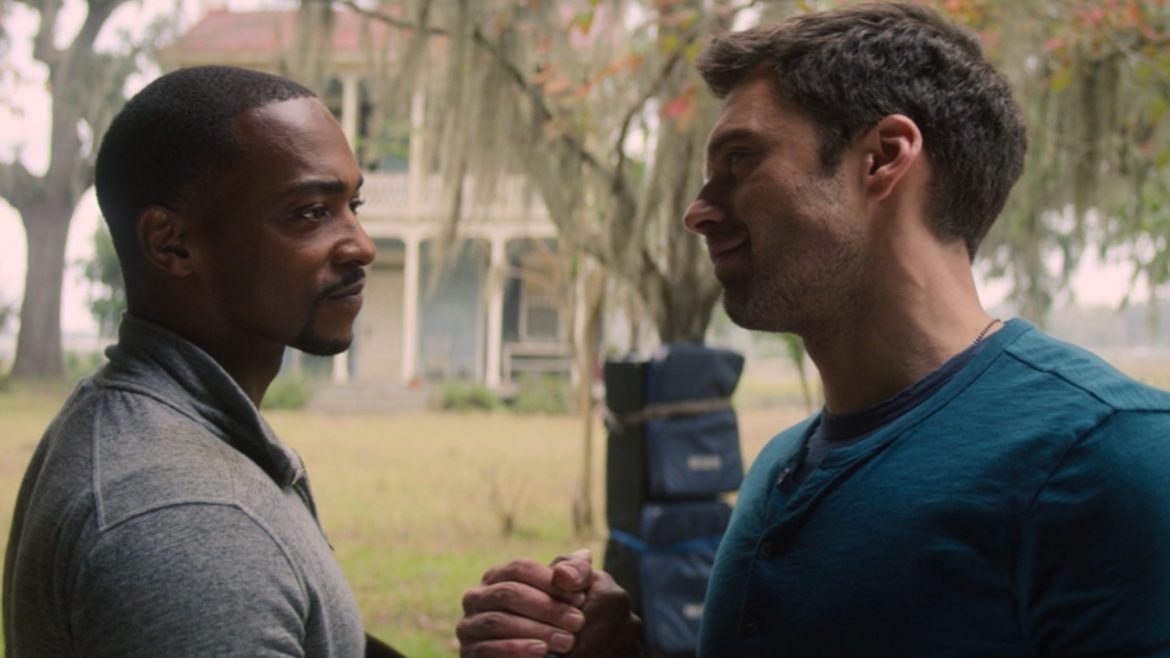 Spoilers for Episode 5 of The Falcon and the Winter Soldier follow!

After last week’s final shocker, episode 5 of The Falcon and the Winter Soldier displays some of the true potential of what Marvel can achieve on TV. Featuring moments that are arguably going to define Phase 4 of the MCU moving forward, there is just so much to enjoy and so much to sink in. But among all the highlights, just as many questionable decisions are raised when stepping back and looking at the series as a whole. Such are the consequences with this being the penultimate episode and it ending with more head-scratching than eager anticipation for the finale.

Opening on a traumatized John Walker, barely reeling in from committing murder in front of the world as Captain America, he fears that his time with the shield may be at its end. Making it all the more difficult when Sam and Bucky arrive to reclaim whatever honor that blood-stained symbol has left. It’s a 2 vs 1 beat down that’s been brewing and highly-anticipated for weeks now; ultimately standing as one of the most engaging action pieces of the entire series. It echoes the 2 vs 1 fight seen in Civil War‘s finale, with some visual nods and thematic callbacks (“That shield doesn’t belong to you”), and even though it may not reach those exact highs, it still evokes the right sentiment and is quite impressive for this show’s high standards.

After the brawl, Walker is taken into custody and discharged for his crimes, once again leaving the world without a Captain America. This is where the story takes an interesting turn; with no leads, plan, or goal in sight, Sam and Bucky take a break to reconnect with their own realities, instead of blindly pursuing Karli Morgenthau and the Flag Smashers who are now more anarchist than ever. This rhythm is very similar to that of the first episode, with there being one pivotal action piece at the beginning followed by more personal deep dives and character work. The decision to hit the brakes in such a way before wrapping everything up mostly works, however, it makes one thing very clear: the MCU’s biggest hurdle on TV isn’t spectacle or scale, it’s pacing and structure.

Prior to this episode, it was hard to really say what The Falcon and the Winter Soldier is actually about. Not in terms of plot but in terms of greater themes. Yes, not every piece of superhero media has to exactly be about something – it usually is because that’s why the genre is used in the first place – although it’s proven that the most resonating titles stand high above the over-saturated competition. The problem with this show is that it never really established thematic focus, glancing over interesting and fitting ideas across the last four episodes instead. Despite its cliched failings with the politics of the Flag Smashers, the show has done a swell job at bringing certain themes to light, such as with race, but it always just felt like an afterthought as it was hardly brought up again.

Suffice to say that things change in episode 5, as it finally feels like The Falcon and the Winter Soldier has found its thematic footing. With there being so much time to reflect, Sam and John Walker’s juxtaposition becomes more than just a contest to see who’s worthy of being the ‘real’ Cap. This is all thanks to Isaiah Bradley returning with a heavier role. The MCU has been criticized for being apolitical, as proven here with the murkiness of the Flag Smashers, but it’s quite refreshing to see the show not shy away from discussing the neglect of Black veterans and the military’s sole role in creating radicalized hate-mongers. Specific lines, although maybe too direct, still bring the point home.

John Walker saying “You made me” to his superiors after committing war crimes, a tired Isiah Bradley stating that “they will never let a Black man be Captain America, and even if they did, no self-respecting Black man would ever want to be”, this all paves the way for how Sam can possibly find the will to carry the shield. His race and background absolutely put him under different circumstances, but by carving a purpose all of his own, perhaps he can wash off some taint from this symbol and still do some good. He accepts that he doesn’t have to be a super soldier and that people won’t view him the same, the former is where Walker failed of course.

It’s somewhat of a shame that the show is practically at the finish line and barely getting back to these points. When looking at the series as a whole, certain episodes, as fun as they may be, feel too disconnected or tangential. Subplots like Sam’s familial life are introduced in episode 1 and are rarely brought up again until now. This isn’t to say that his family boat had to be constantly discussed, but glossing over threads connecting to his family after featuring them so prominently is certainly a choice. Speaking of choices, there are a few more than can’t be ignored.

The Flag Smashers are without a doubt the weakest link of The Falcon and the Winter Soldier. Almost everything about their skewed motivations has already been said, but it’s quite frustrating how unclear their endgame is. Not to say that the show can’t leave some surprises for the finale, yet whenever they vaguely discuss their grand plan, it just leads to more questions. Their next (or final?) step here is to stop a vote by the Global Repatriation Council that would displace refugees – another potentially interesting subplot that the narrative has skimmed over. The Flag Smashers’ motives as Robin Hood-like saviors are constantly brought up, but as to how that fits in with this GRC vote is still to be seen. A little lacking as one would hope to at least understand the villains more as the episode ends on a another stinger.

Can’t also forget Zemo, who after trying to escape the Dora Milaje last week, just kind of accepts his fate and is taken into Wakandan custody. A fantastic scene between Zemo and Bucky, it still leaves one kind of confused as to how easy he just gave up. With him in Wakanda, it wouldn’t be a shocker if he were to cameo or play a role in the upcoming series produced by Ryan Coogler. That’s not the only future setup though, as Julia Louis-Dreyfus makes her MCU debut as Valentina Allegra de Fontaine. A spy connected with S.H.I.E.L.D. who’s also gone by Madame Hydra, her surprise meeting with John Walker definitely frames her as the Nick Fury-type who could very well be assembling a version of the Thunderbolts or Dark Avengers.

It’s unfortunate to knock down this episode when it does its best to makeup for what was already lacking. It does mostly succeed, but only so much can be done when it’s this late in the game. Still, that heart to heart conversation Sam and Bucky have while throwing the shield, followed by Sam’s thrilling training montage, is enough to make up for that. The Falcon and the Winter Soldier once again proves that it’s at its best when taking the sweet time to unpack its title characters. Probably the one thing everyone can agree that the MCU has done so well on TV.

Our review of Episode 4 – Blood on the Shield