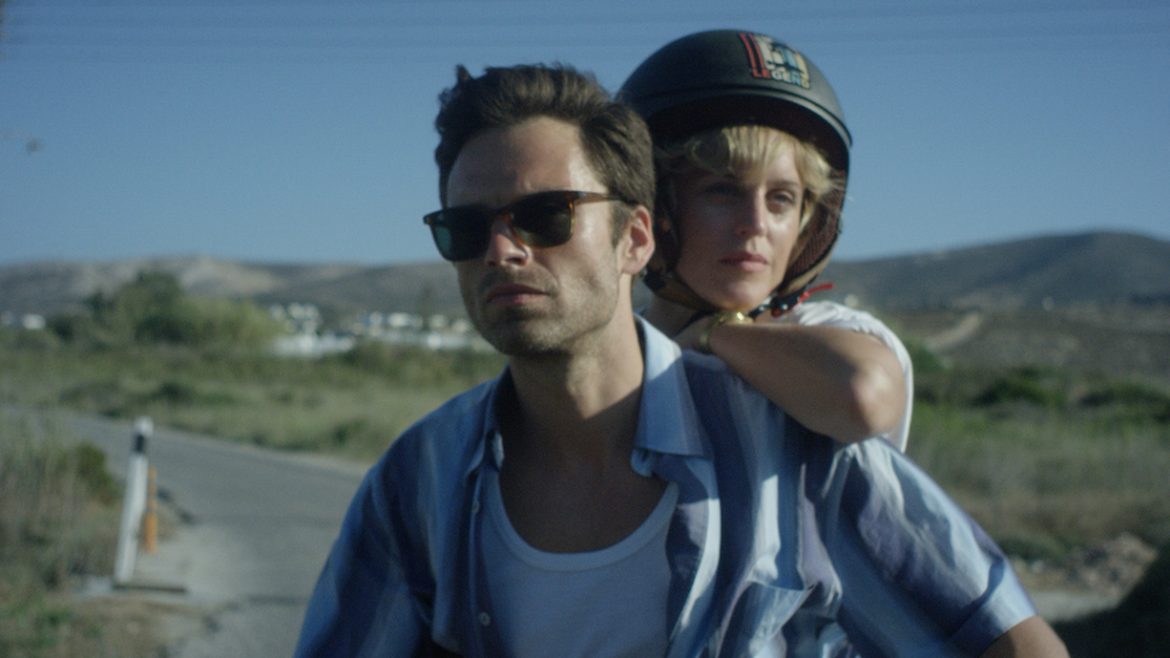 Irish Actress Denise Gough is a phenomenal performer with an impressive future slate lined up, including the upcoming Star Wars series Andor. But you can see her now, alongside Sebastian Stan no less, in a new romance from Greek director Argyris Papadimitropoulos. Set in Athens, Monday follows two Americans whose unpredictable affection is sparked at a late-night rave. Although, the film is much more elaborate than that. It explores what it really means to be in a relationship from the highest highs (quite literally) to the lowest lows. “A ferociously crazed subversion that thrills and engages to no end,” Gough navigates through this anti-rom-com effortlessly.

After being delayed like many other recent films, Monday is finally out for people to see and in having a chat with the lead actress herself, we got all the details on what it was like filming with Sebastian Stan in Greece and why this is the movie we deserve, over a year into the pandemic. It was so special to additionally have a detailed discussion on what it means to be a woman in film, specifically when shooting romance, and how empowering Gough felt during Monday.

Let’s start from the beginning, how did you first get involved in Monday?

Denise Gough: I was sent the script and breakdown for the film, and a link to Argyris’s previous film Suntan. I read the script and thought, there’s way too much sex and I don’t do those kinds of scenes, so I’m not going any further. Then my agent said, why don’t you watch Suntan. So I watched it and Elli Tringou, who’s a fantastic Greek actress, is naked through most of that film, and not for even one second did I feel she was hyper-sexualized or that any of it was gratuitous. It felt like she was really taken care of, she looked incredible. It had a depth to it that you don’t see very often, because all the weight of sex scenes falls on the actress usually. So when I saw that I thought that I should meet him.

As soon as I spoke to him, that’s when I felt really passionately about doing it. I just sent him an email saying, I know there are other names out there who have far more film experience and draw than I do – I was working in the theater and doing very well in theater but film is a different world that doesn’t always translate. He came to see me and we did a chemistry reading with Sebastian [Stan] and he gave me the part. So really it was Argyris who decided, I was his choice and I’m so grateful for that because that may have not happened if it was a big American film – because it’s just the way the industry goes.

What was it about this story that made you want to come on board?

Denise Gough: I mean, that sort of stuff I don’t really find that difficult. I felt really safe with the boys and the team, and because the film was mostly improvised, a lot of it was coming from what I was responding to from Sebastian or the direction Argyris had given. There were some nights when we were doing the party scenes at 4 in the morning, so it would be informed by tiredness. I just allowed everything to come through this woman. The acting and the emotional journey are things I tend not to try to craft so much as allow it to happen. It was a lot of just allowing, surrendering, and reacting to Sebastian.

Speaking of the wonderful Sebastian Stan, what was it like working with him?

Denise Gough: Sometimes you get really lucky, I have quite an intensity as an actress and sometimes your opposite another actor’s force that doesn’t want to take that. So to be opposite a man like Sebastian, who allows everything, even if I could see sometimes that he was like “you’re asking a lot here”, he always matched, always. He never ever said to me, “please don’t do that”. We would obviously question and push each other to make authentic choices. But he never asked me to come down from somewhere, he wanted me at my best all of the time and I really appreciate that in an acting partner.

I’ve been lucky in having had a lot of those acting partners, but it can go the other way. I like to think that I get very excited by people being kind of intense and at their best, but maybe I’ve been a victim of that too. I definitely feel like when you work with somebody who knows that you being your greatest makes them great, then you’re safe to fly. We jumped off the edge of the cliff together every single day and had a really great time doing it. But also, for that period of time we weren’t afraid to fight and get annoyed, I mean, we practically lived together in a country where we didn’t even speak the language. He is forever in my heart as being one of the greatest partners I’ve ever had and I hope to do something again with him.

Obviously, you shot on location in Greece, what was it like shooting completely on location?

Denise Gough: One of the things that the film has given me is Greece because I feel very at home there. I started learning the language pretty quickly and I’ve continued to learn the language since as I’m hoping to spend a lot of time there. I feel like the Greeks can hold all the crazy that I would bring and there seemed to be a lack of judgment. They also have a really great female culture over there. When I first met Argyris for dinner, it was him and 12 women. So I was like, this is either really dodgy or it’s like, amazing, but I’m not yet in a position where I can trust that this is amazing because as most women have to be, I was a little wary of things. But as I sat at that dinner table, I realized they were all like sisters to him.

They are women that he relies on for their truth and their support. Some of them took him to task on certain things. I watched him have stand-up fights with women who just would not back down – he is just surrounded by a really incredible female energy. We also had a female first assistant director whose job is basically to control the whole set. I would watch the way she held herself and the way that the men paid attention and did as they were told. There was respect for what those who identify as women bring to a project. I got to be a woman and they didn’t seem afraid of that, because some people can be intimidated. In Greece, it was very much “listen to the women, they have the answers.”

That’s lovely to hear! As a fellow woman in film, there are too many times where men in our industry overlook us.

Denise Gough: Exactly! The more these environments encourage us to be our best, the better it is. I’m doing a job at the moment with a stunt team. It’s two men who run it and I spoke to some of the women on the stunt team, and they said that they’re just amazing guys who really look after us and see how great we are at what we do. I was so happy; those are the things I want to be hearing! Men who really appreciate the great strengths that women bring to the table, and don’t try and hide away from it.

Now Monday‘s release is finally here after some delays due to the pandemic. What do you want audiences to take away from this film?

Denise Gough: I first watched this film before the pandemic, when it was going to come out, and I loved it so much. When I saw the trailer, I texted Sebastian and I said, we’re actually licking each other’s faces in the trailer – like we would be arrested for doing that now. When I watch it now, and I see the dancing and the grabbing and the holding, I think I just want people to see the film and come out thinking, we’re going to get through this and return to that again one day. We had it before and we can have it again.

We can all party and get to be all over each other soon, and we can do it in beautiful countries like Greece. I’m really excited about the release because it’s poignant for me now, when I think of what we were allowed to do. It shows the contrast between how we were living and how we’re living now. Maybe this film just feels like we’re finally getting to go out.

That’s what it reminded me of too! It just felt like the kind of fun I needed to see right now.

Monday is now in theaters and VOD

Wes Ball on ‘The Maze Runner’ Trilogy and...

Wes Ball Gives An Update on His Upcoming...