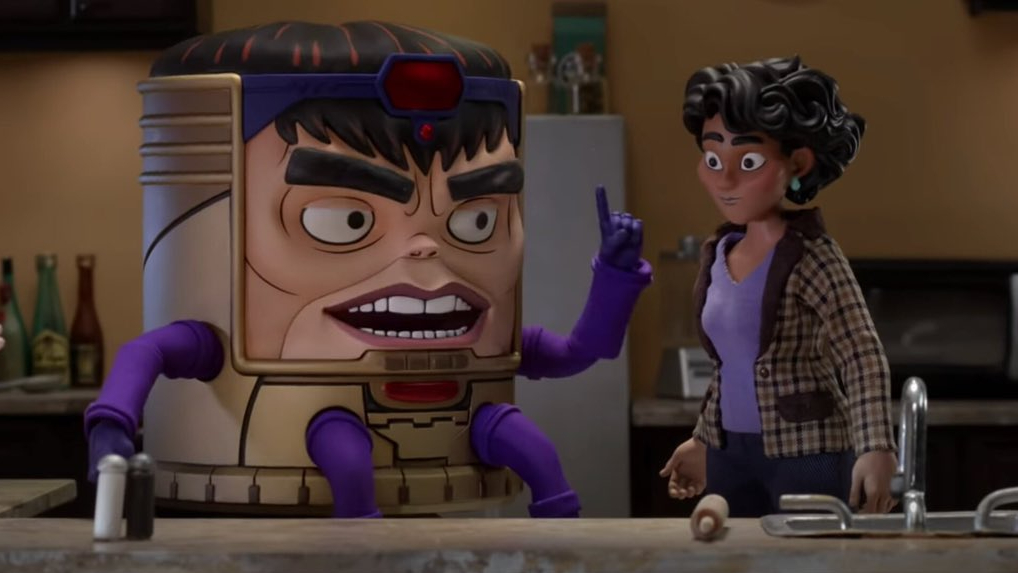 With the influx of new content offered by Marvel Studios on Disney+, it’s easy to forget that most projects not strictly related to the MCU have been since tossed away. Everything from animated shows, to Agents of S.H.I.E.L.D., to the influx of Netflix programs all faced their conclusions, forceful or otherwise, which leaves an awkward position for those seeking a break from the interconnected Marvel universe. Many fans ask themselves if there’s even still room for something non-MCU related, and luckily, Marvel’s M.O.D.O.K. has seemingly answered that question.

Marvel’s M.O.D.O.K. is a new Hulu stop motion series from the producers of Robot Chicken, featuring a star-studded cast of Patton Oswalt as the titular character, Jon Hamm as Iron Man, and Nathan Fillion as Wonder Man. The show is geared towards more mature audiences if you couldn’t tell, which means a lot more swearing, blood, and gore than we’re used to from anything with the Marvel logo attached. Consisting of just 10 episodes, it keeps tight continuity from entry to entry, making it a satisfying and quite bingeable experience in that regard.

The series takes some creative liberties with the iconic villain, notably giving M.O.D.O.K. a family and all the hijinks that come with. M.O.D.O.K. begins with his wife Jodie (Aimee Garcia) wanting a divorce, with his subsequent arc relating to his estranged relationship with his family, hubris, and self-destructive behavior getting him into more trouble than is often necessary. If that all sounds heavy-handed, you’re in luck, because all of this is told through a comedic lens.

The only downside to this is that not all of the comedy lands. Some of the decisions and dialogue can be especially grating, but when a joke does land, it goes hard, with many great gags and lines in each and every episode. And yes, it does offset a lot of the ones that fall flat. Though the biggest strength of Marvel’s M.O.D.O.K. isn’t necessarily the humor, universe, or its setting – it’s the surprising emotional maturity when dealing with heavier, more intimate moments.

Some intimacy may turn into a gag, but when it’s something like M.O.D.O.K. learning that his daughter Melissa (Melissa Fumero) wants nothing more than approval from her father and hating herself for it, the show let’s that moment speak for itself. Especially in the back half of the series, many more personal scenes end up being impactful and it’s a testament to the writers for not succumbing to sacrificing sincerity with a joke. Even for a comedy, that’s an important aspect to have and a great sign for things to come if this gets a second season.

If you’re personally hoping for more of what you saw in the promotional material, such as Wonder Man and Iron Man, you may find yourself disappointed. However, the broader Marvel universe is utilized to an extent, such as an entire episode set in a certain iconic mythical Marvel location, but the writers take a lot of creative liberties, and their takes may or may not disappoint depending on what you’re looking for.

Marvel’s M.O.D.O.K. is a fun ride through and through, with some hilarious gags and dialogue mixed in with more than a few grating ones, a visual style that just pops, and a genuine story with some thought and care put into it. It’s by no means the most thought-provoking show on TV, but it doesn’t need to be. It carves its own little pocket of the Marvel universe that asks you to stick around for the ride. And it’s well worth a full viewing.