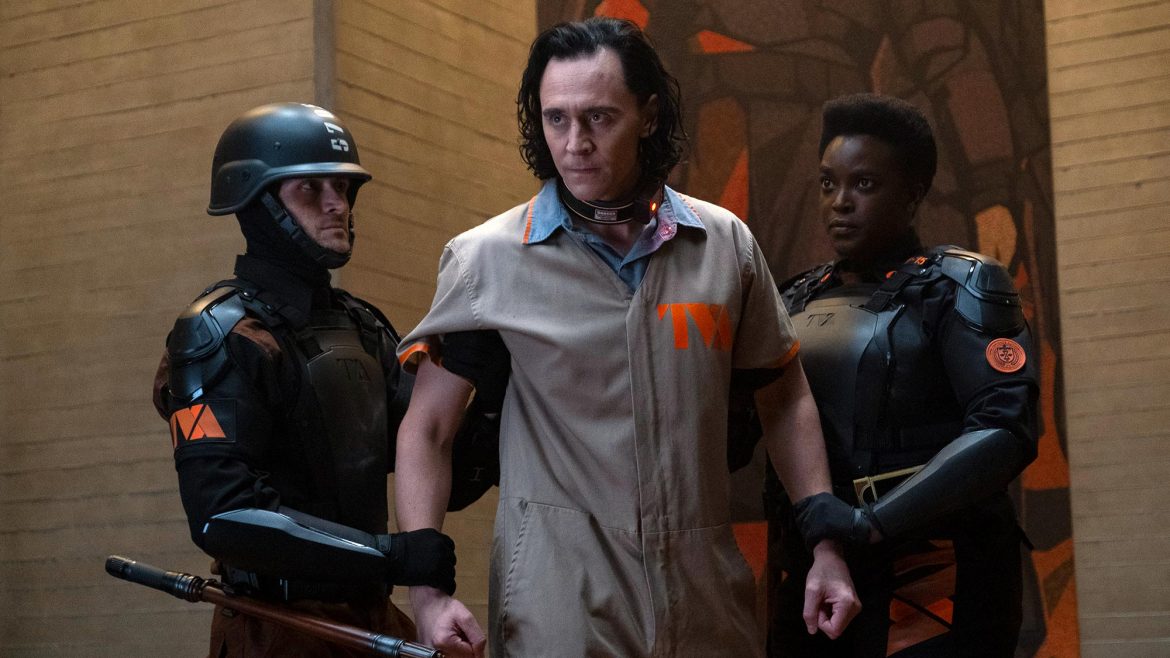 Minor spoilers for the first 2 episodes of Loki follow!

Following the time-traveling events of Endgame, the timeline has been disrupted as Loki (Tom Hiddleston) escapes his imprisonment at the end of 2012’s The Avengers. Attempting to correct this, the TVA (Time Variance Authority), an organization dedicated to preventing timeline anomalies, captures Loki and puts him on trial. From there, the God of Mischief partners with Agent Mobius (Owen Wilson), who hopes that Loki can lead them to a devious killer wreaking havoc across the timeline. Marvel’s latest plays heavily on mystery and cat-and-mouse tropes, with the time travel aspects and quirky characters invoking Doctor Who. Focused on a character that’s certainly gotten more spotlight than any of the Marvel Disney+ leads so far, the season premiere of Loki nonetheless dedicates its time to the inner workings of its lead before moving on to the larger plot.

Much of the first episode is focused on laying the groundwork for the rest of the season, both with the worldbuilding of the TVA and with Loki’s character. The TVA is the first deep dive into the MCU’s version of the Multiverse and how exactly it functions. This comes ahead of What If…? and Doctor Strange in the Multiverse of Madness fully revolving around the Multiverse, as well as Spider-Man: No Way Home heavily rumored to do the same. The character-work is similarly needed, as Loki‘s version of its lead picks up from The Avengers, Loki’s only appearance where he’s portrayed as neither a tragic villain nor an anti-hero, but rather a gloating megalomaniac.

The show doesn’t shy away from this, and while his homicidal tendencies are toned down, his superiority complex is fully present. In this vein, the drive for the season appears to be whether Loki can become a good person or if he’s bound by his destiny of betrayal and evil. This theme strongly parallels Loki’s arc in the Agent of Asgard comic run (read more on that here), a series that very likely inspired the direction of this show.

While the dive it takes into Loki’s character is interesting, the first episode is rather clunky. The first few minutes feel awkward as Loki is processed through the TVA, and even Hiddleston’s usually stellar performance becomes slightly wooden and forced at times. The premiere is saved somewhat by the introduction of Agent Mobius and the dynamic between Mobius and Loki is incredibly fun to watch. The first episode also dedicates a lot of time to recapping Loki’s previous appearances. Since this version is the one from The Avengers, Loki is missing three movies worth of events that he never experienced, and the premiere humbles him at the most egotistical point in his history by showing him his counterpart’s fate. These moments are certainly necessary for his development, and Hiddleston sells Loki’s reaction to them in a genuinely moving way, but they also take up perhaps too much time and approach the feeling of a clip show, seeing as all of the footage is taken directly from the films.

The following episode recovers its stride as Loki accepts his newfound role as an advisor to the TVA, overseen by Mobius. The two begin to look into how their killer could possibly be evading the all-seeing eye of the TVA. Their dynamic is fleshed out further here, as are the themes of destiny and how the concept implies a lack of freedom. The show uses this as a base to develop what will clearly be Loki’s overarching motivation for the rest of the season, with the god seeing his status as a variant within the timeline as an opportunity to break free from the laws of the universe. As the plot makes large developments and Loki’s plan begins to take form, the show sets the stage for what will hopefully be a great remaining four episodes.

Loki also enters the scene with an advantage above the previous Marvel Disney+ shows, and that’s the lack of limitations from its premise. Both of the Marvel shows that came earlier this year begin with a foregone conclusion and spend the rest of the series building up to that point. Wandavision is here to show how Wanda Maximoff becomes the Scarlet Witch and how she connects to the world of Doctor Strange while The Falcon and the Winter Soldier exists to show Sam accept the mantle of Captain America. While these shows try to raise doubt throughout their seasons in order to build tension, many viewers were entering these projects fully aware of where they would be going. Loki has no such expectations, having veered off into completely uncharted waters with a character that’s already essentially a finished product, sans a redemption arc, of course. This will hopefully provide the show with the freedom to do what it likes without being bogged down by the rules of the cinematic universe that spawned it.

This isn’t to say that Loki is entirely standalone, and even a seemingly throwaway line in the first episode may be setting up Marvel’s next big event. The show also immerses itself fully in the events of Loki’s alternate life, detailing what Loki’s “destiny” is, as well as providing insight into Loki and Thor’s time growing up as siblings before Loki’s betrayal in the first Thor movie, with more hopefully being elaborated on in the coming episodes. Loki also specifically lays out the main character’s powerset for the first time in his history. While previous appearances made it clear that he wielded some form of magic, mainly focusing on illusion-conjuring, these episodes do a lot to ground what Loki can actually do.

This is a smart move as Loki’s ill-defined abilities worked perfectly well when he was acting as a chaotic supporting character, but would complicate things in a story where Loki is the lead. The show takes further steps to ground Loki, including having in-universe explanations for his being de-powered in certain situations. While this may upset certain fans who enjoy seeing Loki at his most powerful (something certainly coming later on in the season), this narrative choice works to show Loki pulling himself up from his lowest point without his powers or weapons to back him up.

A lot of Loki’s strength comes from its lead characters. Despite the aforementioned stumbles in the first episode, Hiddleston is (as always) delightful to watch as Loki. Seeing him caught off guard and taken out of his element gives the character new appeal, and the godly con-man is sure to have some twists in mind in the future. Alongside him is the most consistently entertaining performance in the show, Agent Mobius. While Wilson plays him as a sympathetic but stretched thin agent, there’s clearly more under the surface, with only a bit of it being hinted at in these first two episodes, and wielding charisma reminiscent of Clark Gregg’s Agent Coulson before him, Mobius is sure to become a fan favorite. The rest of the cast doesn’t get a lot of chances to shine in these episodes, but there’s room for them to do so in the future, particularly with how the second episode leaves off.

By the end of the first two episodes, Loki definitely shows promise, but doesn’t perfectly deliver on its fascinating concept. Be that as it may, it features fun characters, a unique central plot, and fascinating worldbuilding, and while the premiere may be disappointing to some viewers, later episodes will hopefully regain their attention.