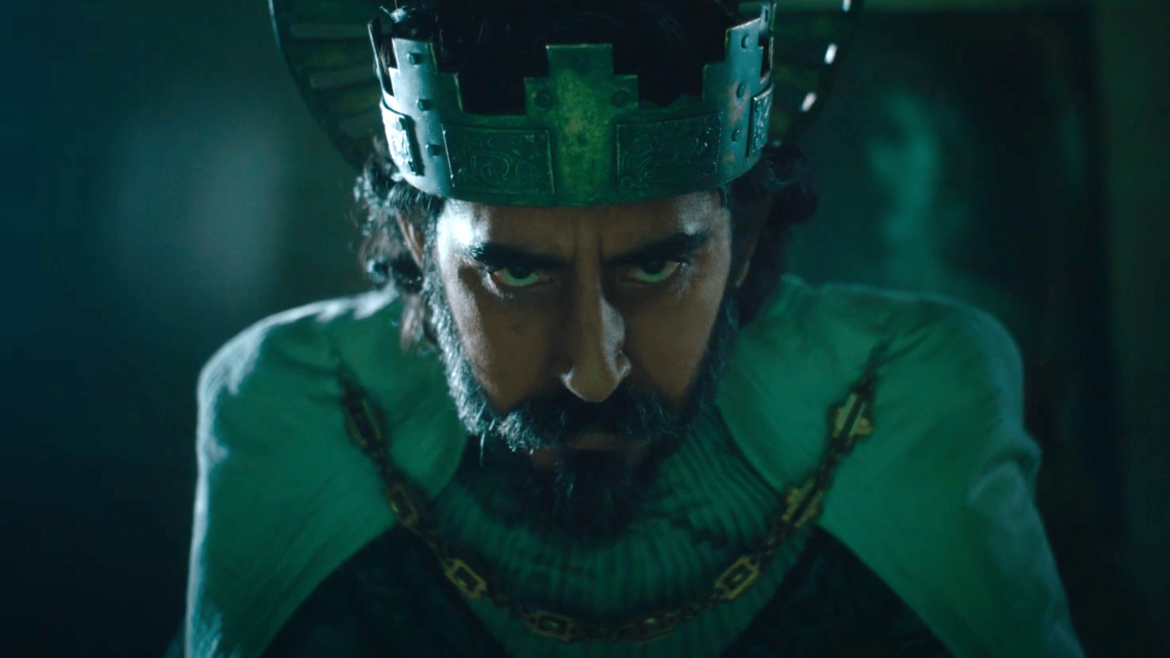 The latest film from A24 and A Ghost Story director David Lowery, The Green Knight is based upon the Arthurian legend of the same name. A deeply contemplative interpretation of the source material, Lowery’s adaptation is wholly engrossing, taking the classic story and turning it into a monumentally ambitious, much less conventional tale. With carefully delicate direction, top-notch performances from the entire cast, and a number of inspired additions to the plot, The Green Knight makes an excellent case for itself as an artistically mature retelling of legendary proportions.

Perhaps the keystone of The Green Knight’s staggering cinematic ambitions, a career-defining performance by Dev Patel finds itself bearing the brunt of the film’s emotional storytelling. The Lion and Slumdog Millionaire star brings his A-game to this medieval epic and makes it clear from the very start. Perfectly embodying a version of the myth’s Sir Gawain that feels detached from the glamorous life of a round-table knight yet compelled to it all the same, Patel’s quietly emotive presence makes for a deeply moving centerpiece to a thematically intricate, narratively complex film. Much like any bildungsroman, this is a movie about identity, and Patel manages to craft a persona that feels equal parts malleable as it is stubborn. With each step of the way, Gawain becomes more and more fully realized until he confronts his fate.

The film follows the same basic story as the original myth, also known as ‘Sir Gawain and the Green Knight.’ When a Christmas celebration at Camelot is interrupted by the booming voice of Ralph Ineson as the Green Knight, Gawain accepts the intruder’s challenge to face him in a game. The premise is simple: whoever lands a blow upon the Green Knight can wield his axe for one years’ time, at which point they must meet him at the Green Chapel where their strike will be returned – whether it a scratch or a fatal wound. As it happens, Gawain strikes the Knight down, cutting his head clean off, and is subsequently doomed to meet the same fate a year later. As in the legend, The Green Knight is an exploration of the nature of honor and mortality, as well as the looming sense of duty that a person feels when engaged with a sense of purpose and their own fate.

For better and perhaps worse, the film complicates the fable’s simple narrative structure in order to tell a more holistic, grounded story. Essel, played by Ex Machina’s Alicia Vikander, is a significant new addition that adds a level of conflict to Gawain’s pre-knightly journey. A resident of a local brothel, Essel’s romantic relationship with Gawain complicates his destiny to face the Green Knight and assume the throne. Not only does her presence initiate discussions of fealty but it introduces an unmistakable seductive, sultry tone that oozes throughout every scene; the consequences of several sensual scenes between the two characters permeate Gawain’s journey, bringing the sickening weight of guilt to his every interaction.

This guilt and conflict is best felt towards the end of Gawain’s quest when he is alone with the lady of the castle where he takes refuge in the days before his Christmas fate. Also played by Vikander, her role here is the same as in the myth – a pressurizing force against which Gawain must hold fast to his knightly values. While her lord is out hunting, she woos the unsuspecting Gawain, bringing him to his absolute lowest point, leaving him questioning his honor and loyalties. Her seductive advances are the final straw for Gawain, causing him to break a promise with the castle’s lord and further sacrifice his integrity. Full of clever wordplay and visual symbolism, the time spent in the castle makes for a clear message; Gawain is not the honorable knight he should be.

This is not an optimistic movie. Rather than the grow-as-we-go moral of the original tale, Lowery’s take wallows in dourness, its libido for moody angst an insatiable driving force. Many will point to a more conflicted, less pure realization of Gawain as the root cause of this tonal difference, but it can still be felt in every other aspect of its story. Most notably, the ending of the film changes key elements of the legend, keeping it in line with a more repressed mood, losing the optimism and positivity of the Arthurian source material. This, for some, will make for a less-than-satisfying narrative experience, but others will see it as yet another strong creative decision that sets this adaptation apart from the original.

In the case of the film’s ending, the issue at large lies not in tone, but in clarity of storytelling. After a single watch, many will be left wondering the significance of certain plot elements; with the final moments changed, previous character interactions are recontextualized and muddied, losing the piercing clarity of the original myth’s thematic throughline. While many added storylines are worthy of praise, like Barry Keoghan’s charismatic (as usual) appearance, they also add a layer of fog to what would otherwise be a thematically tight, if albeit simple film. The dual roles played by Alicia Vikander are a similar point of potential confusion, notably due to story changes made in regards to Morgana le Fay, a spell-caster and Gawain’s mother. There are a lot of quick twists and turns in The Green Knight, and David Lowery doesn’t exactly hold hands along the way.

One thing’s for certain: Lowery is at full command of his cinematic senses at the helm of The Green Knight. If the line-up of stellar performances wasn’t already an indicator, his attention to tone and immersion extends to just about every aspect of the film, leave for a few sporadic, oddly-placed quips and wise-cracks. An expert sense of scale and place are accompanied by exquisite locations and production design, and nary a moment is gone to waste. Its many character introductions are among the best in recent memory, and ever-moving long-takes are used often to continue the forward momentum of even the lightest of actions or conversation, boldly contrasting with similarly common locked-down angles. The passage of time is surprisingly also presented in an engaging, unique way — a puppet show that foreshadows the story of the film itself with the backdrop of the changing seasons.

All of this is, of course, elevated further by stunning camera work by cinematographer Andrew Droz Palermo who employs clean, wide lenses to capture this grandly intimate quest. Their approach to lighting and framing everything down to the most tense and anxious moments with idealized mannerisms helps create a distinct visual language that furthers the darker, subdued tone of this film as a mythological epic. Furthermore, refreshingly saturated colors and high contrast photography during certain scenes bring their own elements of fantastical realism, pushing the boundaries of this unromanticized Arthurian romance.

All of this is to not even touch on the towering nude giants that evoke ethereal imagery reminiscent of 2016’s Arrival or the fairy tale-like accompaniment of a gorgeously rendered anthropomorphized fox. Such is the case with The Green Knight: there’s a lot going on, and it’s hard to process it all at once. From start to end, it is a splendid piece of technical craft with much darker intentions than what one may expect from an Arthurian adaptation. There’s nothing quite like it.