‘Cinderella’ Review – This Girlboss Fairytale Doesn’t Quite Make the Cut 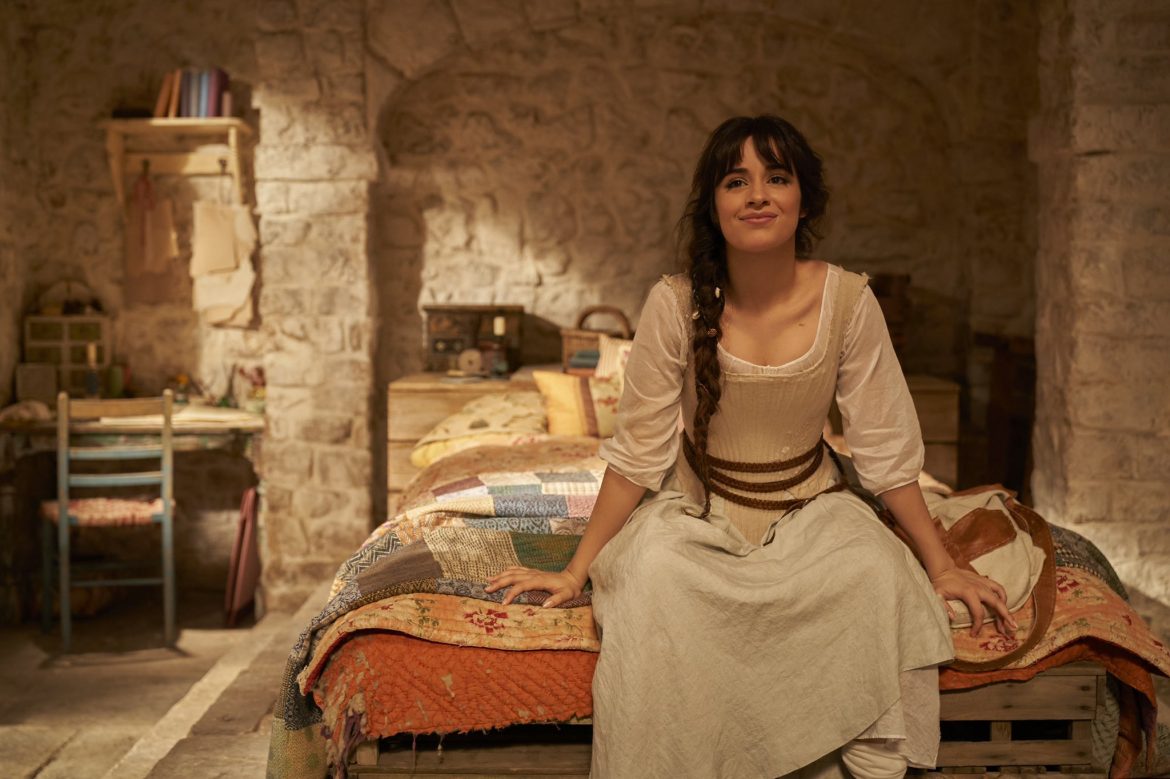 Cinderella is one of the most famous fairytales of all time. The most well known adaptation of the modern era is Disney’s 1955 animated Cinderella followed closely by the 1997 adaptation of the stage musical, Rogers & Hammerstein’s Cinderella. The story is so popular I could easily rattle off at least half a dozen Cinderella-inspired stories or films from the last two decades alone. The premise is simple, there is an orphan girl who is mistreated by her step-mother and step-sisters, who manages to stay strong despite it and dream for a better life. She wants to attend a ball set up by a prince to find his wife but her step-mother sabotages her chances. A magical fairy-godmother, however, comes to her aid with the caveat that the magic runs out at midnight, she falls in love with the prince at the ball but has to make a hasty exit before he knows who she is, but luckily she left behind a glass slipper magically conformed to her slender feet so that the prince will know whoever fits the shoe is his beloved. The orphan girl fits the shoe much to her step-mother’s chagrin, she goes off with the prince and they live happily ever after. 2021’s adaptation of Cinderella from director and writer Kay Cannon is a wholly recognizable story, but it attempts to subvert the classic fairytale.

What easily sets Cinderella (2021) apart from its predecessors is the fact that it’s a jukebox pop musical set in a semi-traditional, semi-modernized world. There are peasants, princesses, and kings, but the peasants are given announcements in the mercantile square in the form of a rap, the princesses wear dresses made of chiffon, and the king has his own gospel choir. A few modern flourishes stand out against the rest of the film, but overall it consistently makes a visually interesting and cohesive world. The film is inherently campy because of this, and that’s perhaps its best quality. Each character has their own musical style and all the song sequences are fun and lively. Billy Porter as the Fairy Godmother clearly enjoyed himself in his role, and his entire sequence is great, including a rendition of “Shining Star”. Seasoned Broadway star Idina Menzel as the Step-mother especially shines whenever she’s given the chance to sing and commands the screen at every other moment. Unfortunately, she’s acting alongside Camila Cabello as Cinderella.

Camila Cabello can carry a tune and she isn’t a flat-out terrible actress, but she cannot lead a musical. Or at least, she couldn’t lead this one. The original pop song written for her character, “Million to One”, perhaps could’ve been elevated from its generic writing with another artist, but Cabello does it no favors. She’s not a powerhouse like Menzel and she’s not able to inject her performances with the drive needed to carry the narrative. The “I Want” song is a staple of musical theater, and when your main character can’t sustain her passion with that performance, that’s an apt indicator for the rest of the film. Cinderella in this film is written in an almost “I’m-not-like-other-girls” fashion, and her personality is mainly defined by her “quirky-ness”. Perhaps this writing decision could’ve been executed better with another actress in the lead, but it certainly does not work well with Cabello.

There is a lot of tension lacking from this film. In the beginning, the prince is defined as someone with a fraught relationship with his expected legacy. He hates the expectations that come along with being king. His father threatens that if he cannot find a wife, he’ll give the throne to the prince’s sister. Unlike the prince, the princess very much wants to be queen. She has many forward thinking ideas for the nation and an I-mean-business bob haircut. She’s at one point described as the “people’s princess” even though at no point do we see her interacting with the people in any capacity. Her character is designated to being awkwardly placed in a few musical sequences to remind the audience that “hey, she exists and is a victim of misogyny”.

See, if the prince doesn’t want to be the future king and there’s a way better suited alternative, what’s the problem here? The king is meant to be the enforcer of these outdated ideas, he pushes his son into a role he doesn’t want and enforces the misogynistic policies of the kingdom. He, however, is the one who offers to give the princes’ role to the princess in the first ten minutes of the film which would effectively solve nearly every problem. The narrative basically tells us how it will resolve itself at the very beginning, so it’s difficult to maintain a sense of tension throughout.

Cinderella is meant to be consumed at surface level and it cracks under too much critical pressure. One of the main changes made from the original tale is that Cinderella now wishes to become a dress maker. This makes sense from a storytelling perspective, give your leading female character tangible aspirations for herself. In the film, though, so much of her wishes are wrapped up in not only designing and making dresses, but selling them. She only decides to go to the ball so that she can display and market her dress-making abilities, she wants to own a shop, etc. I can’t reveal too much without spoiling the film but the resolution for Cinderella’s conflict isn’t terribly well thought out.

The real enemy of the film is meant to be misogyny, that’s why the princess cannot be queen, why the Step-mother stomps over Cinderella’s dreams, and even if Cinderella left her clutches, women owning shops are outlawed. There’s a very large focus on Cinderella’s inability to work as a woman, but no commentary on class as a whole which is just as integral to her story. While the traditional Cinderella is a rags to riches story, this narrative wants you to root for Cinderella’s chance to upgrade from struggling under misogyny to struggling under capitalism under the guise of being a self starter.

There’s a female character introduced that wants to hire Cinderella to subvert the idea that the prince has to save her. Yes, it’s somewhat feminist that she doesn’t have to constantly seek approval from men, but the narrative just replaces that idea with having to constantly seek approval from people with more money than her. Arguably, in the most famous versions of the story, Cinderella was never actively attempting to woo the prince or prove herself to anyone, which makes this retelling even bleaker. Selling her dresses to this woman is presented as Cinderella’s only “real” mode of success that she wants for herself to create conflict in the narrative. In a film meant to modernize and recontextualize the fairytale ending Cinderella finds for herself, the final product is quite messy when considered critically.

Many online have called this the “Girlboss Cinderella Film”. I agree, and it is not a good thing. “Girlboss” is a term that originated from the title of Sophia Amoruso’s autobiography, the founder of a fashion retailer. It has recently morphed in popular culture to mock the concept of the “girlboss”. Women have often struggled as leaders because of the male dominated nature of leadership in practically all industries, and the plethora of stereotypes that come along with that such as being catty or cold. Trust me, I understand. I’m writing a film review right now. Do you know how many women there are in film criticism? Not a lot! And besides that, I’m an engineer. When I’m not doing this, I’m doing engineering things. Do you know how many women are in that industry? Less than there are in film criticism! My friends call me girlboss, I call myself a girlboss, but those are all jokes in good faith. The term does not mock women who choose to work or have careers.

No, the reason that the term girlboss is a mocked term is that it is a marketable phenomenon, it’s selling the idea of success for women as becoming a capitalist, of owning a business or becoming an executive level employee. This is not a true ideal for women to strive for, because due to the way the economy operates, this is only attainable for a handful of people. And even then, it just leads to the exploitation of other women who work under these “girlbosses”. The unironic girlboss is one who cares about the horrors of misogyny, but not those of capitalism, which is unfortunately exactly how this film operates. It could’ve been reworked to avoid this trap, but as it stands, it is the Girlboss Cinderella movie. Technically, considering the movie takes place in a Kingdom, capitalism shouldn’t exist. It should be a feudal society, and yet, still, so much of the film revolves around Cinderella’s right to participate as an entrepreneur.

I wanted to like this film. I like musicals, I like camp, I like Cinderella retellings, and I thought it had real potential. But there were unfortunately too many misses for me. Maybe I could’ve ignored the larger issues with the conflict in the film if the leads were charming and enjoyable to watch, but they aren’t. I haven’t mentioned the performance the prince gives, but that’s because it’s painfully average and unremarkable. The frustrating thing is that there was real potential for Cinderella. I understand exactly what Kay Cannon wanted to accomplish, I see her vision, and I know that somewhere in what was presented, there could’ve been a movie I really loved. Now all I have are my criticisms of Girlboss Cinderella and a few mashups I like on the soundtrack to add to my playlist. There’s one original rock song that Idina Menzel leads that’s very good. It’s somewhat reminiscent of the Descendants song “Evil Like Me”, in which Broadway star Kristin Chenoweth duets with Dove Cameron. Just like Cameron could not keep up alongside Chenoweth, Cabello could not keep up alongside Menzel. I will be streaming that song. As for the rest of the movie, not so much.