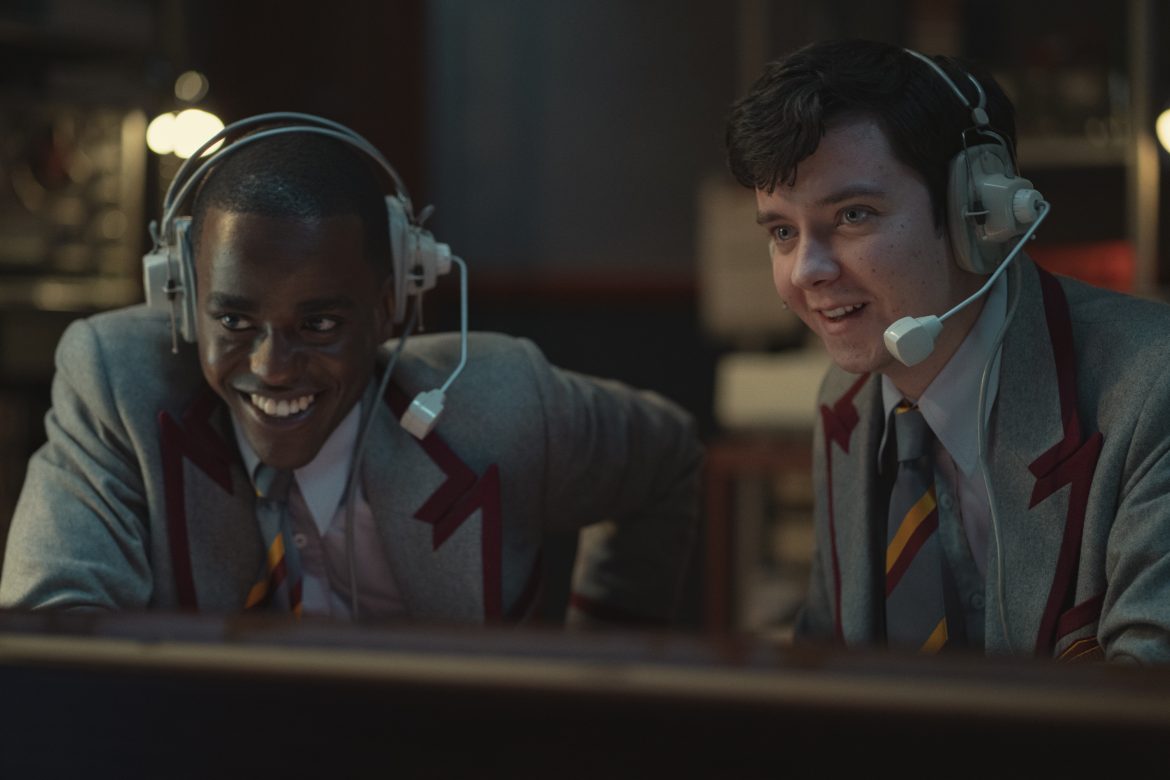 After a year and a half of waiting, Sex Education is finally back with a third season, and it’s back in style. A summer has passed since the events of last season’s finale and season 3 quickly gets to work catching us up, with new relationships having been formed and old ones further developed, among other things. These new episodes, as can be expected, continues to carry over the quality of previous seasons while introducing new characters, stakes, and plotlines.

The dynamic filmmaking that the series has shown off before is back in full force. Whether it be montages set to licensed music or one-shots that seamlessly transition the scene’s focus from one character to another, Sex Education makes sure to never be boring, be that through story or visuals. Season 3 feels like a quick watch with a returning 8-episode length, and while there is a slight lull in the middle that breaks up the pacing, it quickly regains its footing and dashes to a fantastic finale. Character progression feels natural with what has been established, but the easy choices are also rarely taken. Nothing quite reaches the frustration of the second season’s finale, though it gets close, as relationships are strained and tested and characters are presented with difficult situations to find their way out of.

When we revisit our main cast, Otis has moved past the clinic following a falling out with Maeve, who herself has grown closer to her neighbor, Isaac. Jean is struggling to reveal to Jakob that she’s pregnant with his child, Adam and Eric are working to define their relationship, and Aimee is working her best to find happiness with Steve. The cast reforms at the start of the first episode and quickly find themselves faced with the new normal for Moordale. A new head teacher, Hope, has taken over Moordale High following Michael Groff’s disgrace at the school play.

Hope intends to rebuild the school’s reputation in the wake of its being dubbed the ‘sex school’ by the press. While the role she plays in the show should be rather predictable for anyone familiar with the high school dramedy genre, the slow build to her true beliefs being revealed make her a more compelling antagonist than many of the others that fall under the trope. That said, her jump to the breaking point does feel rather abrupt, and the simultaneous attempts to humanize her make for a somewhat messy character arc. Although her arc may be muddled, Hope doesn’t have too many scenes to herself and mainly exists to build up the situations that encourage growth in Moordale’s cast of students.

While the show does elaborate on characters that everyone’s been expectantly waiting to know more about, it also shines the spotlight on several others that may be surprising. Rahim, coming off his sudden breakup with Eric, not only remains in the story but develops a friendship with his former romantic rival, Adam. Michael Groff himself follows in the path of his son, Adam, getting a large amount of development as he finally begins to unpack the choices that led him to lose both his job and his marriage. The first few episodes also see Ruby further reveal a softer side of herself.

Notably, season 3 introduces Cal, a nonbinary student who clashes with Hope, unwilling to be forced to adhere to a gender binary school system. Cal is a fleshed-out, three-dimensional character and is treated with the same respect as the rest of the cast, not falling victim to the tropes and stereotypes that are commonly associated with nonbinary roles in media. They’re paired with Jackson, a character that’s already had a great arc in previous seasons and now further grows and explores his newfound freedom from his strict life alongside Cal.

Sex Education, once again, isn’t afraid to get into more serious topics for a comedy series, touching on bigotry against nonbinary and gay people, as well a general failure of the school system to inform teenagers about sexual health, among a number of others. The latter one has been touched on in previous seasons, but is played far more critically and acts as the main focus of the conflict between Moordale students and the school administration. The show posits that teaching abstinence and limiting access to information on sex and sexuality only works to further confuse a topic already wrought with misinformation and ignorance and that having an informed professional to speak to about the topic is only ever helpful for teenage development.

In the end, Sex Education continues to do what it does best, focusing on layered and complex characters while never treating them as anything but absolutely human. It further develops previous key players and even cleanly introduces new ones, this is sure to be a satisfying (and, of course, frustrating) watch for fans of the series.