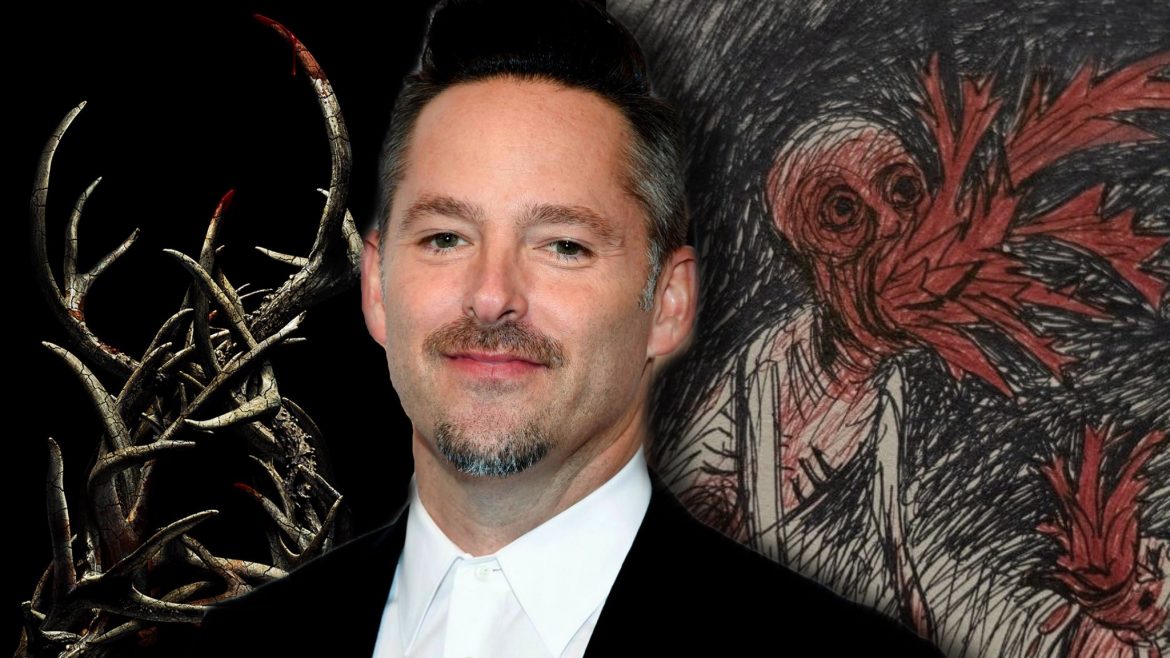 Scott Cooper is the latest filmmaker to be taken under the wing of Guillermo Del Toro. The Mexican-born, Oscar-winning storyteller is just as profound of a producer as he is a director and writer, having ushered in the booming careers of names like J.A. Bayona and Andy Muschietti. Cooper is only just starting to get a taste of this fortune with the long-awaited release of Antlers. Known for helming character-driven, robust genre films, such as Crazy Heart and Out of the Furnace, Cooper gets his first shot at horror here, and hits the target thanks to a helping hand from Del Toro.

A dark atmospheric drama that’s also part creature feature, Antlers is one of the more surprising horror films of the year, partly because of how mature it can feel for a wide studio genre release. Searchlight delayed the film multiple times throughout the pandemic, holding off for a proper theatrical debut, and the final result clearly shows why. Out of all the film’s achievements, the most memorable is perhaps the visualization of the Wendigo – the malevolent, antlered beast fueling this tale. Antlers won’t have trouble winning over horror fans with its bone-chilling aesthetics, and “if that won’t due to the trick, then Cooper and Del Toro’s superb Wendigo design, brought to life through a mix of VFX and practical effects, absolutely will.”

But as Scott Cooper tells us in our exclusive interview, bringing this monster to life was far more complex than what anyone might expect – a suitable task for any Guillermo Del Toro production. A legend dating back to the First Nations, Cooper and Del Toro worked closely with Native experts on how to create something both fresh and honorable to the original folklore. We touch upon this process and more as eager fans finally get to experience Antlers on the big screen just in time for Halloween.

So my first question, I’m curious to know if you used any extra time to refine Antlers with all the delays you’ve faced until now? I’ve asked this before to filmmakers who’ve had projects delayed throughout the pandemic, and the answers always vary.

Scott Cooper: If I had gone back to re-edit the film, I would still be in there. The studio would be very angry, they would have to come to me and say, “pencils down, Scott” because I’m always continuing to refine the film. Eventually, you just have to say to yourself, “Okay, well, this is what I meant to make in this particular time.” And that’s what happened here.

But I’m thankful that the studio lived up to their side of the bargain, waiting for it to be released in cinemas, as opposed to online or streaming because I think horror is best experienced communally. So I did not go back into it because if I did, I’d still be there.

Right, and the timing ideally worked out well, since it’s releasing in time for Halloween and the box office is on the rise.

Scott Cooper: Yeah, I would agree. Although we are surrounded by a lot of great films that are performing well, Bond [No Time To Die], Dune, and Halloween Kills. Hopefully, people will find their way to see Antlers – this smaller kind of film about generational trauma.

I can only imagine what an experience Antlers must have been for you. Your first full dive into horror and to have a master like Guillermo Del Toro at your side through it all? Incredible. Is there something that you took from collaborating with Guillermo that you feel like you’re going to utilize in the rest of your career?

Scott Cooper: He’s just so generous with his time and his ideas. Guillermo feels a little bit like I do, in that you can’t let the audience off the hook, even if you’re dealing with uncomfortable subject matter. But mostly it’s just how he does what great producers do. He’s a great director, clearly, but he allows filmmakers to tell their film. He supports you in ways that only a director knows how to support another director. So that I’ll take forward. It was a really wonderful collaboration.

And knowing Del Toro, I bet he was heavily involved in the actual creation of the monster at the center of your story, the Wendigo.

Scott Cooper: Yes, he was.

So something like the Wendigo, it’s as popular as say vampires or werewolves where anyone can do a quick Google search and see what it has to look like.

So knowing this, how do you make the Wendigo feel unique to your own vision while also still giving an audience something new to look forward to, even though they probably already know what it’s going to look like?

Scott Cooper: Well, if you’re non-Native American or non-First Nations as I am, you go to the experts. I went to Grace Dillon, who is the foremost authority on the Wendigo and teaches it at Portland State University, and is a Native American woman. She told me, “Scott, the Wendigo can manifest itself in many ways, but first and foremost, it’s a spirit.” Then I thought, okay, well, let’s take that as the spirit of lonely places in this small town that I created. And it’s a monster that kind of reflects our own demons, feeds off our worst potential – it’s the pain and misery that lives inside us and comes out eventually. The Wendigo lives everywhere and you can never escape it.

I then went, okay, let’s make this serve as a metaphor for the destruction of our natural resources, and the Native American colonialization by white European settlers. We do that by making the Wendigo feel as though it’s emerged from the Earth’s crust, its mantle. It’s made of iron and ore, and embers fly off it. It’s also a metaphor for how we’re destructing our bodies. Alcoholism, opioid addiction, because I firmly believe that the scariest movies hold up a dark mirror to America’s fear and anxieties. That’s what I hope Antlers does.

Unless my eyes deceived me, it seems that you either used a practical puppet or some kind of animatronic towards the end when you start to reveal more of the monster?

Scott Cooper: Yeah, we built it very practically. It was a very, very large Wendigo, and there was an actor inside who was animating it. So it was largely practical, but then we also used some CG to do things that the actor inside the Wendigo couldn’t do because it’s such a cumbersome, large creature. It’s a combination of practical and CG, but the face you see is that of Lucas’ father, Frank.

Did you push for this more practical approach? You could have easily made the beast all CG because it’s also shrouded in darkness most of the time.

Scott Cooper: The intent was always to use a practical creature, which was built at great expense and great effort, and then augment it with CG when it couldn’t do the things we asked it to do.

The practical presence of the Wendigo is definitely a great surprise for horror fans I think.

Scott Cooper: That’s good! Well, look, most films use all CG, right? I have no interest in that. That’s why I haven’t made one.

Going back to what you brought up earlier, you worked with many consultants on indigenous culture and folklore. You already mentioned Grace Dillon with the Wendigo, but Antlers also touches upon other complex issues as you said. How essential were these outside resources in your creative process? And were there any times where you were heading in one direction and these consultants kind of guided you in another?

Scott Cooper: When you’re dealing with stories that aren’t your own, you always have to work with people who know much more than you do. And certainly, I went to a Native American expert on the Wendigo. She would guide me about things that all felt very real to what the Wendigo was, very real and germane to our story. Very often, I would just take her guidance and craft the story around what she would say.

So at all times, either Grace Dillon or Chris Eyre – who directed Smoke Signals, a great Native American filmmaker – they would help guide me. Just as much as Chris helped me with Hostiles, my film before this one. So it’s always important to listen to people who know more about a subject than yourself, and then you try to tell the story with their guidance. They were incredibly helpful.

I have to bring up Jeremy T. Thomas because he does an incredible job. Child protagonists in horror can easily become like an Achilles heel if the director isn’t in sync with the actor. And in Antlers, Jeremy very much bolsters the film’s dark visual identity and atmosphere. Can you talk about getting that performance right with him?

Scott Cooper: I would not have made this film without Jeremy. I saw 900 young boys around the country, around the world in fact. I didn’t want a child actor. I wanted an actor who could convey the type of trauma that he’s dealing with, about a boy who’s far too young to shoulder the responsibility he’s dealing with. For him, it’s all about duty and self-preservation. He’s the heart and soul of the film, and I wanted him to feel like he was our emotional conduit into the story. Jeremy can say so much non-verbally that I could never write. Without him, Antlers wouldn’t work nearly as effectively. He’s remarkable.

To end us off, why do you think curious moviegoers should check out Antlers in theaters this Halloween season?

Scott Cooper: I think horror films are for people who are interested in the darkness inside themselves, who don’t want to face or confront it directly. Horror films provide a comfortable environment in which to escape. It’s my duty, as a storyteller, to grip you by the throat and not let go, and horror is a great genre in which to do that. I want this story to get under people, burrow under your skin, and stay there for the rest of your life. If you’re into that, go see this film. If not, go see something else.

Antlers is now in theaters!

Our review: Surprisingly Dark and Effective