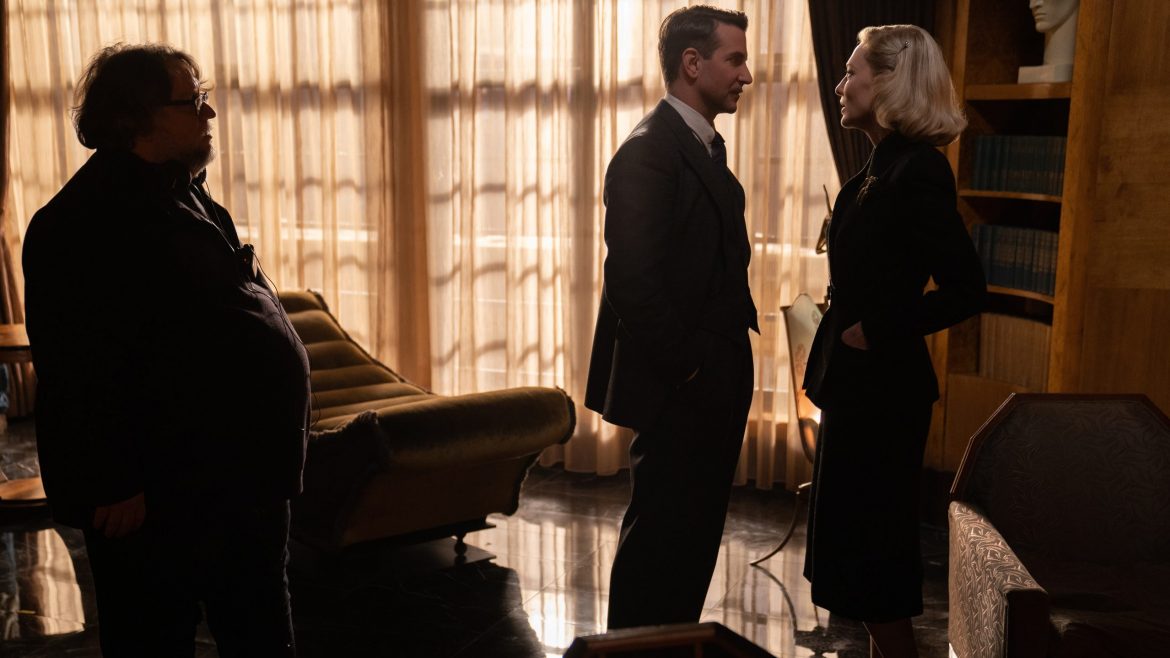 The rise and fall of Stanton Carlisle, Nightmare Alley has been long in the making for famed filmmaker Guillermo Del Toro. But, of course, that’s a tune his fans are used to hearing by now. Many of Del Toro’s beloved works carry their own hefty history to them, full of ups and downs in the development process across many years. Funny enough, Del Toro’s catalog of unrealized projects is notoriously famous in its own right. Nightmare Alley, luckily, has made it to the other side, and the final result “will find no trouble lingering in people’s minds for years to come.”

Actor and long-time collaborator Ron Perlman first suggested adapting William Lindsay Gresham’s 1946 novel to Del Toro on the set of Cronos in 1992, making it now roughly 30 years from concept to completion. At the time, Del Toro couldn’t commit to the project due to studio roadblocks. Fate took its course, as he’s publicly admitted that perhaps he wasn’t ready to tackle such a story at that stage in his career. Approaching the genre of noir is no easy feat, and making it sellable to a wide audience is sometimes even trickier. So just how did he pull it off so effortlessly all these years later? Del Toro explained it himself at the film’s official press conference.

Nightmare Alley follows the exploits of Stanton Carlisle, a blank slate grifter who rises in the ranks of a freak show carnival, soon becoming one of the most prestigious mentalist acts in America. He learns the art of deception, tricking those gullible enough, and willing to pay a pretty penny, that he can contact the great beyond. When he fully buys into his god complex and succumbs to greed, he learns that lies will only get one so far the hard way. Even though set in the 1940s, Del Toro says that, “We wanted to imbue the movie with the anxiety of this time… we wanted not to make a movie about the period, we wanted to make it about now.” And what does now exactly mean to Del Toro? “I think the moment we are in, at a normal basic level, truth and illusion or truth and lies are so dependent on us being gullible and us being capable of being compassionate.”

The societal issues of today need not all be mentioned, but suffice to say, the line between fact and fiction is manipulated and blurred more than often. There has been a rise in people like Stanton Carlisle, those willing to deceive the masses out of personal gain. It’s part of the reason why a story like Nightmare Alley resonates so deeply with today’s moviegoers, despite playing “like a classic noir through and through, possibly the most traditional take audiences have seen in years.” And what’s to learn from Stanton Carlisle? Del Toro states, “in the essential moment we’re in, we have to distinguish narrative through narrative line with reality.”

Although his 11th feature film, Del Toro claims to have invigorated his filmmaking process on Nightmare Alley. Sticking true to his words, the final product seen today is vastly different from what he would have made in the early 90s, had everything gone according to plan. “I’m 57. And every time I learn something new, it is a gift from the heavens,” he says. He actually attributes his methods on the Nightmare Alley set to actor Richard Jenkins, who was nominated for Best Supporting Actor for his turnout in The Shape of Water and plays a more villainous role here. “Richard taught me something beautiful on The Shape of Water,” Del Toro explains. “He said to me, ‘Let me let me try two or three things, see what comes out. If you tell me what you want from the beginning, this is like ordering a fabric in a store and bringing the fabric you you want. But if you let me try it, I’ll bring you the best fabric from every store, and we’ll choose together.'”

Those words from Jenkins Del Toro calls “lesson number one.” Lesson number two comes out of the sheer fact that Del Toro shot no coverage on Nightmare Alley, something that seems hard to believe at first. For those unaware, shooting coverage means getting as much angles and perspectives on a scenes as possible, from wide master shots to close-ups, to supply more to work with in the editing phase. From Del Toro’s own words, “There was for me and evolution. I started shooting everything complete. I didn’t cover, I didn’t do little pieces, because I wanted to see these guys [complete].”

This may not seem as obvious or noticeable to oblivious eyes, yet it should almost lead to a different experience when revisiting the film. Anyone would deem not shooting coverage too risky or foolish, but as Del Toro says, “Why should I cut more when I know exactly where I’m going to cut?” He further details his unorthodox process on Nightmare Alley, “I use the crane like a witness. The camera is almost never high in this movie, almost all the time has the point of view of a child. And it’s always curious, like trying to look over shoulders. I shot characters from behind a lot. The revelations came on the back of characters. I started letting the actors take the proscenium, and I just watched them with the camera very curious, trying to take a look and a new language evolved.”

Nightmare Alley is just as beautiful as any Guillermo Del Toro picture, but he emphasizes that this is achieved by digging deeper. “The key to that is they have not to be done for beauty, but for story and character” he proclaims. By trying out new techniques and evolving his stylistic approach, Del Toro is still able to impress, even after two Oscars this deep into his career. And if Nightmare Alley is any indication, there’s no telling where this noble storyteller will take audiences next year with his stop-motion take on the classic tale of Pinocchio. Guillermo Del Toro isn’t letting age or any other obstacles slow him down that’s for sure.

Nightmare Alley is now in theaters!

Our review: Guillermo Del Toro’s Most Wicked Work Yet