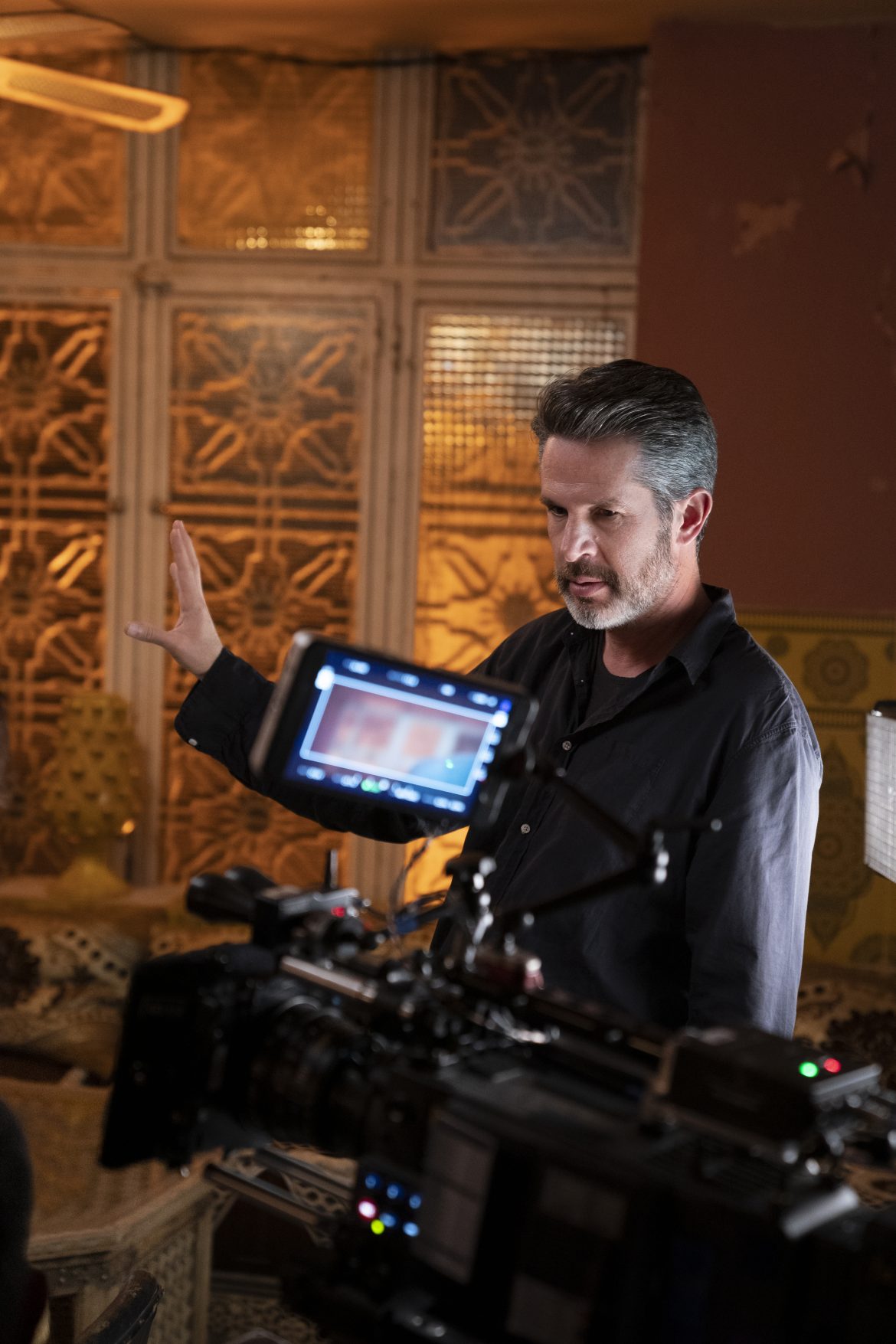 Simon Kinberg first burst onto the Hollywood scene with the clever spy vs. spy flick Mr. & Mrs. Smith, and he’s since proven to be a constant creative presence in the world of blockbuster genre fare. While most know the writer, producer, and now director for his extensive work on Fox’s X-Men franchise, Kinberg has also contributed to the Star Wars universe – having co-created Star Wars Rebels among other things – and produced films from Kenneth Branagh, Ridley Scott, and Neil Blomkamp.

In fact, Genre Films is quite literally the name of Kinberg’s own production company, which is looking at a fresh beginning after years spent almost exclusively with the now-dissolved 20th Century Fox. The start of this new age for the filmmaker is The 355, which swaps out his usual worlds of mutant superheroes, aliens, and robots for a return to the realm of spies and assassins. The film follows an ensemble cast of secret agents – including Jessica Chastain, Lupita Nyong’o, Diane Kruger, and Penélope Cruz – on the hunt for a dangerous, world-ending device. It marks Kinberg’s second time in the director’s chair following 2019’s Dark Phoenix.

We sat down with Simon Kinberg for an exclusive interview and covered the origins of The 355, his collaborative approach to filmmaking, and how genre movies have always remained the kind of stories he likes to tell.

If IMDb is to be believed, you have a ton of upcoming projects. What keeps you motivated to keep putting out so much work and what still excites you after having done so much?

Simon Kinberg: I love stories. I love telling stories, I love hearing stories, I love being part of other people’s stories. So I get excited by all kinds of different stories and in my career – whether they’ve been good movies, bad movies, good shows, bad shows – the product is not where it starts, obviously. Where it starts is, I get inspired or excited about an area or a tone, or character or story and I’m like, “I want to be involved in that. That got me excited or inspired.”

It’s similar to like a big group of friends. They make new friends and they introduce their friends to each other. That’s kind of the way I choose projects. It’s like, “Oh, that person’s interesting, we have a lot in common. They might show me something about myself that I don’t know already.” It’s as simple as that. It’s not a professional motivator or financial motivator. It really is a creative motivator for me. I’m curious about different kinds of stories. When it’s my story, when I’m writing it or if I’m directing it, I would say I like to do things that I feel innovate within a space that is my space, which is the genre space. Whether it’s action, sci-fi, superheroes, spies, I like to try to at least tilt things slightly from where they’ve been.

How did this particular story for The 355 come together with this cast?

Simon Kinberg: This one was pretty simple in some ways. Jessica Chastain and I had worked on a couple of films together. We worked on The Martian and we became really good friends after The Martian. Then, because of that, she said yes to working on my X-Men movie. We were on the set of that and she had this idea of an all-female ensemble spy movie and we took it from there.

We really had a few things in mind that were important to us. One was that it was a global cast and that it was a cast that resembled the world in which we live, which is not a predominantly white, UK, US world. We started thinking of what actresses were our dream actresses to play these parts and truly, Jessica went out and recruited these actresses, and we got them involved before we ever had a script. That’s how the movie came together, then we went with these actresses and myself to the Cannes Film Festival in 2018 and we sold the movie to distributors around the world, including Universal for the US and UK.

Were you interested in doing something a little bit different with this kind of spy action film or did you set out to have more of a classic feel?

Simon Kinberg: I love the classic spy movies. I grew up on James Bond movies, they’re among my favorite. I’d say Bond and Star Wars were like, the most seminal movies for me growing up. But, you know, inherently there’s something original to this and it’s not simply that they’re female because there are other female spy movies, though certainly not as many as there are male.

But the ensemble nature of it is weirdly unique to the spy genre, the only one I can think of in recent times is Ronin and that’s not so recent. Usually you have Bond, Bourne, or Kingsman and it’s really a single protagonist. So I was really excited about doing a team movie in the spy genre. It’s not an easy thing to do and I loved the idea of being able to bring in global perspectives and agendas, and being able to build this little spy family.

Does it feel like you’re going back to your roots in a sense, with Mr. & Mrs. Smith being one of your breakout films?

Simon Kinberg: Yeah, I mean, that was my breakout film. That was the first film I ever wrote that got made, I wrote it when I was in film school. It was 20 years ago now that I wrote that movie. Maybe more than 20 years ago, shockingly. That obviously is a very different movie, because in many ways it’s like a rom-com dressed up as a spy movie. There were moments where I thought of that, but the tones are so different and, obviously, the setup and the stories are so different.

I think what excited me was, between Mr. & Mrs. Smith and The 355, I’ve worked on a lot of material based on other intellectual property – superhero movies, Sherlock Holmes, Cinderella, The Martian. Mr. & Mrs. Smith was a pure original, and The 355 was a pure original. I think that also made me feel like I was going back to my roots of making something that started as an idea in someone’s mind and became a movie.

After so many years of working on big IP-driven projects, what do you bring from all that to a relatively smaller, more grounded film like this?

Simon Kinberg: There’s a lot of things that I’ve learned over the years and I’ve worked on a lot of different scales. Mostly, it’s certainly been the bigger scale like the X-Men movies, but Deadpool was like a $50 million movie. I know that sounds like a tremendous amount of money but it’s a fraction of what a big X-Men movie costs, and it’s around the same as what The 355 costs – both movies punch above their weight class in terms of scope and scale.

The thing I’ve learned the most, and it applies to any size movie, is collaboration. To be open to any idea. You can get great ideas from great actors, you may get a great idea from a PA on set, you can get a great idea anywhere. I know there’s a lot of people that feel like they need to be the author of every idea and ultimately, the director especially, you’re going to be credited as the author anyway. But when I look at a set of 10 people, 15 people, or 500 people, I see a bunch of free ideas. That’s the way I approach all of this. Working on those massive scale films showed me that if you keep your ears open, you’re going to discover some things that you probably wouldn’t have come up with on your own, and that was true for a more intimate movie like this.

What made you want to make the jump to directing with Dark Phoenix and what did you learn from that experience that you were able to apply to The 355?

Simon Kinberg: When I started making movies, directing was not something that I was that interested in. Over time, especially working on the X-Men movies, I felt like even producing wasn’t something I was that interested in. I really just wanted to be a screenwriter. I transitioned into producing very organically because I was doing producorial work as a writer. Then I was doing directorial type work as a writer/producer because I was working really closely with the actors and making some creative decisions with the various heads of departments.

So I just got excited about doing it in an unfiltered way, where it really was my vision. Dark Phoenix was the perfect way to do it, even though obviously, taking on a movie of that scale as your first one was pretty daunting, but that’s a family I knew so well. I knew those actors, they were close and so many of them remain close friends. I adore every single one of them. I felt very safe in that environment. I learned a lot from that first time directing, you learn a lot from the first time you do anything, I mean, the lessons would be too long for this conversation. But I learned a lot beyond just the directing and the editing of the movie, I learned a lot about, you know, the marketing of the movie, I learned a lot about dating and distribution and things that I thought I knew everything about from producing.

When you’re a director, you’re just a little bit more immersed in the marketing process, creatively. So what I learned from Dark Phoenix, that I brought to this, was just to really make sure that there’s no category, department, or aspect of the movie that you take for granted. As a director, because there’s so many people that are working at the same time trying to fulfill your vision, you can take for granted some things. If you don’t keep an eye on as much as you can possibly keep an eye on, you’ll end up with compromised versions of your vision.

The 355 was delayed by nearly an entire year due to the pandemic, were you able to or did you have any desire to go back and tweak the film with that extra time?

Simon Kinberg: It was cut and done and I felt good about it. I felt like it was ready to be seen. But the world wasn’t ready to go to the movies. Certainly a year ago, when we decided to push a full year, I really assumed that COVID would be done. Never in my wildest imagination did I think that we would still be dealing with it, and we’re dealing with it in a different way. Certainly, the cases are very high but with vaccinations, it is different than it was in January of last year, with hospitalizations and all of that. But yeah, I wasn’t tempted. I’ve rewatched it a few times this year with friends, and I’m very proud of the product.