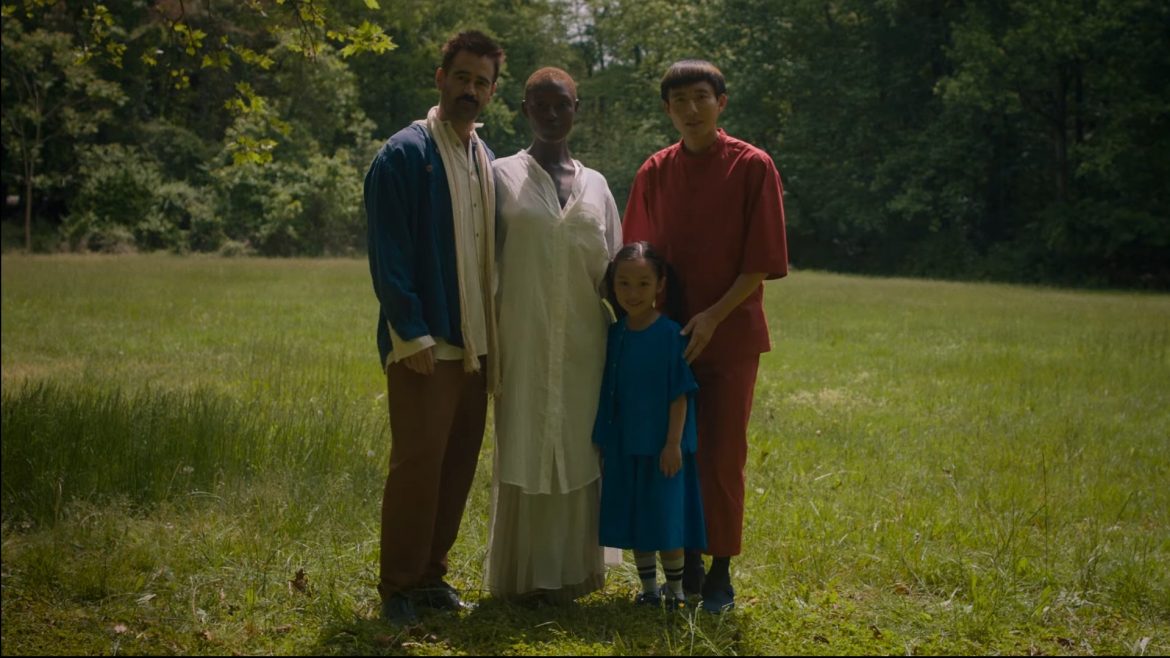 After Yang is a superb, subtle second feature from Kogonada (Columbus). This innovative sci-fi reinvents its relatively well-oiled, albeit trope-driven genre by focusing on the beauty of life and “human” connection. After Yang has been described and advertised as sci-fi, but in truth, it only uses its futuristic setting to explore a new kind of outlook on the world. Audiences shouldn’t go in expecting something like Ex Machina, despite some similar themes. Kogonada’s meditative film is an ever-growing pleasure to watch as the narrative slowly unveils its naturalistic treasures. There is a lingering power to the film, even days after a first viewing, it’s impossible to let go of After Yang.

Sometime in the near future, technology has advanced to the point that artificial intelligence is capable of looking and behaving as close to human as possible. Yang (Justin H. Min), a kind and caring “techno-sapien,” meets his end as his operation systems falter, as all AI seem to have a life span. Yang was bought by Mika’s (Malea Emma Tjandrawidjaja) adoptive parents as a way for her to have a sibling, but also better understand her Chinese heritage. The two are just like brother and sister, so when Yang shuts down, Mika is naturally devastated. Seeing his distraught daughter, Jake (Colin Farrell) sets out to get Yang fixed by anyone who could help. He runs into some mysterious obstacles when consulting techno-sapien experts about Yang, ultimately leading him down an unprecedented path of discovery.

The ever-great Colin Farrell, Justin H. Min, Jodie Turner-Smith, and newcomer Malea Emma Tjandrawidjaja altogether perform as a succinct, stellar family unit. Credit must be given to Kogonada, who guides his performers to deliver his written ideas with such beauty and poeticism. What could have easily slipped out of lesser hands is instead an absorbing experience that brings up many thoughtful questions of life, loss, and memory. It’s the director’s soft, tender touch and every actor’s calming and effortlessly natural screen presence that make After Yang work so well.

One of the best scenes of the film occurs early on as the family attends a worldwide dancing contest, it’s a moment of pure joy, which comes out of absolutely nowhere. Shout out to the film’s stupendous editing here, it’s meticulously timed to the beat of the song at play. Though it is Jake’s discoveries about Yang and his techno-sapien complexion that will stand the test of time. Through illegally-stored memories unveiled in Yang, we realize that he is a sentient being with the capacity to feel and experience sensations that are, supposedly, uniquely human. The pairing visuals are lyrically in tune. The message that emotional connection transcends all else, human or not, is all the more beautiful.

Kogonada’s sophomore feature is a simplistic yet elegant technical feat to behold. Mandy cinematographer Benjamin Loeb, in an interview with IndieWire, described the process of making After Yang to “the conception of a good ramen broth.” This brilliantly describes the multi-faceted nature of the film’s visual language. Loeb plays with varying lenses to emphasize the shifts in perspective, whether it be through a futuristic phone call or a visualized memory. As aforementioned, the film is technically sci-fi, but it has no interest in harnessing traditional lighting setups, shots, or anything else conventional from the genre.

However, a handful of driving scenes go through a certain tunnel that is lined with a beautiful array of green-ish lights that wonderfully obscure our character’s faces, which is probably the closest After Yang gets to evoking any sense of true, traditional sci-fi. Alternatively, the film finds its own, simplistic aesthetic as it speeds by. From prioritizing realistic tones to delicate framing, these cinematic choices are defining factors in making the film stand above all else as you couldn’t possibly imagine After Yang without Loeb’s contributions.

The most vivid and innovative aspect of After Yang, that all who watch will remember, is the film’s commentary and visualization on memories. Using the limited resources at hand, the film’s VFX team devise an extremely immersive, VR-like way of experiencing the memories on show. The VFX lens which we see them through comes across as real, it feels like Farrell is actually seeing these fading visuals through his own perspective, it is very humane. Additionally, Kogonada’s decision to shift to an expanded aspect ratio is a genius touch that is completely immersive, although it could be a blink and you miss it moment for less savvy eyes.

After Yang’s examination of loss, memory, and existence is deftly handled. It’s one of the most gorgeous films of recent memory. One could argue that Turner-Smith would benefit from more screen time, but apart from that, After Yang is a masterpiece, seriously. This is a must-see whenever, or however, A24 plans to release it. We’ll hopefully be hearing lots more of After Yang as the year goes by, as it seriously deserves to be kept in the awards conversation for Kogonada and his all-around brilliance.

After Yang debuts March 4 in theaters and Showtime