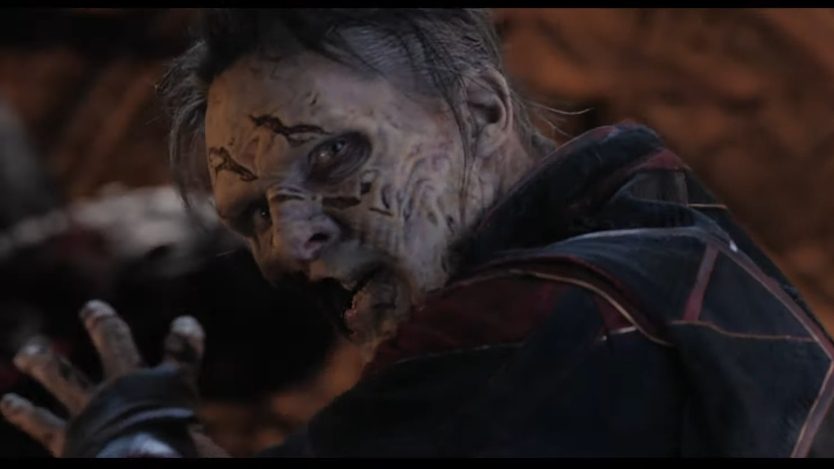 Doctor Strange in the Multiverse of Madness is many things all at once; a sequel to the first Doctor Strange film obviously, a follow-up to WandaVision, and as the title suggests, the next step chapter of the Marvel Cinematic Universe’s journey into the multiverse. But above all else, legendary filmmaker Sam Raimi guides the MCU into the realm of horror for the very first time. There have been instances of horror in the MCU before, some of that more recently in Moon Knight on Disney+, but Raimi’s instincts truly take Marvel to new territory. “Even his most devoted followers will be shocked to see how much he was able to get away with.”

When asked during the film’s official press conference, Sam Raimi detailed how working on the Doctor Strange sequel was quite a different experience from when he made his renowned Spider-Man Trilogy. Of course, Raimi came on board the film after Scott Derrickson left the project in early 2020. The nature of coming onto a pre-existing production proved to be more spontaneous than the director was used to. “The script was constantly changing,” Raimi says. But this was meant with no negativity, for the director then proclaimed that “it was a very lively process.”

The liveliness Sam Raimi referred to was the interconnected aspect of the script, per usual in the MCU. Back when Raimi established a high bar with Spider-Man in the 2000s, shared universes were but a fool’s dream. Now, he makes his return to the very genre he helped build from the ground up in the 26th installment of the world’s biggest franchise. “The other movies that we had storylines from, some were being made concurrently or had just finished. Like WandaVision had just finished or Spider-Man: No Way Home was also shooting. And our movie referenced those films.”

Now common Marvel practice, Raimi was allowed to skim his eyes over those projects in order to push Doctor Strange in the Multiverse of Madness to where it needed to go… and have it make sense at the same time. “We had to have meetings with [Jon Watts] saying what does Doctor Strange know by the end of No Way Home? Does he even remember the multiverse? I mean, we had plenty of questions that Michael [Waldron] had to take into the script at the moment.” Raimi then explained that whenever relevant projects like No Way Home or even WandaVision made pivotal changes, their script would “take their changes and that change rippled through our movie.”

Raimi has spent the last decade or so producing rising filmmakers under his Ghost House Pictures label, with his last directorial feature being Oz the Great and Powerful in 2013. Still, this flexible process of making a Marvel blockbuster has seemingly reinvigorated him to a degree. “You know, it’s probably for a writer like improv is for an actor. These movies are reacting, making up, changing things, and you have to be in the moment and take it in and go with it.” And in true Raimi style, he went along with those changes by finding more and more ways to infuse his taste for horror.

“When Kevin [Feige] announced that this movie would be the first entry putting their toes into the world of horror, I was thrilled that he called me to come in,” Raimi said enthusiastically. When describing how he implemented horror into the MCU while still keeping it as a multiversal adventure, Sam Raimi went back to his own roots. “I was able to take those horror films that I made in my youth and what I had learned from them, building suspense sequences, titillating the audience, am I gonna give them the scare now? No… [pause] Now, I’m gonna give it to them!”

It’s safe to say that Doctor Strange in the Multiverse of Madness has its own fair share of jumpscares. “That’s the stuff I was able to apply in the spooky sequences in this film. So, it was very helpful.” This is mostly seen with Wanda Maximoff aka the Scarlet Witch. “Raimi gives Elizabeth Olsen the chance at every corner to make the Scarlet Witch actually horrifying, and she does wonders.” The success of this film will surely lead to more horror exploration in the MCU, and fans will yet again have no one else to thank but the legend Sam Raimi himself.