Home » ‘House of the Dragon’ Review – Reclaiming the Throne
TV

‘House of the Dragon’ Review – Reclaiming the Throne 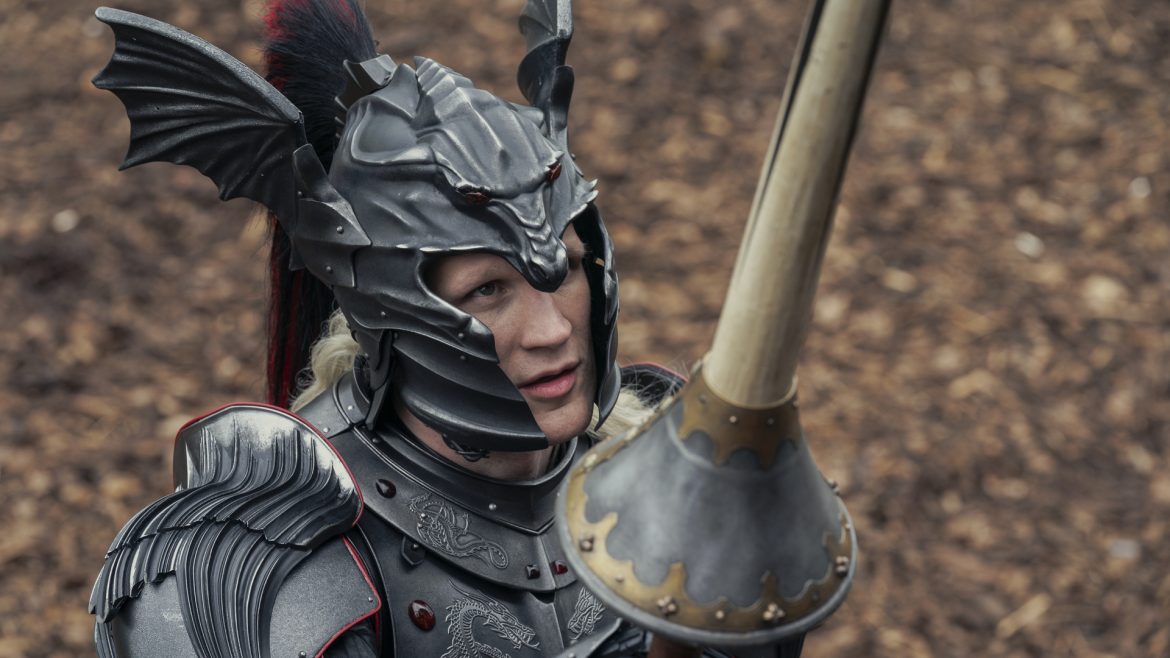 Where were you when Game of Thrones ended? Likely, you were one of the record-breaking 19.3 million viewers staring at their screen in disbelief, asking yourself: Did that just happen? After the initial shock wore off you were probably one of two things, either angry or resigned. If the petition to remake the final season that garnered 1.8 million signatures is anything to go by, most long-time Game of Thrones fans were quite upset by the story’s unsatisfactory and rushed conclusion. If you were a book reader, doubly so. It’s a bit inconceivable that in just a single episode of television, the most popular show in the world could take such a fall from the public’s grace. Even if the writing quality (or lack thereof) had been on the wall for a long time, no one could have predicted that the series finale would result in such an unprecedented, unilateral loss of interest. Now nearly three years and one failed pilot later, HBO is hoping that they can reel their once most fervent fanbase back into the Game with House of the Dragon.

In perhaps their smartest move, they’ve done away with the disastrous writing duo of David Benioff and D.B. Weiss, and replaced them with Ryan Condal and Miguel Sapochnik as showrunners. Sapochnik, in particular, was hired due to having been responsible for some of the previous show’s most talked about episodes (Hardhome, Battle of the Bastards, The Winds of Winter, etc.). Together they’ve been tasked with adapting ‘The Dying of the Dragons’ chapters from George R. R. Martin’s Targaryen history novel, Fire & Blood, and re-establishing Westeros in the mainstream’s consciousness. However, The North Remembers, and while House of the Dragon might be off to an auspicious start, will this be enough for skeptical audiences to return?

That depends entirely on what attracted them to the original series. If you came for the over-the-top spectacle or the jaw-dropping betrayals, such as in the Red Wedding or the opening minutes of The Winds of Winter, you may find yourself disappointed with the first six episodes of House of the Dragon. If you became a fan because of the way Game of Thrones was firmly rooted in George R.R. Martin’s novels in its earlier seasons, with its clever character work, then you may be more amenable to this series. With House of the Dragon, the showrunners have gone back to what made Game of Thrones an initial success. Westeros feels similar to the viewer but ever so slightly different. The costuming is reminiscent of an earlier era, and the cinematography noticeably takes on a warmer tone than we’ve previously seen. Some set pieces are also re-used, such as the Iron Throne, however, they’re tweaked just enough for you to know we’re not in the same Westeros as before.

The show’s greatest strength is that it takes its time laying the story’s foundation properly and methodically episode by episode. The writers do a lot of necessary legwork in the first few to ease us back into the world and establish the contentious relationships between the main players right from the start. 172 years before Daenerys Targaryen is born, the precedent is set that no woman can inherit the throne over male heirs. This ruling leads to the affable, yet ineffectual Viserys I (Paddy Considine) being crowned king over his cousin Rhaenys (Eve Best), the Queen Who Never Was. Unfortunately for Viserys, the issue of succession would rear its head during his reign as well. Having no sons and no viable male heirs, at the behest of Otto Hightower (Rhys Ifans), he breaks precedent and names his daughter Rhaenyra (Milly Alcock) his heir. This is something that causes strife not only with the lords of Westeros but with his former heir apparent and younger brother Prince Daemon Targaryen (Matt Smith).

Over the course of this first season, the tension between these fractious families builds ever so slowly until suddenly, at the midway point, the cracks widen into a clear divide between each side and the Valyrian steel daggers come out. The writers have realized exactly where, and more importantly, why the later seasons of Game of Thrones declined in quality. It was never about last-minute twists that the series became so ubiquitous for, but rather it has always been about the narrative and the compelling characters that sustained it. Make no mistake, audiences may come to House of the Dragon for the dragons, though what will undoubtedly keep them watching are the complex players of the Game. Matt Smith will be a particular highlight among fans, as he plays the devilish “Rogue Prince” in such a way that he steals nearly every scene he’s in with his biting, often humorous dialogue. Similarly, Steve Toussaint as Corlys Velaryon brings a dignified gravitas to the role and Eve Best as his wife, Rhaenys, is the perfect match; she easily commands every scene she has extended dialogue in.

While the first half of the season is indeed good, House of the Dragon only really comes into its own once the stakes have been properly established and the plot jumps forward 10 years. It is here, when the older actors step into their roles, that the show begins to feel like when Game of Thrones was at its best. The ugliness of the rivalry between Rhaenyra (Emma D’Arcy) and Alicent’s (Olivia Cooke) families takes center stage, and every move made feels calculated. The court itself has taken sides and the atmosphere within the Red Keep begins to feel dangerous and inhospitable – the promise of violence ever-present. And there will be violence. As the old king, Viserys has started to wither, the court sycophants have started to make their ambitions known. By the end of episode six, it can be said with certainty that we’ll all be eagerly awaiting the subsequent episodes each Sunday as the blood begins to spill in earnest.

To book readers: knowing the history in Fire & Blood is only knowing half the story. As is often the case, history is written by the victors. The truth of what actually happened is often skewed to one side or lost altogether. House of the Dragon endeavors to flesh out the details, sometimes taking conflicting accounts of the same event and making a singular truth out of it. Where George R.R. Martin was vague in the recounting of an event, the writers here might decide to create a more explicit portrayal. No doubt some avid A Song of Ice and Fire readers will be upset by this, especially in how the main driving force of the conflict, the rivalry between Rhaenyra and Alicent, is created. Alicent is portrayed in a much more flattering light than what most fans would have once believed based on reading the book alone. To the show’s credit, these deviations do make for a more nuanced and engaging dynamic between those two characters, even if they do no favors for Rhaenyra herself.

The team behind House of the Dragon has done what was once thought unthinkable after the final season of Game of Thrones. Condal and Sapochnik have created a Westeros that is rich and vibrant, firmly placing it within a different period, while also making it feel like the very best of the original series. House of the Dragon is very clearly made with care, by people who not only are deeply knowledgeable about George R.R. Martin’s stories and lore, but deeply love them as well. It will be difficult for even the most spurned among fans to not fall back into this world. Time will tell if the new showrunners will manage to stick the eventual landing, though as it stands now, they’re off to an excellent start. May fire reign.

House of the Dragon premieres on HBO August 21!