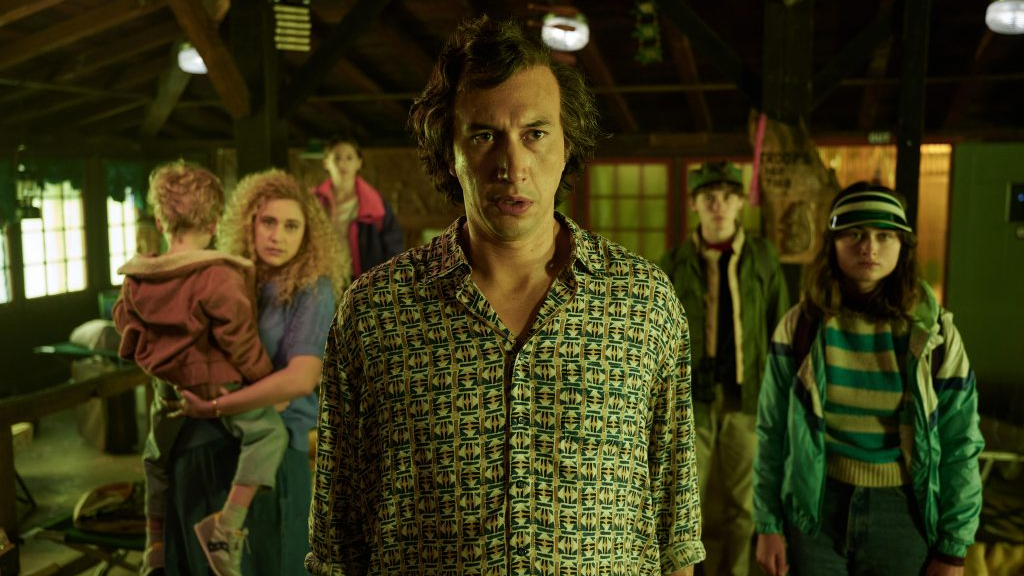 Noah Baumbach’s latest project is an all too faithful adaptation of author Don DeLillo’s novel White Noise from 1985, which is often cited as one of the first pieces of postmodern literature. The story is set in the ’80s and we follow a professor of Hitler studies named Jack Gladney (Adam Driver), his fourth wife Babette (Greta Gerwig), and their family of four children; Denise, Heinrich, Steffie, and Wilder. The happy family lives in a suburban town where everything seems eerily idyllic. That image soon comes crashing down following a toxic explosion that causes the Gladneys to evacuate with the rest of the unknowing townsfolk.

White Noise sees Noah Baumbach and collaborator/wife Greta Gerwig reunite after pursuing separate creative avenues. Despite having only written and directed two features, Lady Bird and Little Women, Gerwig’s influence on the industry is undeniable and she has three Oscar nominations to show for it. However, White Noise marks her first on-screen acting role in six years. While it is enthralling to see Gerwig back in front of the camera (not to mention with a fantastic ’80s look), this particular role is written in a theatrical manner that hinders her ability to deliver a natural and faceted performance. This may not be the acting return many fans were hoping for.

Going further, every character within White Noise feels two-dimensional and lacks the human depth that Noah Baumbach has become known for in his scripts. In films like Marriage Story and The Squid And The Whale, you’ll often find yourself empathizing with the roughest or most imperfect characters because of their realness. The majority of the cast in White Noise lacks the necessary charisma, with the slight exception of Don Cheadle’s character Professor Murray. It’s not hard to see where Baumbach placed all the wrong bets, and it mostly comes down to adaptation.

The events of White Noise are essentially split into two core narratives that happen to the same group of individuals, but never concurrently. The first is what is known as “The Airborne Toxic Event,” a disaster-type situation that leads to the best, yet fleeting moments of intensity within the film before switching its tone rather jarringly. This other half is a plot line revolving around a mystery pill that Gerwig’s Babette has been taking, resulting in some mild side effects. White Noise could have been exponentially stronger if Baumbach honed in on the dual fear of demise between Adam Driver and Greta Gerwig’s married couple, whether that be literally or more metaphorically across both plots.

In his director’s statement for the Venice Film Festival, Noah Baumbach notes that he first read Don DeLillo’s novel during his time at college in the late 1980s, saying that “it captured perfectly the absurdity, horror, and madness of America at the time.” Although, one of the biggest issues with this film is an overreliance on absurdity when tieing mismatched plot lines together. Without the excuse of the narrative being abstract and intentionally ridiculous, there are essentially two entirely different films rigidly merged into one with only a weak motif connecting them. The only time this absurdity truly works in the film’s favor is during its playful ending and credits sequence, but it’s far too late by then.

White Noise, unfortunately, quickly dissipates into a poor mix of heavy dialogue and funky costumes. The stylistic choices are what ultimately stands out against a narrative that falls flat. Considering the plot revolves around massive questions of existentially, the stakes consistently feel low. A recurring theme is the family’s fear of death and losing each other, but their terror lacks authenticity as Greta Gerwig and Adam Driver’s chemistry is nowhere near strong enough to warrant the way in which the final act plays out. A film that focuses so heavily on the fear of death should have the ability to Ieave the audience ruminating on their own mortality, yet it is handled in such a trivial way here that you walk out feeling vacant and unchanged in any way.

Perhaps White Noise will greatly benefit from its streaming release on Netflix, where audiences will have the ability to further explore its dense themes with repeated viewings. The point still stands though, after a first watch, White Noise does not come together in the way a cohesive film should. Of course, this also boils down to the infamous source material. Noah Baumbach’s film is generally faithful to a novel that has been labeled as almost impossible to adapt thanks to its density. The screenwriting process could have been the opportunity to fill in the gaps for a more singular viewing experience, one that could have paved its own identity adjacent to the original novel without major issues. If anything, White Noise shows that being overtly faithful to a pre-existing source from another medium can fundamentally lead to a film’s downfall. Films still need to work as such too!