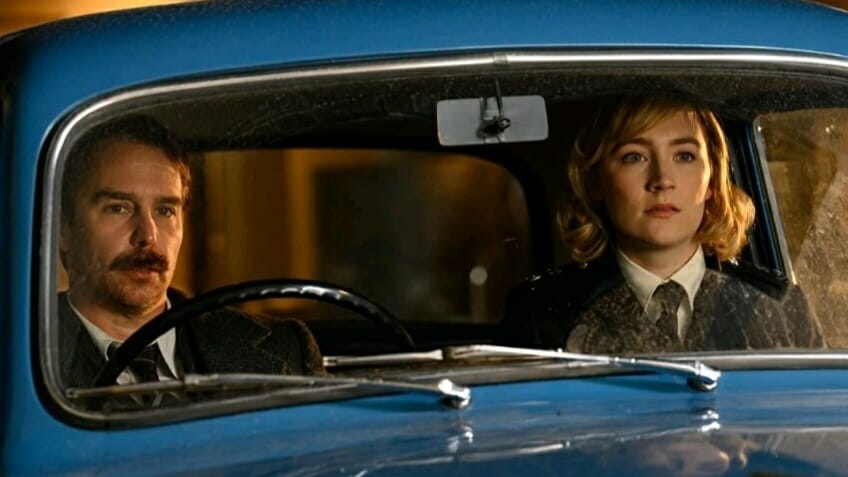 The mass popularity of the comedic murder mystery is on the uptick, following the huge commerical success of Knives Out which has led to a cultural resurgence of the genre, and See How They Run aims to be the latest original title to ride this wave. Tom George’s feature film debut is an investigation into the murder of a crew member for the film adaptation of Agatha Christie’s The Mousetrap. The notable American crew members visit the play on the West End to celebrate a milestone performance when someone at the afterparty gets whacked. It’s up to the exhausted and exasperated Inspector Stoppard (Sam Rockwell) and plucky Constable Stalker (Saoirse Ronan) to catch the murderer within the colorful ensemble cast, including industry veterans such as David Oyelowo, Ruth Wilson and Adrien Brody and vibrant up-and-coming stars such as the likes of Harris Dickinson.

See How They Run is an enjoyable movie to watch, but not perhaps to sit through. The set design is sleek, the cinematography is distinct and sharp. The film certainly has enough style to remain visually interesting and captivating. The dialogue, too, is quick and witty. There are a few fourth wall breaks and many meta callouts, though they all aid the tone rather than distract from the story. Yet, tone cannot solely sustain See How They Run when the pacing leaves much to be desired. Since its visuals on display are stylistically precise, the script should follow suit. And, unfortunately, it drags a lot, especially in the second act. The mystery unravels slowly, but it’s quite difficult to get invested until the midway point.

Some of these pacing issues stem from the fact that character development, and pivotal moments, come at the wrong time. Mysteries thrive off intrigue, and See How They Run is sadly less about what the audience doesn’t know yet and more about what the audience wants to know. This especially applies to Sam Rockwell and Saoirse Ronan’s main two detectives since they are the film’s driving force and the audience’s vehicle for empathy. They’re easy to watch and follow, however, it takes too long to actually care for them.

Saoirse Ronan is the clear standout. Her bright attitude, stellar delivery, and nuanced performance effortlessly carry the entire viewing experience. She is a natural and just a joy to watch. Sam Rockwell, while usually masterful in the role of the pathetic-but-in-a-funny-way male lead, doesn’t deliver his usual charisma. It seems, like his character, that only half of his heart is in it. This is ironically the most apparent fault in See How They Run, the film would have received a significant boost had he matched the commitment of his co-star. Nevertheless, the back and forth between the two leads throughout is a good anchor and the contrast between their personalities infuses a natural comedy.

The mystery itself is more entertaining than it is satisfying. For devout fans of the genre, this may be a letdown, but for those who don’t mind being a passive viewer in an unfolding mystery, it works. The supporting cast members are all good in their performances. While the list of suspects is long, only a few of them get looked into closely as the severity of motives is unbalanced. Although, the investigation into those who seem the most culpable is well done and among the more captivating scenes. See How They Run is very aware of how it differs from a traditional murder mystery. Even so, these subversions do little to actually enhance the quality of the narrative – they rather simply set this film apart from its contemporaries.

See How They Run is a fun murder mystery that could have been more cunning in allocating its resources within the runtime. It would be a good watch for those who enjoy the familiar style of visually clean and distinct quirky comedies, or just Saoirse Ronan. Fans of the murder mystery may find it underwhelming as it deviates from the traditional structure, but it should work for general audiences. It’s an enjoyable and twisty ride if you’re willing to see it through.

See How They Run releases in theaters September 16!