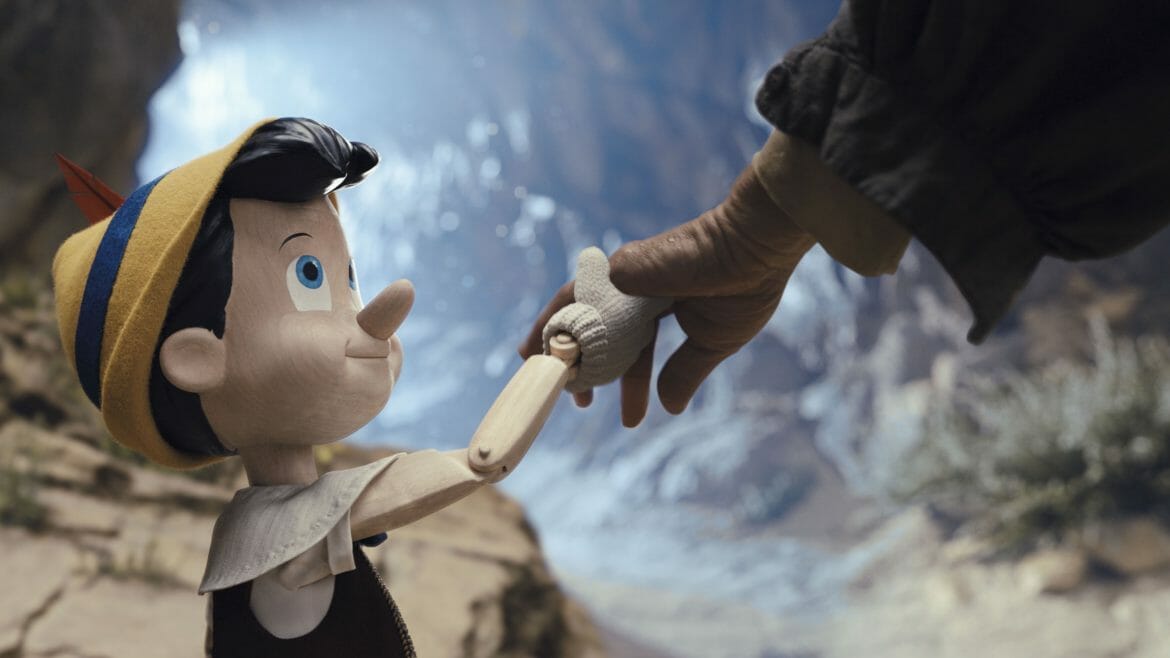 Over the past decade, renowned filmmaker Robert Zemeckis has been on an increasingly unusual streak. When people talk about Zemeckis nowadays they aren’t so much referencing his classics like Back to the Future or Forrest Gump as they are distracted by his current reliance on shoddy CGI, just look at The Witches or even Welcome to Marwen. However, the director tends to get somewhat of a pass because of his pioneer status. His latest is a live-action/CGI hybrid adaptation of the Disney household name Pinocchio. There is a high chance that viewers will be split on this simple yet adventurous Disney+ original. Some may see it as nothing more than another cheap remake, while others may appreciate its lighthearted, familiar touch.

One night as the reclusive clockmaker Geppetto (Tom Hanks) goes to bed, he notices a wishing star in the night sky and proceeds to ask for a miracle. Unknown to the clockmaker, his cries are heard as Pinocchio (Benjamin Evan Ainsworth), the marionette he just finished, comes to life. The wooden boy has dreams of becoming real and does everything he can to please his newfound father, but it’s not until Pinocchio is joined by his assigned temporary conscience in Jiminy Cricket (Joseph Gordon-Levitt) that he is taken down an endless path of meandering adventures.

From the very beginning, it is evident that Robert Zemeckis’ Pinocchio is clearly a picture tailored just for children, which is not necessarily a bad thing always. However, the filmmaker is up to his usual visual effects trickery, making the movie instantly recognizable as his, for better or worse. Even though the special effects are surprisingly quite impressive at times here, it feels like Pinocchio spends more time trying to impress its target young audience with silky visuals rather than focusing on making a good movie – almost like lazily waving a toy in front of a child. One is never fully transported to the mystical world of author Carlo Collodi’s original tales, as before anything truly meaningful happens, the film zips off in another direction. This is all despite the fact that the well-known story of Pinocchio is fairly straightforward.

The film opens with Levitt’s happy-go-lucky, yet down on his luck CGI cricket wandering down a dingy street, setting the tone for what’s to come with back-and-forth narration. It is often funny and joyful, but with the subtle and darker hints of Oliver Twist. Key figures of mischief and deception come to warp the young and naïve Pinocchio as he sets out to become a real boy. The best aspect of the film undoubtedly comes from Joseph Gordon-Levitt’s Jiminy Cricket, he really does sell the iconic character with his spirited vocal performance. It’s hard not to at least enjoy his screen presence each time he comes to save Pinocchio from being corrupted.

Everyone else in the cast does a fine job, including Benjamin Evan Ainsworth who nails the voice of Pinocchio. The young star is most known from Netflix’s The Haunting of Bly Manor and was even just briefly seen on The Sandman. His lively turnout as Pinocchio further proves his range and none of the film’s faults lie on him. The two weak links are actually the only prominent live-action actors, Tom Hanks and Cynthia Erivo. In the pivotal role of Geppetto, Hanks is not able to convincingly act side-by-side with his animated co-stars. Playing off a tennis ball or CGI stand-in may be a tough act, but given his vast portfolio, this role seems like it was just a walk in the park for Mr. Hanks. Likewise, Cynthia Erivo’s short-lived appearance as the Blue Fairy does little to impress.

While the dedication to the classic Pinocchio story is admirable, one can’t help but feel like this project was one big waste of potential. There is nothing really atrocious here, it’s all just so bland with little depth. The moral of it all is spelled out in such a boring manner that the film leaves the audience with nothing to ponder upon. Once Pinocchio is over, it is over and there isn’t much to think about again. Praise must be given to the teams who, clearly, worked tirelessly to bring Pinocchio and his CGI acquaintances to life with some often satisfying visual effects. The film’s visuals usually look great, in spite of being slightly weird side-by-side with the likes of Tom Hanks’ Geppetto. This is not the last of Pinocchio moviegoers will see this year as Guillermo del Toro’s stop-motion adaptation releases this December. Let’s see which of the two people will walk away from actually remembering the most.

Pinocchio is now streaming on Disney+