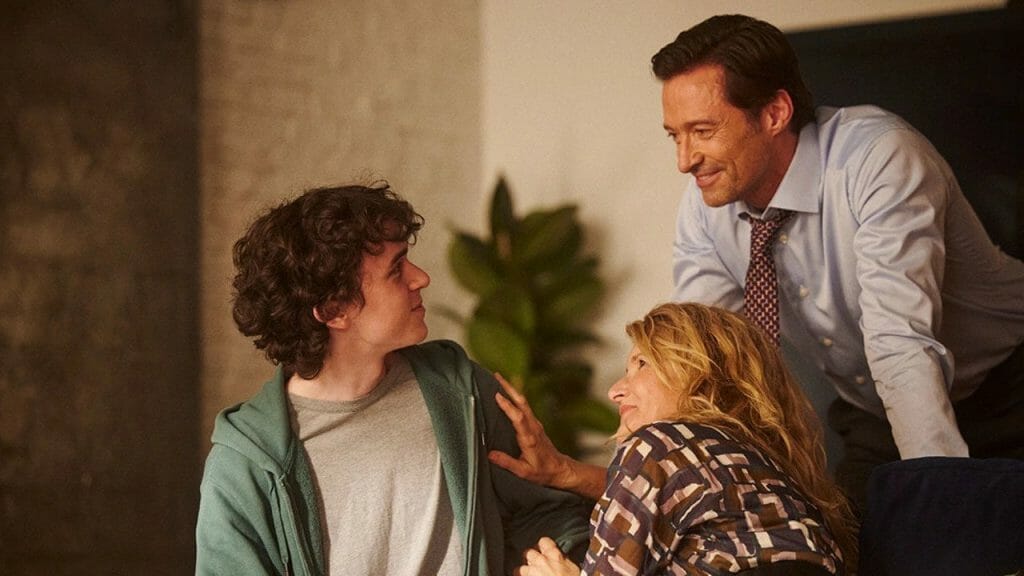 French playwright Florian Zeller made his directorial debut in 2020 with The Father, winning an academy award for himself in Best Adapted Screenplay and the prestigious Best Actor oscar going to Sir Anthony Hopkins for his heartwrenching turnout. The film was the first adaptation of his trifecta of familial named stage plays that also include The Mother and The Son. The latter is now Zeller’s sophomore endeavor starring Hollywood royalty with Hugh Jackman and Laura Dern. Rising powerhouse Vanessa Kirby and newcomer Zen McGrath round up the main cast, which you would think paves the way for another stellar adaptation. Unfortunately, that is somehow not the case here.

The play itself is the most recent in Zeller’s spiritual trilogy that homes in on challenging experiences within different age groups. Whereas The Father revolves around the peril of dementia and The Mother, which is yet to be greenlit for a film adaptation, focuses on the loneliness of middle-aged life, The Son explores the convolution of adolescence and its links to mental health. In one way or another, Zeller’s works keep a singular character at their core. The supporting roles are still crucial but they all revolve around the crumbling world of the titular lead.

Zen McGrath plays Nicholas, a seventeen-year-old child of divorce. When his mother, Kate (Laura Dern), struggles to connect with Nicholas after he secretly avoids school for a month as a result of declining mental health, he asks to live with his father Peter (Hugh Jackman), who is also joined by his new wife Beth (Vanessa Kirby) and their infant son Theo. Thinking that a change of scenery would “cure” his rampant depression turns out to be more misguided than Nicholas could expect, as now his father starts to struggle with coming to terms with their disconnected relationship.

The Son is linear in its structure for the majority of its drawn out, two-hour runtime, playing heavily into the tropes of familial dramas. The fundamental story at hand is strong in its relatability, especially for teenagers – former or present – and their parents who are unintentionally left to grapple with their children’s sorrows and consequently, their own. In this way, The Son is very good at finding truth in the modern mental health epidemic and gives commentary on how, woefully, even love is not able to aid the internal agony of depression.

On the other hand, the dialogue in this script is more often than not written in an unnatural fashion that feels stiff. A tale so socially relevant about mental health should be able to make you ponder on conversations you’ve had with others just from the power of the dialogue and character interactions, yet this feels painfully artificial and draws you out almost every single time. It’s hard to imagine how this could be the case when The Father was so powerful in terms of what was on paper, but it seems like Florian Zeller is trying too hard to get the point across in The Son instead of letting things speak for themselves.

The rough dialogue has a direct effect on the actors. Zen McGrath is seemingly always on the edge of a perpetual monologue, leaving his overall performance feeling forced. Shockingly, Hugh Jackman and Laura Dern also lack the intense passion necessary to emotionally sell this story. Vanessa Kirby is the clear standout, dealing with her character’s shifting mindset with dexterity. The platonic chemistry in the cast grows stronger as time goes on, but it’s still not profound enough by the end. Anthony Hopkins makes a fleeting appearance in what is undoubtedly the strongest scene of the entire film, where Peter reunites with his own father, providing some much-needed context on his own nature as a parent and a son.

There are other compelling moments found in The Son, one seeing Hugh Jackman take on a fun dance sequence. However, this necessary levity is frustratingly interrupted when the scene changes in both tone and pace frantically. It is also difficult to gauge how many months the plot spans across, which is especially jarring when a character’s declining condition correlates with the progression of time. Being unable to track this process holds The Son back from adding another layer of emotion as you never really feel like you’re seeing characters grow despite what happens on-screen.

Coming hot off the heels of The Father was always going to be a momentous task, and because of the similar storytelling techniques seen in The Son, it is hard not to compare the two in any capacity. Florian Zeller’s second feature lacks the psychological depth that its predecessor wholeheartedly possesses and is far more surface-level, something that would not have been such a pressing issue if the dialogue and performances were able to make up for it. At the end of the day, even though much of the source material resonates on a human level, a film is only as good as its execution, which in this case is disappointingly insufficient.

The Son premiered at the 2022 Venice Film Festival. The film releases in theaters November 11!