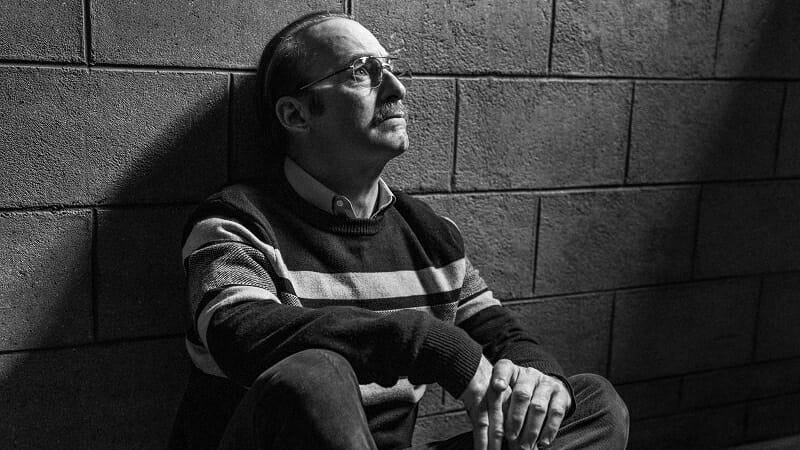 In Breaking Bad, Vince Gilligan and Peter Gould gave a distinct message about a person’s path if they lose all sense of morality. With Better Call Saul, we’re treated to an intense look at a man who constantly teeters the line between moral and immoral. Saul Goodman (Bob Odenkirk), known in a previous life as Jimmy McGill, started out wanting to do the right thing. Saved by his brother Chuck McGill (Michael McKean) from prison in his young adult life, Jimmy tried to move on from his con-man days.

However, familial trauma and bitter resentment between the two brothers led Jimmy down the path of using his law degree for criminal enterprises. Better Call Saul takes its time taking Jimmy to that point in his life, with the show jumping between three different periods and three different identities. There’s Jimmy McGill, the man struggling to do the right thing; Saul Goodman, a criminal lawyer who helped Heisenberg build his meth empire; and Gene Takovic, a fugitive on the run posing as a manager of a Cinnabon in Omaha.

Better Call Saul uses the passing of time to provide us with raw and sobering looks at the life of Jimmy/Saul/Gene. That’s never more evident than in the series finale, aptly titled Saul Gone. Written and directed by the man who created the character, Peter Gould crafts a riveting, Charles Dickens-Esque passage through time to reflect on the life and regrets of one James McGill. The Time machine motif used in Saul Gone is brilliant, giving us one of the best episodes in what some like to call the “Gilliverse” (which consists of Breaking Bad, El Camino: A Breaking Bad Movie, and of course, Better Call Saul).

The series finale speaks to the larger accomplishments of Better Call Saul as a whole. The narrative structure, characters, and story all could have ridden on the coattails of Breaking Bad, now considered one of the most iconic shows of all time. Instead, Better Call Saul took its own path, crafting a different tale where morality wins in the end. Look no further for an example of this than Saul Gone, and what could be considered the grand finale of the Gilliverse.

Saul Gone is mostly in black-and-white, reinforcing that we’re at the end of the road. Gene’s real identity has been revealed, causing him to return to his Saul Goodman ways. It’s almost frightening to see the return of Saul Goodman in such dramatic fashion, and Odenkrik’s chilling performance as the reinvigorated criminal lawyer reminds us how dangerous this man can be.

It’s as if Saul Gone knows this will be the last time we see all these fan-favorite characters. Better Call Saul has a fundamental understanding of fan service, honoring what came before in Breaking Bad and giving a sense of purpose to all the nods and references.

Every re-appearance, from Bryan Cranston as Walter White to Jonathan Banks as Mike Ermantrauht, gives us one last anecdote about our favorite characters while also adding to the journey through time and regret that Jimmy McGill undergos as he approaches his trial. As mentioned earlier, Saul Gone plays out like Charles Dickens’s A Christmas Carol, with the three ghosts coming in the form of Mike, Walter, and Jimmy’s brother Chuck.

Throughout Saul Gone, Jimmy asks characters like Mike and Walter what they would change if they had a time machine. It’s a playful thought experiment meant to help Jimmy go through the introspection he needs to find his way to redemption, justifying the fun, yet effective Breaking Bad cameos at the same time.

Mike responds earnestly, expressing his genuine regret for taking the path down to criminality. Walter, being the arrogant jerk he is, dismisses the question and forces Saul to talk about his regrets. Saul answers them both superficially and jokingly, with Walter stating that Saul “has always been like this.” That being, a con-man that’s looking for another score no matter what.

All three flashbacks weigh heavily on Jimmy’s mind as he approaches his trial date and realizes one of the few people left alive that he cares about, Kim Wexler (Rhea Seehorn), may be caught in the crossfire of the trial of Saul Goodman. The flashbacks serve as a warning for Jimmy, letting him know in a way that it’s not too late to change his path.

And this is where Better Call Saul succeeds the most and uses its place in the timeline as a prequel narrative to its benefit. Viewers who have seen Breaking Bad know what the six seasons of this series have led to. Peter Gould and the rest of the writing team prey on our fears and dread of where the show is ultimately heading, painting Bob Odenkirk’s Jimmy McGill as a tragic character and revealing layers that were never present in Breaking Bad.

So, with the final episode finally getting us past the point of no return, this is when Peter Gould delivers the faintest glimmer of hope in this black-and-white world. In one last magnificent con, Saul Goodman, who had reduced his prison time to 7 years, lays it all on the line for Kim, lying in front of an FBI agent to ensure her presence in the courtroom for her to see his last defiant act.

In this last courtroom scene, Better Call Saul provides an antithesis to Felina, the series finale of Breaking Bad. Renouncing the name Saul Goodman and being asked to be addressed as James McGill in court, Jimmy proves to us that you can stop breaking bad for the ones you love. After showing all the regrets and past ponderings about doing things differently, Jimmy finally atones for his sins. He loses out on his shortened sentence but saves Kim from any possible trouble.

After this purging of Saul Goodman, we get the final ghost and flashback between Jimmy and his brother Chuck, who tells Jimmy, still early in his law career, that there’s no shame in changing paths. Whereas some might see Chuck’s advice to Jimmy as a subtle insult and condescending, it’s deeply coming from a place of brotherly love. The camera closes in on the book Chuck is reading as Jimmy dismisses him and goes down his path that inevitably leads to heartbreak, and that book is H.G. Wells’ The Time Machine.

It’s a powerful last look at the life of Jimmy McGill before it all went wrong and gives us the answer to Jimmy’s time machine question that’s been pondered throughout the entire episode. Now, when all is said and done, Jimmy McGill lives his life behind bars. He no longer sees himself as Saul Goodman, but the inmates he’s riding with to the prison don’t see it that way. As they chant “Better Call Saul!” in a display of respect to the once criminal lawyer, Jimmy simply looks on, knowing that he’s made peace with himself, yet everyone else will remember him for what he did. Well. Almost everyone else.

The final scene of Better Call Saul is a beautiful mirror of its first episode, with Kim visiting Jimmy in prison and sharing a cigarette with him as they did in the pilot, an almost shot-for-shot recreation. In this scene, we get the faintest glimpse of color in what has previously all been black-and-white; the cigarette shared between Jimmy and Kim provides a tiny spark of hope. Jimmy jokes that if he’s on good behavior, anything could happen. But the truth is, he has to serve out all 86 years of his new sentence.

As Kim leaves the prison, she sees Jimmy in the courtyard, who gives her the finger-gun gesture she had given him years back. Jimmy is at peace with himself, coming to terms with his decisions and owning up to his crimes and mistakes. There’s a touch of melancholy like no other with the end of this series finale, closing the book on the Gilliverse and giving us as happy of an ending as we could’ve gotten, considering everything Jimmy had done up to that point.

Saul Gone is powerfully written and directed by Peter Gould, the man who created the character of James McGill, and performed to perfection by Bob Odenkirk, who has brought so many different layers to the character in the past seven years. It was a truly incredible run. Over the course of 63 episodes and six seasons, Better Call Saul gave us a riveting and oftentimes intense journey through time and regret, leading to this series finale that provided the definitive ending to the Gilliverse.

Although some may scorn the Emmys for never awarding this prequel show a single statue despite a whopping 46 total nominations since 2015, whether it be because of the general non-viewer perception that it’s trying to replicate the massive success of Breaking Bad or plain ignorance, it doesn’t matter. Look to Jimmy McGill as an example. While the prisoners at the end of Saul Gone only saw him as Saul Goodman, the con-man turned convict knew what was true. As long as he knew he had changed, it didn’t much matter what others thought.

Fans of Better Call Saul should take comfort that they know what a special piece of television the show was, and any awards that come after the fact are just the cherry on top. Regardless if the series manages does manage to pull off its very first Emmy win next year in 2023 – as the final half of Season 6, capped off by Saul Gone, is in fact eligible – Better Call Saul is a landmark achievement in television nonetheless and will always be remembered.

Better Call Saul is available to stream on AMC+