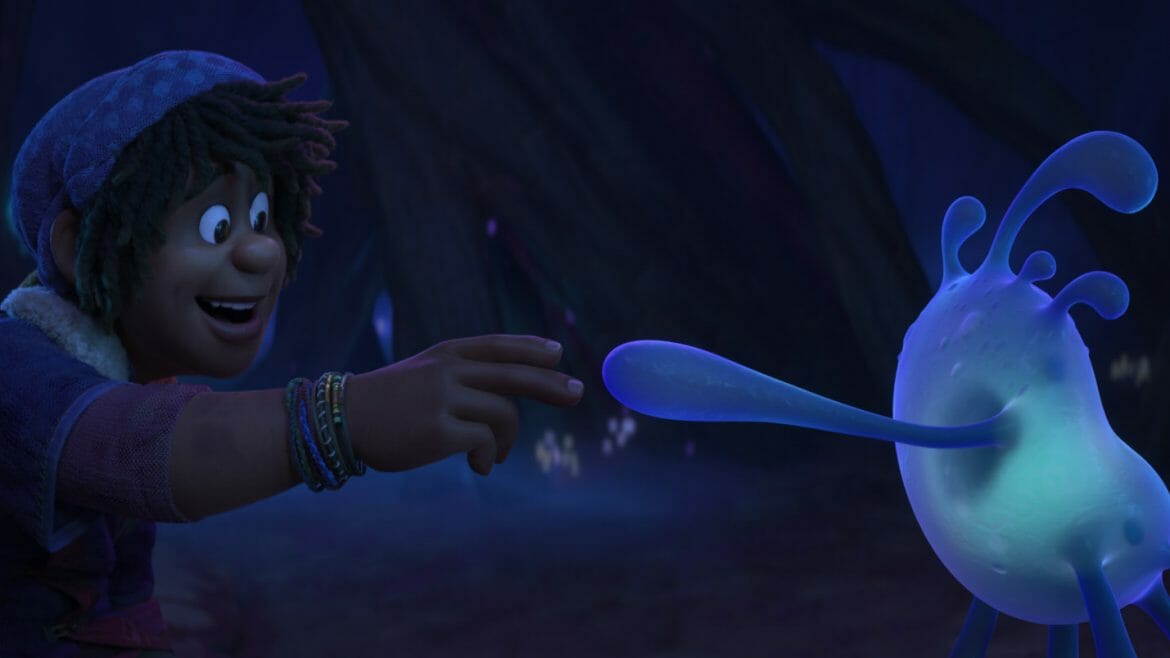 The role of the colorful, larger-than-life sidekick is a crucial one when it comes to Disney animated films. Throughout Disney’s almost 100-year history, the main sidekick has been portrayed through talking animals, non-talking sentient beings, and other types of creatures that are filled with tons of personality despite their often smaller size. Strange World is Walt Disney Animation’s 61st feature coming in hot after the Oscar-winning success of Raya and the Last Dragon from the same director and writer duo, Don Hall and Qui Nguyen. Wherein their last film, Hall and Nguyen treated audiences to mystical beasts as their Disney sidekicks, they’re taking a far different direction in Strange World… one that may seem simpler but is actually far more complex than you could imagine with the small blue gelatinous monster, Splat.

Strange World follows the Clade family of explorers as they get sucked into a subterranean universe where things of all undefined shapes and sizes can eat you alive. The group is led by Searcher Clade (Jake Gyllenhaal), who must find a way to heal old wounds between his own father, Jaeger Clade (Dennis Quaid), and son, Ethan Clade (Jaboukie Young-White) if the group is to survive this unpredictable landscape. They’re on an expedition to find a crucial energy source to take back to their far-away homeland of Avalonia, but they end up coming across hungry creatures with various combinations of wings, tentacles, and appendages. One organism, in particular, is befriended by the young Ethan Clade and is given the name Splat as it helps the crew navigate the Strange World. Get ready to meet your new favorite blue blob.

Splat may merely look like a simplistic ball of goo with legs on the outside, yet the process of bringing this latest idiosyncratic Disney sidekick to life couldn’t have been more complex. During an early press day for Strange World, Heads of Animation Justin Sklar and Amy Smeed gave us a full rundown on the specifics of animating Splat, which you wouldn’t think there would be so many for such a straightforward look. However, as we learned, the real difficulty lies in the simplicity and purpose of the character design, and as Sklar jokingly says, Disney animators always have a tendency to make their lives harder by adding more and more strict rules to adhere to. In the case of Splat, it all comes down to what this small blue blob can and can’t do.

Right off the bat, there are a few key things to know about Splat. For starters, Splat doesn’t talk. Unlike other Disney sidekicks that also don’t talk, there’s no voice actor making sounds for Splat either – think of Alan Tudyk voicing Hei Hei in Moana or Tuk Tuk in Raya and the Last Dragon. Splat is completely created by sound design in this regard, only using a mix of effects for the noise it makes to communicate. According to Justin Sklar, Splat had an added complexity because of the sidekick needing to “communicate fairly specific information” all through pantomime. Splat has 7 tentacles and multiple nubbins, which all had to stay in specific spaces since the creature isn’t a shapeshifter. “Splat is ultimately a creature with a finite volume,” Sklar explains. This means that the animators couldn’t make Splat morph, even if it made it easier for the story.

Justin Sklar clarifies that the Strange World team “wanted to avoid anything that made Splat feel too human or too bipedal.” in following this rule, the animators had to be really careful about how Splat ran around and took advantage of its many limbs. Another tricky issue was figuring out where to give the audience a place to focus when looking at Splat, making sure to not leave any tentacles on top of the body where you would associate it as its head since that “wasn’t really in the spirit of the design” and would actually limit the chances to “play around with Splat’s orientation” as Sklar explains. Furthermore, since Splat can almost literally just be seen as just a ball with legs, the Strange World team wanted to approach the sidekick with a “very hand-drawn and shape-driven” base animation style. But going back to Sklar’s joke, that just made their jobs a lot harder.

Amy Smeed emphasized that Splat doesn’t really “have a proper front, back, top or bottom” and that specific choice was enforced to ensure that the character was always fun to watch no matter what it was doing or how it was moving; “We were always favoring weird, interesting, and entertaining combinations of the movement for Splat whenever possible,” she says. To no surprise, it was confirmed that Splat was the “most technically challenging” character rig to create for Strange World, Smeed revealing that the model was “built from the ground up multiple times before we found a version that could do all of the things we wanted.”

Through Splat’s base animation style, which is firmly rooted in hand-drawn schematics, the final result you see in Strange World feels limitless. Even though the sidekick is technically CG, Amy Smeed likes to still think that Splat still retains that hand-drawn aesthetic – pushing past the “CG limitations of a character like this” as she states. When describing the technical achievement of finalizing Splat on screen, Smeed proclaims that “it’s really just pure visual storytelling, there’s no reference, there are no limits, no safety net.” The tiny blue, flexible companion is just one of the many imaginative beings found in Strange World, though, it will definitely be the most memorable thanks to all of this hard work. Amy Smeed summarizes it best; “As animators, we just have to figure out how to trick your brain into understanding what this spaceless tentacle-covered being is trying to tell you.”