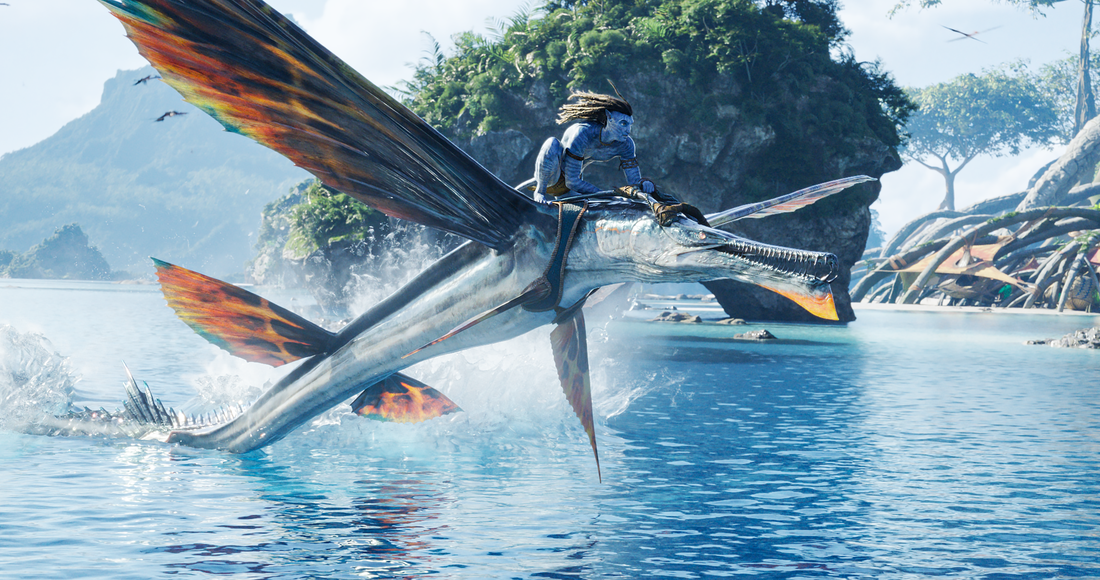 The biggest misreading people still have regarding 2009’s Avatar is the power in its simplicity. Writer/director James Cameron has stated that the intent was to always take a familiar story of colonization and cultural divide (like Pocahontas and Dances with Wolves) and use it to form the building blocks of this franchise and all the lively characters that inhabit it. His execution of hooking the audience with enough familiarity while equally amazing them with a world they could never imagine was and is unbeatable, as Avatar still sits as the highest-grossing movie of all time – reclaiming the title from Marvel’s Avengers: Endgame in 2021 with a theatrical re-release in China. But, of course, that same execution wouldn’t fly with Avatar: The Way of Water given the last decade of James Cameron promising something more unique, groundbreaking, and, most importantly, worthy of a 5-film franchise already deep in production.

Well, as the true believers say, never doubt James Cameron because the prolific filmmaker has once again lived up to his name as the sequel master with Avatar: The Way of Water. Cameron has achieved new technical and emotional heights as he once did with iconic sequels like Aliens and Terminator 2: Judgement Day. All are very different, but follow his same method of madness when it comes to raising the cinematic scope while further expanding upon the core themes established in the first film. Now, can you nitpick and few similarities between Avatar and Avatar: The Way of Water? Yes, however, it’s not any different from pointing out how the first two Terminator films are both about escaping a killer robot from the future – the major differences being in the shifting character dynamics, deeper personal stakes, and advanced threat level.

The only similarities between these first two Avatar films are returning plot points that shed more light on the franchise’s main ideas on family, cultural acceptance, and environmentalism. Besides these few recognizable beats, Avatar: The Way of Water is an entirely different movie. Years after the great war with the sky people, clan leader and “Toruk Makto” Jake Sully (Sam Worthington) and his soul mate Neytiri (Zoe Saldaña) have begun to raise 4 kids; older brother Neteyam (Jamie Flatters), younger brother Lo’ak (Britain Dalton), youngest sister Tuk (Trinity Jo-Li Bliss), and their adopted oldest daughter Kiri (Sigourney Weaver). Because of Sully’s leftover human DNA, his children are hybrids forced to bear physical traits that are often detested by real Na’vi. To further complicate things, Kiri was mysteriously born from the Avatar body of Sigourney Weaver’s Dr. Grace Augustine, who was actually pregnant when she died.

All is well for Jake Sully’s clan until the capitalists from Earth return to colonize Pandora with reinforcements, and a new secret weapon to wipe out the Na’vi. The mind and memories of the deceased Colonel Miles Quaritch (Stephen Lang), along with some of his best former troops, are resurrected in Avatar bodies to carry out a covert assassination on Jake Sully at all costs. The real Quartich still died on Pandora, this new physical form is but a hollow shell of who the fierce global patriot used to be. When these Avatar marines get too close to Jake and Neytiri’s children, the family must leave their forest tribe to avoid more tragedies and seek refuge with the ocean reef people clan of Metkayina. It’s here that they have to face extreme scrutiny and adapt to new ways of living with the water as Quaritch hunts them down.

Whereas an entire clan and their forest home were at stake in the first film, Avatar: The Way of Water is all about the unity of Jake and Neytiri’s unorthodox family and Quaritch seeking revenge straight from hell. At the same time, the visual spectacle is somehow on a whole other grand level. Putting aside the obvious advancements in VFX, CGI, and 3D technology, it’s almost impossible not to get lost in James Cameron’s supremely imaginative worldbuilding. From the unseen corners of Pandora’s island tribes to the film’s new elements of science-fiction – mainly seen with Kiri and Spider (Jack Champion), a young human boy who plays a big role as his one desire is to live with the Na’vi – this is the latest model example for the perfect blockbuster sequel. Bring the audience closer to your characters while proving to them that they truly haven’t seen anything yet.

Speaking of the characters, Sam Worthington and Zoe Saldaña ground the film with heartfelt performances and establish themselves as the soul of this franchise with their on-screen romance. Worthington is back on narration duty and brings that same much-needed touch of human snark and attitude. After all the loss and emotion that she had to sell in the last film, it’s even more impressive and engrossing to see Saldaña give what genuinely feels like her all here. Cliff Curtis and Kate Winslet as reef clan leaders Tonowari and Ronal are exceptional new additions, as are Edie Falco and Jemaine Clement in their short screen time. Kate Winslet’s ferocity especially comes through super vividly in what is her first motion capture performance. Everyone already mentioned gives a fine turnout, however, Sigourney Weaver and Stephen Lang deserve special recognition, which is quite shocking given that they were previously killed off.

Both Kiri and a resurrected Quaritch could have easily been either the weakest or most off-putting elements of Avatar: The Way of Water. The former is a veteran actress portraying a child and the latter is a villain who has all but served his purpose brought back from the dead. Their characters on paper are technically different, yet it’s through their bold performances that Avatar: The Way of Water is elevated beyond its technical flare, as is with most of the stacked cast. Weavery is particularly admirable as Kiri as she quickly sells you on her youthful spirit. Lang maintains all of Quaritch’s military dogma and humor, though in a far more nuanced performance. His arc may be fueled by revenge, but his struggle to grasp irony and purpose as an Avatar makes him incredibly fascinating. This could very well be an all-time villain in the making.

There have been recent debates that films like the Avatar series only work in the cinema and not with home viewing. In this case, that would mean being stripped of the highest 3D quality and High Frame Rate projection. Although it cannot be denied that Avatar: The Way of Water is perhaps the first blockbuster to perfect the use of HFR, previous theatrical attempts like Ang Lee’s Gemini Man and Peter Jackson’s The Hobbit were both scoffed at due to their uncanny valley effect, it’s rather silly to credit all of the film’s success on people just wanting to see something pretty on a big screen and not actually be emotionally moved by it. James Cameron holds no punches in Avatar: The Way of Water, testing our characters to greater limits and how much we can see ourselves reflected in this epic tale of cultural identity and mother nature.

Ultimately, this is why Avatar: The Way of Water will etch its place in the lexicon of blockbuster cinema. Not solely because of the technological evolution on display, but because this is modern myth-making at its finest. Should you go out of your way to see this in IMAX or 3D with HFR? Absolutely. For those that don’t, there’s still more than enough raw emotion and cinematic glory to win you over, and maybe even convince you to go back for another round in a different format! The only minor complaint to have is with the film’s 3 hour and 12 minute runtime, which could have been totally acceptable if not for a third-act climax that feels like it goes around in circles a bit too much. For what it’s worth, this is forgivable when you’re witnessing filmmaking ambition equivalent to what George Lucas originally did with Star Wars.

James Cameron recently told Total Magazine that he and producer Jon Landau have a contingency plan to end the franchise at Avatar 3 instead of 5 should The Way of Water underperform at the box office. Yeah, don’t expect to see that happen,