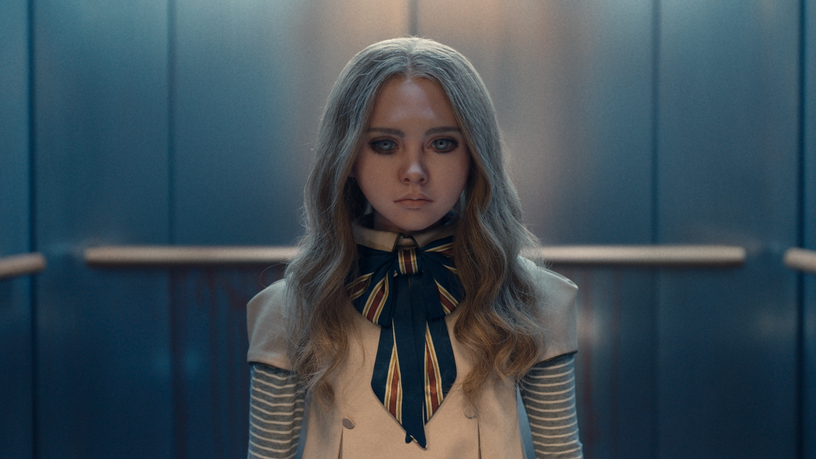 M3GAN delivers our next great horror icon, and ready or not, she’s certainly here to stay. Rarely has such a well-rounded hit come this early in the new year, but leave it up to Blumhouse and Universal to keep upping their own game. Phrases like “cult classic” get thrown around a lot in today’s horror landscape, often a bit too loosely. A film may have all the makings of a cult classic on the surface, however, as the old saying goes, you’ve gotta also walk the talk to succeed. In this regard, M3GAN struts its way to glory almost effortlessly. It’s the kind of horror flick that knows it can’t get by on just its absurd premise and scares alone. If you thought the killer doll cliche was totally washed out by now, director Gerard Johnstone (Housebound) and writer Akela Cooper (The Nun 2) are set to prove you wrong.

There’s another name that must first be recognized when praising M3GAN, and it’s James Wan. The filmmaker who’s had a huge hand in the Aquaman, Insidious, and Conjuring franchises developed the story for M3GAN with Akela Cooper and co-produces under his Atomic Monster Productions label (which recently signed a merger with Blumhouse). Wan and Cooper previously worked together on Malignant and say whatever you want about that film, but it understands what camp is and knows how to pull it off without dumbing down the audience. If you enjoyed Malignant (like most people with taste) then you’re in luck because that very same tongue-in-cheek tone is felt in M3GAN. It’s understandable if crude humor and schlock aren’t your cup of tea, but our main killer doll couldn’t be bothered. Still, Wan and Cooper aren’t simply pulling old tricks here, for M3GAN has its own unique qualities.

We follow Gemma (Allison Williams), a brilliant yet lonesome roboticist at the dominating toy and collectibles company Funki. Their best-selling items are Purrpetual Petz, a talking parody of the iconic real-life Furby that is meant to fulfill all of a child’s playmate needs. When rival brands start making their own copycat models, Gemma is frustratingly tasked with taking Purrpetual Petz to an unbeatable level, but she has something else in mind. She’s got a prototype ready for her next great invention, the Model 3 Generative Android – M3GAN for short. Her boss David (the hilarious Ronny Chieng) refuses to greenlight the project until Gemma’s niece Cady (Violet McGraw) enters the picture. Cady recently fell under Gemma’s custody following the freak accident death of her parents. Unable to satisfy Cady’s emotional needs due to her own awkward solitariness, Gemma decides to pair her niece with the M3GAN life-like doll prototype.

M3GAN is not only designed to answer a child’s companion needs, but it can also carry out parental duties and instill different levels of conditioning. From having storytime to giving necessary reminders like flushing the toilet and washing your hands for 20 seconds, M3GAN can be there to look out for a child when the parents either can’t or need time for themselves. Anyone can tell this is a recipe for disaster, but not Gemma who spends all her time drowned in the world of toys and collectible figures. The M3GAN prototype exceeds all expectations, advancing its abilities to Cady’s fluctuating emotional state. Exactly like every other self-sustaining A.I. in film history, this doll grows too smart and soon seeks to replace Gemma as Cady’s one and only caretaker. It’s then human vs kill doll in a race to see who can win Cady’s heart.

It doesn’t take long to figure out the familiar plot at the forefront of M3GAN, though James Wan and Akela Cooper seemingly use that proven structure to their advantage. M3GAN may have its fair share of killer doll and evil A.I. tropes, however, when put together in a wild combination like this, there is nothing else like it in the horror genre. Funny enough, the one example that comes close is the divisive Child’s Play reboot from 2019, wherein Chucky was reimagined as an A.I. robot. Any killer doll is going to have a rough time escaping the Chucky comparisons, as the original 1988 film basically defined the genre, but M3GAN really does feel like a better refined version of that reboot. The family dynamics at the film’s core draw back to the Child’s Play franchise as well. Thankfully, this familiarity isn’t much of a setback for M3GAN.

Regardless if you already have a good idea of where the story is going, M3GAN revels in its simplicity and lets loose with the rest, filling in the blanks with tons of personality. You can never truly call this movie lazy, even with its main theme of the overreliance on technology, which under lesser hands could have simply resorted to “technology bad, spend more time with your kids.” M3GAN doesn’t try to sell the audience quick and easy messaging, it instead gives us examples of why we might try to rely on technology in the first place and what voids we try to convince ourselves can be fulfilled by it. Similarly, the film makes a few jabs at modern consumer culture (the main toy company Funki being a clear spin on Funko) and it only further drives home the campiness of it all.

The film’s witty script gives Allison Williams and Violet McGraw much more fun to work with. Most known for The Haunting of Hill House and Doctor Sleep, McGraw is a joy to watch as she rightfully earns her heroism by the end. The true star of the film, though, is brought to life via two performers and each deserves equal praise. Jenna Davis provides the voice of M3GAN while Amie Donald performed in costume on set. An additional mix of puppetry, VFX, and animatronics was used to craft the fully-realized doll we see on-screen. Davis is especially wicked as the voice of M3GAN and gives the doll a hysterical attitude. She compliments Donald’s physical movements that go from lively to stone-cold mechanical when needed. Together, they make M3GAN an incredible technical achievement that you just can’t get enough of.

This finally brings us to the strongest aspect of M3GAN, which compliments how much of a comedic thrill the main killer doll is. Director Gerard Johnstone takes his time building M3GAN up as a threat to be reckoned with, one that’s more frightening than you would expect. The film immediately lets you know what kind of ride you’re in for with crude jokes at the very start, though this kind of humor never diminishes the eerie atmosphere and sinister visuals that Johnstone utilizes throughout. M3GAN’s hallway dance sequence has already gone viral, and yet that’s only a taste of the film’s inspired terror – scenes that always retain the utmost creepiness despite being innately comical. It’s moments like M3GAN chillingly singing David Guetta’s Titanium to Cady as she falls asleep that encapsulate why this movie works so damn well, an impressive feat for what is barely Johnstone’s second feature film.

Where M3GAN does slightly underwhelm is with the kills themselves. The film is more of a reserved slow burn that works its way up to a big showdown. Nonetheless, some of the violence sprinkled in the second act feels like it’s held back by the PG-13 rating. Not that this movie necessarily needs to be super gory, but the campy tone lends itself to that more than cutaway deaths do. As other Blumhouse successes have been Rated R, the PG-13 rating of M3GAN seems like a ploy to get younger teens in the theater. Is a safer box office bet worth leaving this aspect of the film feeling compromised? That’s up to your own tastes. Now, would a warranted M3GAN sequel benefit from an R rating? That answer is clearly yes. Let her slice more people up!

M3GAN is a horror fan’s delight. While some won’t see eye to eye with its campiness, others will find their new favorite slasher. This concept had so much going in its favor right from the start thanks to the creative team alone, and the film rightfully follows up on that potential. To use another popular saying, James Wan and his team understood the assignment on what makes the killer doll storyline so addictive to begin with. Above all else, M3GAN is a villain we can actually invest in and root for. As silly as that sounds, this doll’s got spunk and an unpredictable screen presence. The makings of a stellar horror series are all present, and M3GAN puts them to good use. Love or hate her, this won’t be the last we see of M3GAN and we trust wherever her creators decide to take her next.