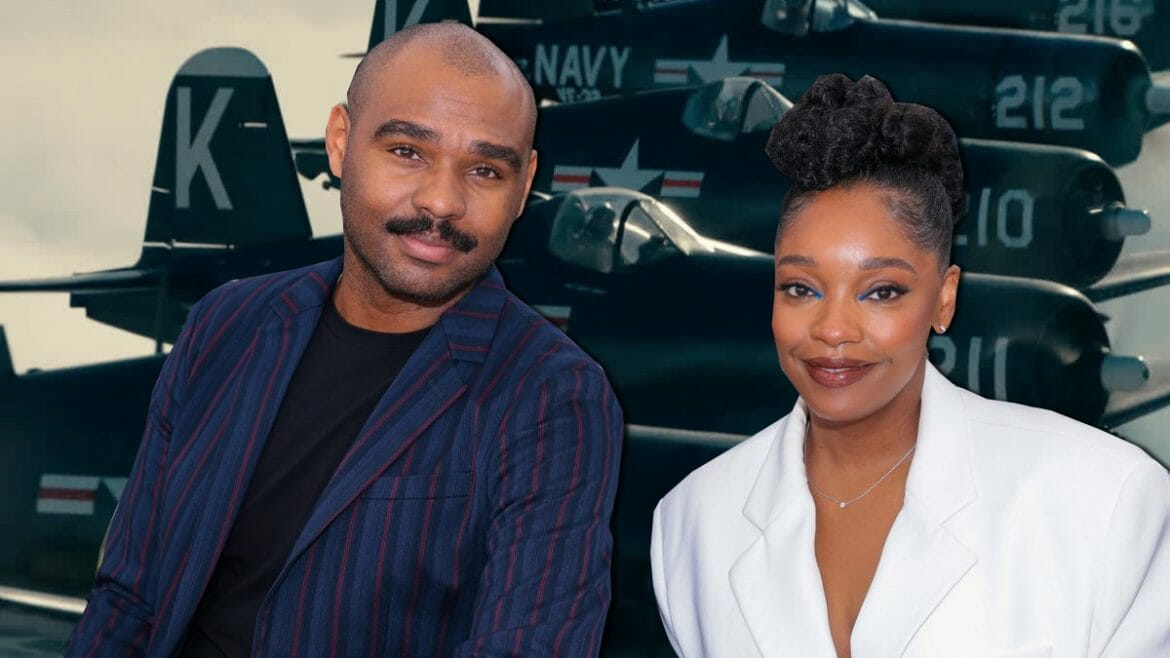 A “Best of Next” nominee at the 2016 Sundance Film Festival for his feature film directorial debut, Sleight, JD Dillard’s latest film, Devotion, took the Toronto International Film Festival by storm in September. Coming off the heels of Top Gun: Maverick, Devotion met high expectations with favorable reviews, critics noting not only the powerful performances from lead stars Jonathan Majors, Glen Powell, and Christina Jackson but for Dillard’s prowess behind the camera and some of the best-shot flight sequences to date, especially in IMAX.

As the son of Bruce Dillard, the second Black naval aviator in history to fly with the Blue Angels squadron, there is no filmmaker more adept than JD Dillard to bring the story of Devotion to the masses. Based on the novel by military historian Adam Makos, Devotion follows the heroism and noble sacrifices of Jesse Brown, the first Black aviator to complete the Navy’s flight training program and serve in the Korean War. A recipient of the Distinguished Flying Cross, Brown’s unmatched legacy is now immortalized in Dillard’s biographical war epic.

However, Devotion isn’t just about Jesse Brown’s time in the war and the adversities he overcame like racism. JD Dillard’s film also gives audiences a deep look into Brown’s tight friendship with his wingman Tom Hudner (Powell) and his beautiful marriage to his wife Daisy (Jackson). Christina Jackson powers the emotional core of Devotion with her portrayal of Daisy Brown Thorne, and together with Jonathan Majors, the pair sell such a genuine romance that gives the film a sense of humanity above most war stories on the big screen. Jackson’s wonderful acting range can be seen across a breadth of projects, including Outsiders, The Good Fight, Swagger, The Night House, and the upcoming film, Shirley.

In an exclusive joint interview with JD Dillard and Christina Jackson, we were able to pick their brains on the creative processes behind Devotion. We cover Jackson’s approach to Daisy and any trepidation she battled with portraying a beloved figure in Black history. Meanwhile, Dillard shares how having his very own father as a consultant on the film impacted how he shot intimate scenes between Majors’ Brown and Jackson’s Daisy. Dillard has gone from a street-level thriller in Sleight to an island-set horror in Sweetheart, but this third feature hits close to home like nothing other in his growing career.

My first question is for JD Dillard, what were some of the things you were looking for that you knew would be perfect for casting the roles of Jesse, Daisy, and Tom in Devotion?

JD Dillard: I came to Devotion in an interesting way, as I was one of the later pieces added to the film. Glen Powell found the book about six years ago and brought it to Black Label Media, and they started developing a script off Adam Makos’ book [Devotion: An Epic Story of Heroism, Brotherhood and Sacrifice]. And Glen was developing it to play Tom Hudner. So when I read the script and met Glen for the first time, I was like, “Great, this makes total sense.” You know, my sort of first matter of business was, ‘Well, obviously, it has to be Jonathan Majors as Jesse Brown.”

Having just been such a fan of his, the family starts to grow, you know? Then you’re like, “Well, if we have such great actors and such emotional reality with these two, we can’t skimp on Daisy either!” I was then introduced to Christina, who obviously brings such heart to the movie, and then you’re like, “Okay, the squadron needs to feel real, they need to feel of the same movie.” We were so lucky to get, Thomas Sadoski, Joe Jonas, Darren Kagasoff, Spencer Neville, and Nick Hargrove to fill all of that out and just have this squadron that felt like they had been together for a long time.

That’s awesome! For Christina, when you were preparing for the role of Daisy Brown, was there anything in particular that you learned about her during your research that you would like to share? And was there any nervousness or trepidation portraying Daisy because she’s an actual real figure?

Christina Jackson: Oh, it was all nervousness and trepidation! Because you want to fully honor someone who’s not going to see the film. There was still this pressure because, you know, she still has a daughter, granddaughter, a great-granddaughter. And there are folks who knew her who would still hold me to the bar of giving her flowers and giving her respect in my performance. So that’s a big deal. I knew nothing of the story at all. And so, in reading about Jesse and Daisy, they went through a lot together. You don’t watch them fall in love in this movie. They are already husband and wife. They are already parents. They’re in Rhode Island, and he’s entering a new phase of his life. She’s entering a new phase of her life.

And something that I was surprised by that I would want people to know? I think when people describe Daisy, they describe her as this very strong, stoic woman. There is a video of her at the White House that is a scene at the end of the film. And when people talked to me about it, they would say how strong she is. How stoic and how commanding she is. But to me, she was very terrified there. It was something that was very clear to me the first time I saw it. It was this thing of, we put so much on her and knowing the story, she had no choice but to go on and carry out her life. So there’s this thing of remembering that Daisy was only in her twenties when all of this happened, you know?

It is the 1950s, and while her husband is breaking barriers and being this vanguard as the first Black naval aviator, this new level for us as Black people, she doesn’t have anybody else to go talk to about Black Navy aviator wife situations because she’s the first one. And much with JD’s mom, even 30 years later, there weren’t that many other Black naval aviator wives. So it was just a matter of giving honesty and realizing that she was figuring it out just the same way I get up and figure out my life every day as well. But in watching the videos of her, she still lit up when she talked about Jesse. You can tell that the love there was exactly what he said it is at the end of the film, “Forever.”

Speaking of the love in Devotion, I really enjoyed the chemistry between you and Jonathan Majors. You mentioned how we already see Jesse and Daisy as husband and wife, you don’t really see their love story before that. So what was it like for both of you to create that chemistry?

Christina Jackson: I mean, listen, Jonathan is not a bad acting partner to have, okay? (laughs) There weren’t a whole lot of things that had to happen. He is charming, he is charismatic, he is funny, and he is intentional. He is all of those things that you immediately know when you hear the story of Jesse Brown. So, for me, the best part is that he came ready to work.

We sat down and had these conversations. You know, is he tactile? What do we want to show when they’re in the house together? Is it the looks? Is he going to touch? How are we going to show this love between these two people? Because when you talk about Jesse and Daisy, that love is palpable. Everybody who knows them knows how much that man loved that woman and how much that woman loved that man. So we went out and had conversations; we had ice cream, we went out to dinner, and we sat in parks, but also whenever I needed him to be available to me, he was present.

So “right” is not the word, you want to do it so honestly. I keep going back to that word, but that’s what it is. So in building these characters and showing who they are, again, nobody was with them when they were in the house alone with Pam [their only daughter]; nobody knows what those conversations really were. It was a matter of getting in there on the day in the space and just letting it take over and letting it happen. No matter how prepared you think you are, you can get on set and be surprised by yourself.

Finally, for JD Dillard, what was it like for you behind the camera on Devotion, being able to shoot some of those intimate scenes where we see Jesse and Daisy sitting on the beach, looking out into the sunset?

JD Dillard: It’s a little out of body because, in a way, I was shooting conversations my parents have also had, you know? Whether that is at the dinner table or whether that is saying goodbye at the beach. So to kind of feel yourself in there, to make real this part of your family’s life that you’ve never really emotionally engaged with, that you’ve always known as just a story, was really beautiful.

So much of my process early on and just getting my feet on the ground in this movie was calling my parents and asking them, “What was it like to tell mom when you were leaving?’” And that really armed me with the language and almost the body memory by getting it from [my parents] to then go to Jonathan and Christina and be able to talk about how I think these scenes need to feel. It was definitely weird to look at the scene and imagine yourself as little Pam, and these are your parents talking about this thing. But I think that’s, again, to use our overused word; that just helped me tell it honestly.

Devotion is now streaming on Paramount+

Britany Murphy is a Tomatometer-approved critic and editor with a special passion for literature and comics. You can always find her reading the hottest fantasy novel or catching up on the latest run of X-Men and Wonder Woman. In addition to DiscussingFilm, Britany's contributions can be found at Muses of Media, Screen Queens, CinemaDebate, Geeks of Color and more.