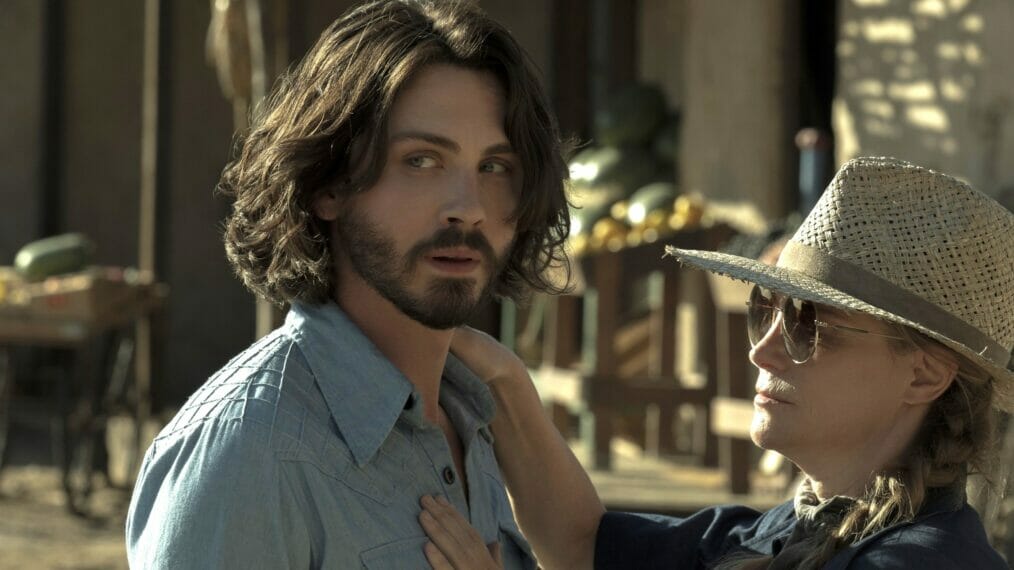 When Amazon Prime Video and Jordan Peele’s Monkeypaw Productions first announced Hunters, the premise was an easy sell. Al Pacino’s Meyer Offerman, a Jewish Holocaust survivor, assembles a team of specialists to hunt escaped Nazis. If the popularity of Wolfenstein, over 80 years of Captain America comics, and (likely the most influential on the series) Quentin Tarantino’s Inglourious Basterds has shown us one thing, it’s that we like seeing Nazis get their heads kicked in, especially if it’s their own targets turning those tables.

This base thrill gets a wrench thrown in the works, however, when the first season gets to its twist: Meyer’s true identity is that of an escaped Nazi, posing as a Jewish survivor in secret while picking off his old allies. Quickly after this, he’s killed by Jonah Heidelbaum (Logan Lerman), the real Meyer Offerman’s grandson, who takes over our main group of Nazi hunters to lead into season 2. What had been a decent show about carrying out revenge became a meditation on the hunt itself and the first season felt like it collapsed under the weight of those themes, mainly as they got introduced in the final stretch. Now, two years later, Hunters season 2 is here to bring the series to a satisfying end.

Much like Lerman’s Jonah, Hunters feels like it’s grown up since we last saw it. Gone are the allusions to superheroes and the gags of the first season, now replaced with what is for the most part a decently grounded action-thriller plot. This shift provides a sense of growth and stakes in Hunters season 2, something that’s necessary for the wrap-up of a series dealing with such heavy subject matter. This does, however, have the effect of instilling a sense of reality in the heightened and unrealistic threads that carry over from the first season.

One such scene sees someone breaking down the reasons why they don’t believe that Adolf Hitler killed himself. Their arguments in this scene use actual historical evidence. What was previously very easy to accept in a campy action series becomes a conspiracy that requires justification in the second season’s thriller turn. This feels like an uneasy move from a show that already got some attention for Holocaust misinformation after being criticized by the Auschwitz Memorial Museum. Although the later part of Hunters season 2 makes it very clear that this is meant to be an alternate-history tale as opposed to one that could have happened in our time, as Hitler himself (played by Udo Kier) is very much alive and leads our heroes on a hunt from Europe to South America.

The higher stakes of Hunters season 2 also make for extremely tense moments of danger. Most notable of these is in the penultimate episode, a diverging story that doesn’t let up until its final moments. Unfortunately, the payoff of these moments often ends up being visually messy gunfights that last far too long, losing any and all tension is lost in the confusion. There are far more Nazis to dispose of in these final episodes and while that means that the ante has effectively been upped, it also means that deaths, both heroic and villainous, are generally given less weight and time to land.

The strength of Hunters lies in both its characters and the incredibly raw and potent emotional material that it has to work with. This season sees showrunner/series creator David Weil realize those strengths and employ them to their fullest, effectively juggling all the players already in the story while shuffling in a few excellent additions, one being the great Jennifer Jason Leigh. New character pairings this season like Leigh with Logan Lerman are especially dynamic and help to flesh out and develop the main cast. Jerrika Hinton, Lena Olin, Josh Radnor, Tiffany Boone, Carol Kane, Louis Ozawa, Kate Mulvany, and Greg Austin all return, and impressively each get their moment in the spotlight. Even the actors that seemingly get pushed to the back this season end up with some of the finest emotional beats of the series by the time the show wraps up.

Hunters spends its final season recontextualizing not only what had occurred in the first season but also the show’s very purpose. There was a sense of unease about the first season’s reveal that the show intended to employ the oft-repeated just-as-bad-as-them sensibilities that a number of media toys with, yet Hunters finds its conclusion not in justification or passivity towards Nazis but rather in its version of proper justice. And in the last run of its last season, what was a show about the catharsis of seeing history’s monsters have revenge carried out on them by the very people that they victimized becomes a bold vision of justice that never got to be served, proving to be all the more cathartic for it.

With the groundwork of the first season laid, Hunters season 2 is given the opportunity to realize its potential. At a time when streaming projects are unceremoniously canceled and buried, it’s refreshing to see a series finish its story and end on its own terms. Despite a rough first season and a slower first few episodes, Hunters season 2 proves itself in the last act, making for a solid conclusion that elevates the rest of the show that came before.