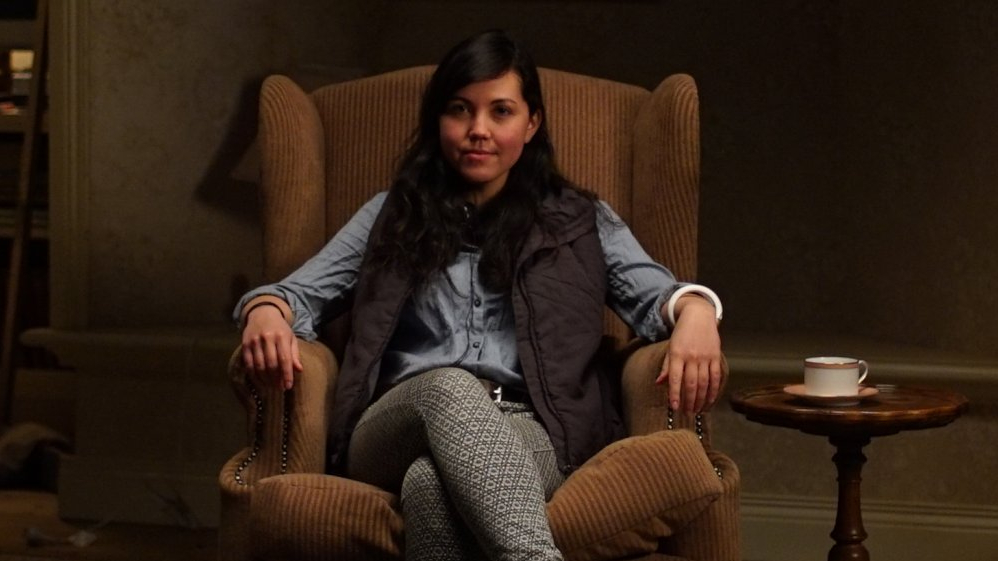 Japanese-Australian filmmaker Natalie Erika James has been creating short films since 2010, as well as lending a hand on set with other notable features like 2018’s Upgrade. All of her work has noticeably remained in the realm of supernatural horror, but always with a focus on very real, familial trauma and fear. Her feature-length debut, Relic, is no exception.

Starring Emily Mortimer, Robyn Nevin, and Bella Heathcote, Relic is a tense and terrifying descent into a deteriorating mind with a surprisingly tender and moving touch. Having had its premiere at the 2020 Sundance Film Festival, it’s a worthy addition to the current wave of powerful horror films. While comparisons to other up and coming horror filmmakers like Ari Aster or Robert Eggers may be unavoidable, Relic makes it obvious that James is in a class all her own.

We had the lucky opportunity to have Natalie Erika James for an exclusive interview. We talk the emotional core of Relic, what influenced it, and its journey from premiering at Sundance to now being released on VOD. She also shares her experience collaborating with the Russo Brothers as producers and gives a tease of her next horror feature. Mild spoilers for Relic follow.

Relic is effectively scary and unnerving. Though it’s also very beautiful. I feel like it’s a story that had to come from a deeply personal place. Yet, it also still feels universally relatable. So in developing this script with your co-writer Christian White, how much of a personal place did it come from? Or is it entirely fictitious?

NJ: Well, I would say definitely a personal place but taken to the highest supernatural extreme. My own grandmother had Alzheimer’s for some time. It was definitely drawing on things that I observed in her, feelings of guilt about not seeing her more often which probably led to the shift in dynamic within the family. She started to decline and her relationship with my mother changed. She lived in Japan in this quite eerie traditional Japanese house that I was really scared of as a kid. I spent most of my summers there. I got this idea about a house being bigger on the inside than the outside. Obviously very House of Leaves in a way. That book is still one of my favorites and the idea kind of grew from there. So yeah, very drawn from emotional truth if not what actually happened.

I love that you approach the subject with a classic “haunted house” horror style. What were some films or stories that inspired the feel and look of Relic?

NJ: The novel House of Leaves as I mentioned, in terms of the eeriness and uncanniness of the space. A lot of Asian horror is something that I loved as a teen growing up. I definitely drew on the atmospheres that those types of films capture so well. Tonally, I think something like The Orphanage by J.A. Bayona we always had in mind because it amazingly balances that emotional through line with a horror framework. That was really, horrifying. Something like Antichrist too, there’s a really insidious, uncanny, and sinister kind of force at play. I would count that as a reference.

The structure of your film, it builds up to such a chaotic climax in comparison to what’s before it. It suddenly just takes off.

NJ: I would often point to Kill List by Ben Wheatley, who I love, because that film has this similar – I mean very different – but it has a very similar structure and the right kind of tension. It pulls you in and then just goes haywire. I love that.

Emily Mortimer is fantastic in the film and it’s one of the best performances I’ve ever seen from her. Did the casting process come along smoothly? Did you get who you were looking for or were you not looking for anything in particular to begin with?

NJ: This was my first time working on anything where you don’t audition people. And of course, when you’re casting actors of a certain profile, it’s more about discussions and conversations you have with them. So that was really eye opening. We had a bunch of creative conversations with our core team about different combinations of actors, particularly because they would have to pull off the Aussie accent as well. I had long been a fan of hers in particular and so it was Nine Stories who knew her directly, our producing partners. I met her in New York and it was just so wonderful because of course you know someone’s body of work, but I don’t think you get the proper vibe from them until you meet them.

She was just so incredible, just so gracious, hilarious, and intelligent. I could tell she really connected with the script in a certain way. I was really excited to jump on board with her and we never really talked about it like a horror film. That’s one of the things that really appealed to me, that she just connected with the emotional journey of that character and her understanding of grief and loss was one of the key things.

I love the idea near the end where it seems like it’s not about defeating whatever that terror may be. This applies to a lot of other horror films as well. It’s about figuring out how to accept it, understand it. Relic feels especially relevant right now and I’m sure you couldn’t have predicted the state of everything going on, but how do you feel about the timing of your film’s release?

NJ: It is really interesting, isn’t it? Because obviously COVID-19 is affecting the elderly in such a way that it just doesn’t have the same consequences for the young. It’s heartbreaking to think about all the retirement homes that have seen so many losses, and I’m sure a lot of people are grappling with a loss or a decline of their loved one, particularly elderly loved ones. I remember someone saying 2020 is enough of a horror movie as it is, why should we go watch a horror movie? But the film for me doesn’t have a nihilistic view of the world. It doesn’t leave you cold. It really is about the importance of connection in the face of the harshness of the world and inevitable death. I hope in some ways that resonates with the times, no matter how terrible the outlook of things seem at the moment. It definitely comes back to relationships and being there for the people that you love.

What was the process like in putting together the ending of the film?

NJ: We certainly got some pushback. I don’t know if you call it “shopping” the script around, but in the search for producing partners and financers you have all sorts of conversations. Some people would definitely be like, “How is this going to be emotional? To me, it just sounds grotesque.” I think it’s all in the execution, of course. Personally, I feel like it would be heartbreaking to depict Alzheimer’s or the person suffering from Alzheimer’s as this evil force that needs to be vanquished. So that reconciliation at the end and the empathy that you feel for all three characters had been paramount from its conception, essentially. It was never about casting off the ugly parts of life and rejecting our inevitable decline. It’s very much about the horrors of it, but also the acceptance.

What was it like premiering at the Sundance Film Festival earlier this year and getting to see those reactions, and now having to promote the release digitally?

NJ: It was incredible. I’m so grateful that we even got to squeeze in our premiere because so soon after, everything was shut down. I really feel for the filmmakers whose films were supposed to premiere at SXSW for example, and just having to pivot in their approach or strategy. But it was incredible. It was a dream come true. It’s literally the thing that you dream about as a young filmmaker or film student. It was just this incredible high and the best part was definitely getting to celebrate it with the team. I had a lot of heads of department and, of course, the cast were there too. It’s an indie film and everyone is pushing the resources as far as they can.

It was amazing to be able to come together to celebrate. Also, just the response from the audience – having people come up to me after and talk to me about their own experiences and why the film really hit home for them. If it can touch people in that way, I think that may be the most valuable thing from sharing it with the wider world. The release has been really interesting because obviously, you think of horror and you want it to be shown in the darkness of the cinema. This film in particular is so dark. But I think that IFC has done an incredible job in making the most out of the situation, playing in drive-in theaters everywhere. There’s something so wonderful about that, it being kind of like an event and something you do with people. I’m really heartened to see that.

You had a couple of big name producers on the film as well, like Jake Gyllenhaal from Nine Stories and the Russo Brothers from AGBO. What was the collaboration with some of them like?

NJ: Yeah, they were both really great. Nine Stories came on in late development. We did a few drafts of the script with them and just from the get-go, they clearly understood how important the dramatic, emotional character aspects of the film were and how they worked. It was great to develop the script further with them. It just felt like they knew what we were going after and they just helped us make it even better.

Then with AGBO, they came on and kind of co-financed and executive produced. They were more involved in post. We actually spent about three weeks over in LA together once the film was closer to completion. That was great because the Russo Brothers are such masters of their craft and they’re brilliant storytellers. It’s amazing to get notes from an executive producer where they come with potential solutions as well. You can riff off each other to try and find the right one. I felt like I learned a lot from them. I’m really just thrilled that they even wanted to take part in the film in the first place.

Has lockdown been productive for you? Or has it been the exact opposite?

NJ: Both, right? I’ve had two weeks of just being glued to the news and baking a lot. I think we’re all collectively in shock or something – in disbelief. I had some very unproductive weeks and then I actually joined a writing group and that has been a game changer for me. It just means that you have that sense of community or support. We just get on Zoom and write for however long, four hours or whatever it is. Then you have little breaks in between where you just chat. In that sense, it’s been productive. I’ve just completed a draft of my next project, which is great.

How exciting, can you tell us anything more about that?

NJ: Yeah, it’s a Japanese folk horror. Very much in the vein of The Wicker Man or Rosemary’s Baby. It’s all about motherhood and sacrifice, literally and figuratively (laughs). Relic is about death and mortality. This next film is definitely about birth and creation, the small things in life.

Relic is now out on VOD