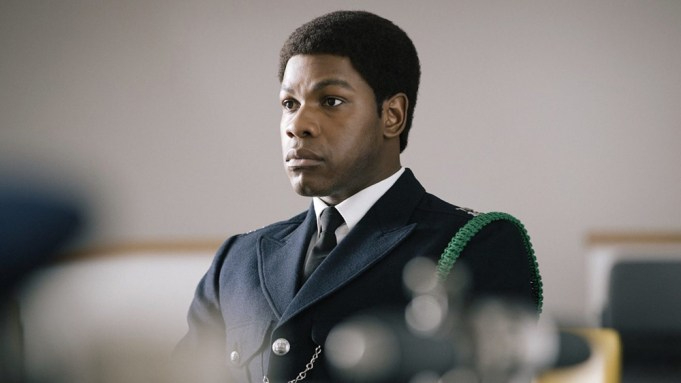 Red, White and Blue sees a never-better John Boyega. Completely absorbed in director Steve McQueen’s world, Boyega is a force to be reckoned with in this third win for the Small Axe anthology. Red, White and Blue is an astonishingly powerful piece of cinema. Like all of McQueen’s Small Axe installments, the film travels through a unique perspective of the Black British experience – this time based on the true story of Leroy Logan, a Black British police officer.

Leroy Logan gave up an impressive job as a research scientist to try and fix systemic policing problems from within. Upon passing through his training in a top-class manner, Logan is hasty to jump into his newfound role as a Metropolitan Police officer. Though trouble arises as Logan realizes more and more that the prejudices present are near-immovable. Dissatisfaction is felt as he had hoped to drive change through community outreach, but instead he is isolated and ousted between two sides.

McQueen’s film critiques British policing, not limited to the bigotry and systemic racism within the Metropolitan Police. Unlike Mangrove, its examination is from within. While it holds similar themes to it’s Small Axe counterpart, it feels vastly different. Film by film, McQueen’s anthology continues to illuminate a crucial light on varying angles of life within the West Indian London community.

Boyega is a phenomenon, he is on top-form in this career-shifting move. If Red, White and Blue were set to have a theatrical release instead of for television, you would certainly place Boyega at the top of this year’s Oscar predictions. Playing Logan with a balance of tragedy and passion, his defiance is full of fiery fervor and allows for spectator alignment in the frustrating prejudices he faces. Additionally, Shabier Kirchner continues to bring a magic touch to the film’s cinematography. Shooting on 35mm film, his visuals are a little less stylistic than the feverous colors and movement of Lover’s Rock, or the intimacy and grace of Mangrove, yet Red, White and Blue contains an ever-strong, engrossing allure for the eyes. It’s equally as impressive, but just more muted, allowing further obscurity to its moral and societal dilemmas.

Red, White and Blue contrasts from McQueen’s criticism of the police, as in the case of Logan’s story, it never resulted in a win. More a life-long mission, there is no definitive answer to McQueen’s tale. The ambiguity of its fantastically bold ending allows for long-lasting spectator thought. Nothing is fed or forced, the storytellers allow for interpretations of Logan’s ultimatum. Really, at its core, the film trudges through Logan’s stages of realization. Starting off as optimistic and hopeful, then coming to terms with the reality that racism in the police is accepted and little does it get acknowledged, but even less does it get punished.

Co-writer Courttia Newland and McQueen have brought together a rather nuanced and impactful narrative of mass thought. They command with a consistently captivating voice. While very serious in its themes, the film doesn’t shy away from bringing a little joy here and there, with Boyega’s Logan fabulously dancing or bonding over the luscious sound of Marvin Gaye’s music. There is a true humanity to McQueen’s depiction of him, Logan and his story ultimately feel as real as ever.

Red, White and Blue made its premiere at the 2020 NYFF!