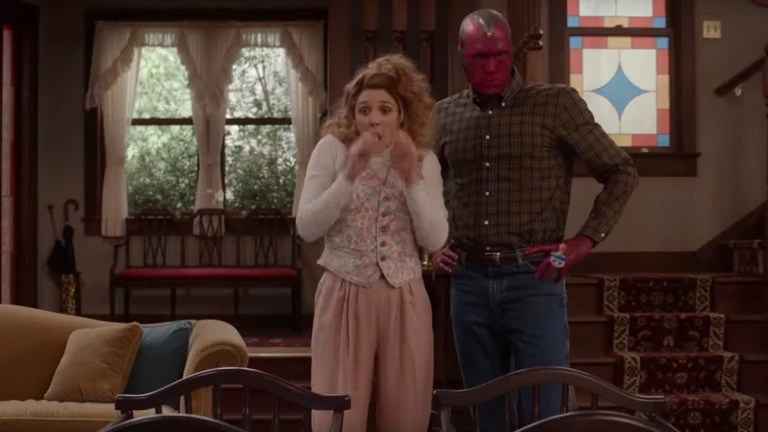 Since its premiere, WandaVision has left us fans with more questions than answers. This week’s episode resolves some of those first questions but opens the door for even bigger ones. The show continues to prove itself as one of the most well-crafted and innovative stories we have seen from Marvel Studios thus far. Episode 5 of WandaVision raises the already high bar by diving further into the mysteries of Westview, giving us new clues and some of the most emotional moments felt between Wanda Maximoff and Vision.

After last week’s entry being focused on S.W.O.R.D. and returning characters Jimmy Woo and Darcy Lewis, episode 5 brings us back to the sitcom-style we are used to, opening with Wanda and Vision struggling to be parents and putting their kids to sleep. The opening scene and title sequence that follows are very reminiscent of the 80s sitcom Family Ties. This isn’t all wacky sitcom adventures though, as we are frequently cutting between Wanda’s pretend reality and S.W.O.R.D. in the real world trying to figure out a way back into the appropriately named ‘Hex’ by Darcy Lewis. The cutting back and forth from Hex to reality is something that could have felt unnatural and taken us out of the story, but thankfully the editing and tight script make it feel seamless.

One of the biggest highlights of the show so far has been the incredible acting from Paul Bettany and Elizabeth Olsen. Both actors have been able to stretch their comedic abilities in past episodes, Bettany especially, who shows off just how funny and ridiculous a vibranium synthezoid living in suburban America really is. But here Vision starts to really question Wanda and everything around him. This eventually gives us a truly horrific scene with Vision’s coworker Norm. Wanda on the other hand, spends the episode trying to teach her newborn 10-year-olds how to take care of a dog. This is a pretty common plot for a sitcom, but when contrasted with Vision and S.W.O.R.D. trying to uncover what’s going on in Westview, it becomes all the more heartbreaking as you can see Wanda is trying her hardest to keep her fake world together and live her “normal” life. These stories all culminate in some of the best scenes showcased from WandaVision as a whole, Wanda breaking out of the Hex and threatening our heroes in reality and her confrontation with Vision at the end. It’s incredibly exciting to see these talented actors go all-in on their characters, with more time to flesh them out than the films have granted.

The acting, directing, writing, music, and production design for WandaVision are all next level, but one of the strongest features is its worldbuilding. Obviously, we know this series ties directly into the MCU and that it’s set after the events of Avengers: Endgame. Characters such as Monica Rambeau, Darcy Lewis, and Jimmy Woo are all plucked from different films in the universe, but their chemistry between each other is immaculate – written in a way that feels like these people have been working together for years. It’s so much fun seeing them interact and makes what could have been a boring, exposition-filled, part of the show a blast to watch.

There are some pretty big reveals here. Let us start with one that is known by most fans: we get confirmation that Wanda and Carol Danvers are the two strongest Avengers. This has already been said by the man himself, Marvel president Kevin Feige, in interviews a few years ago, but it’s nice to get an in-universe confirmation. We also learn that Wanda’s twins can age themselves upon command. This ability is probably just a result of the Hex, but the script actually utilizes it for the greater plot, developing the characters of Billy and Tommy, who are adorable additions to the show.

In a shocking turn, we discover that Wanda broke into a S.W.O.R.D. facility and stole the Vision’s dismantled corpse, finally giving us an answer on what happened to Vision after Infinity War, and how Wanda was able to obtain and further manipulate his body. Lastly, the big twist at the end of episode 5 comes during Vision’s clash with Wanda. Their doorbell rings and none other than Evan Peters as a “new” version of Pietro Maximoff is at the door. We don’t know if he’s the Fox Universe Pietro, first introduced in X-Men: Days of Future Past, or if he’s a recast version of the one seen in Age Of Ultron. What is for sure: this move is massive and planting the seeds of the multiverse in the MCU. This could very well be the first thread that leads into Doctor Strange in the Multiverse of Madness. Either that or it’s designed to completely throw us off – something Marvel has done plenty of times in the past.

Reveals and all, this is a fantastic episode of WandaVision, filled again with wonderful references to classic sitcoms. The character work is next level, giving us new dives into this beloved duo that we have never gotten from the films. The revelations answer some of our questions but leave us with so many more in their place. Only being halfway through the series, it’s already proven how crazy and far it’s willing to reach, and we have so much more to look forward to. This is quickly becoming a huge bright spot in the MCU, all the while making Marvel’s dedication to their Disney+ projects loud and clear.