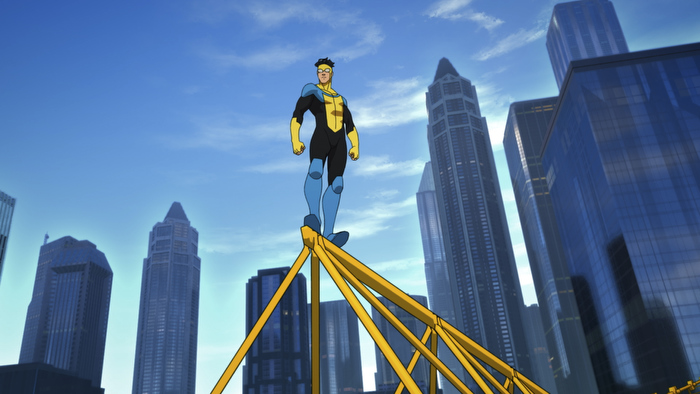 When examining a comic-book property such as Invincible, there are several key elements which indicate how good the adaption could end up being. One of these is casting. With mega ensembles of endless huge names, Marvel projects such as Eternals or Black Widow are almost set up for success regardless of the quality of the underlying project. Secondly, you can look at the source material, with shows such as The Boys and Umbrella Academy finding such success due to their inherently unique and clever concepts. On that note, Invincible features arguably one of the greatest casts of any TV series, and is based on one of the most successful and fantastically written comic-books ever produced. Therefore, it must be said, it’s no surprise to find out that Invincible is utterly and completely incredible.

Based on Robert Kirkman’s 144 issue masterpiece that ran from 2003 to 2018, Invincible‘s first 3 episodes are equal parts faithful adaptation and fun departure from the comics. While staying true to the general story beats and arc of the characters, there are several huge changes from the page which serve to tell a more well-rounded narrative that truly fits the medium.

As previously mentioned, the cast is absolutely stacked. Newly Oscar-nominated Steven Yeun stars as Mark Grayson opposite Oscar-winner J.K. Simmons as his father, Omni-Man. This is complemented by a supporting cast of Sandra Oh, Gillian Jacobs, Zazie Beetz, Jason Mantzoukas, Zachary Quinto, Mahershala Ali, Seth Rogen, Jon Hamm, and Lauren Cohen – as well as pop culture legends Mark Hamill and Michael Dorn. Every single member of the cast, which goes even deeper than this absolutely ridiculous list of names, is so immensely talented that every moment is charged with such humor and dramatic weight that completely elevates the show’s already fantastic source material.

While it’s difficult to pick standouts, the family dynamic between Steven Yeun’s Mark and his parents (Sandra Oh as his mother joining J.K. Simmons) sits at the core of the show. The trio were able to record together for a lot of their scenes and it really comes across in the chemistry and interplay between them. Invincible is dark at times and features brutal violence that is not held back on whatsoever. Though that should not be mistaken for immaturity or a lack of appropriate tone. Every brutal death is treated as an absolute shock, and plays a vital narrative role in establishing this series as a brilliant family dramedy that just happens to also feature superheroes.

Anyone who has read Kirkman’s work knows that Invincible undoubtedly features one of the greatest twists in comic-books, and this really sets up a non-stop pace of revelation after revelation which all work perfectly to advance the plot. Very little time is wasted and you will absolutely tear through the first three 45 minute episodes. With a week-to-week planned release schedule om Prime Video, this show is set to capture the zeitgeist and dominate conversations each week with even fans of the comics unlikely to know what’s happening next.

One particular set of changes from the comics is how much lead character designer Cory Walker, one of the original Invincible co-creators, and writer Robert Kirkman worked together to cater characters to the actors playing them. Mark and his mother Debbie being Asian is a detail that at least so far doesn’t massively alter the plot, but fitting this character to the voice actor is a nice touch matched in both these roles and several others. Further, players such as Zazie Beetz’s Amber are a complete departure from the comics in the most genius way.

In the comic, Amber is little more than a placeholder girlfriend for Mark who brings about complications in his life by not being super-powered. Although in the show, Amber is a strong character with very clearly defined traits and beliefs, who is given a great deal of agency separate to Mark. She isn’t just a love interest or an extension of the lead, she is a fantastically well-rounded individual who is arguably the stand-out of the supporting cast. Little changes like this prove that Invincible is not a boring 1-to-1 adaptation, as easy as that would have been.

Invincible is an all-round outstanding adaptation based on the opening salvo of episodes. The pacing flows unbelievably well, the characters are engaging, interesting, and layered from the very beginning. It has humor, dramatic weight, and a cast that absolutely kills every single line. The moments adapted from the comics are given beautiful respect, but it isn’t afraid to change things, and some of the additional scenes that differ are absolute favorites. It captures the exhilarating highs of flight and being a superhero and perfectly demonstrates the horror of seeing people die in front of you, and it does all of this in an incredibly kinetic way incapable of achieving in the medium of comics.

Often DiscussingFilm are accused of leaning on the high side with our reviews, with a large part of that being that each person is commonly assigned based on whoever is the most passionate about that specific project. For Invincible, however, it’s more than that. I am not giving this the rating I am and the review I am because I’m a long time fan of Kirkman’s work. I am giving Invincible it this score because it looks to be one of the best programs on TV, and because all I can think about having watched 3 episodes is when I next get to watch the next of this fantastic adaptation.