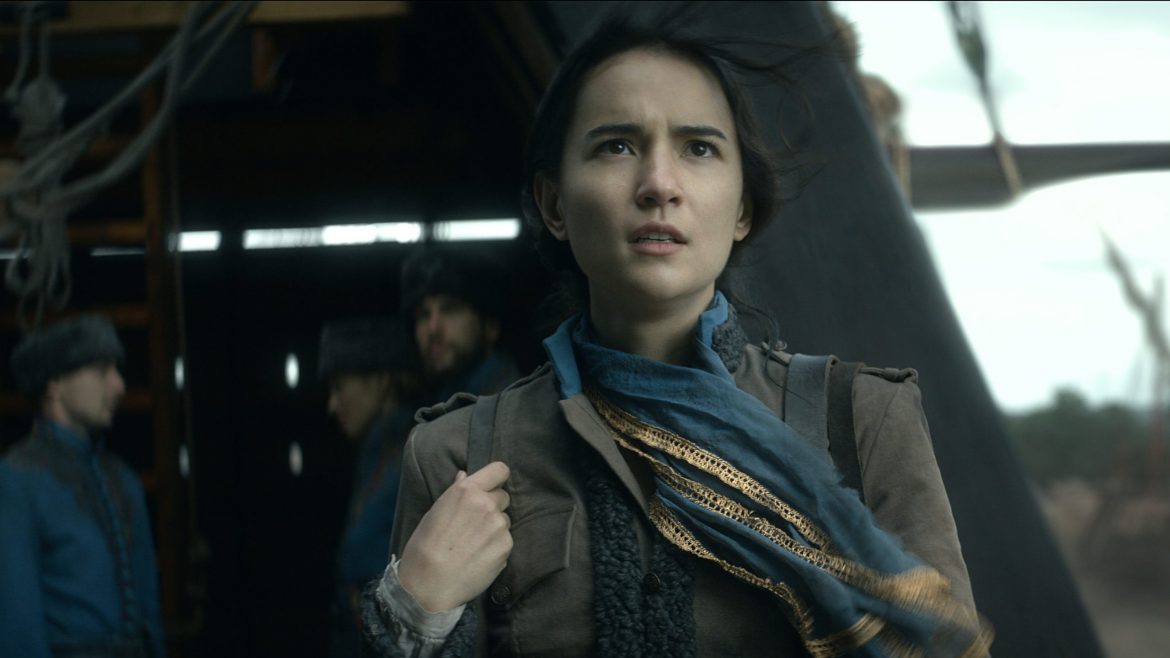 Shadow and Bone is a very popular young adult fantasy series from author Leigh Bardugo. The world created in that novel has been coined the “Grishaverse” as its defining characteristic is that there are those with fantastic abilities (like magic, but not quite) called Grisha. Another duology from Bardugo, Six of Crows, also takes place in the Grishaverse and has been met with similar if not greater adoration from fans. Although the two series are very different, the former being more of a traditional hero’s journey fantasy epic and the latter being a morally gray found family heist mission, Netflix decided to fold the two together in their adaptation of Shadow and Bone developed by Eric Heisserer. It doesn’t only contain the plot of the original Shadow and Bone novel, but also includes beloved characters from Six of Crows.

We follow our young heroine, Alina. She is a soldier of Ravka, a nation ravaged by war with its neighboring countries. While she was orphaned as a child and grew up in Ravka, she is ethnically half Shu, which Ravkans know as their enemy. This alienated her growing up, and her truest friend was another biracial orphan named Mal. Together, they are in the First Army, the branch of the Ravkan military made up of non-Grisha.

Ravka is split apart by a huge ominous dark force called the Fold, inhabited by monstrous creatures called Volcra that attack anyone who enter. Shadow and Bone begins when Alina must cross the Fold and in doing so, it’s discovered that she is a Grisha. Not any Grisha, but a sun summoner who is theorized to be the only person who can destroy the Fold and, ultimately, unite Ravka and help end the war. She is escorted to the Little Palace to learn how to harness her abilities and allies with the powerful and elusive commander of the Grisha Army, known as General Kirigan.

Six of Crows is incorporated into this world through the inclusion of five of its characters; Kaz, Inej, Jesper, Nina, and Matthias. Kaz, Inej, and Jesper are all Dregs which operate out of a gambling house called the Crow Club in Ketterdam, a city in Kerch that is on the opposite side of the fold from Ravka. They have a specialized discreet skillset and are hired for various robberies and such. Nina is a Grisha living in Ketterdam, and Matthias is a part of a force that hunts Grisha, leading to an unfortunate circumstance in which they’re trapped together and have to overcome their differences to survive.

It’s difficult to separate any adaptation from its source material, and moreso with Shadow and Bone because the show is very close to the novels and its differentiations are very obvious. Full transparency, I’m a lifelong reader and have been a fan of fantasy novels long before I was a proper fan of film – making this intersection of the two infinitely fascinating. There are some things film can accomplish that novels cannot. A good adaptation finds the most meaningful way to translate the soul of the page authentically, retaining complex storytelling onto a simplified medium constrained by runtime and the third person perspective. An adaptation is not better or worse if it isn’t close to the material, but if an adaptation beautifully translates the best parts of the source, then it certainly bolsters the quality of the series. In that respect, Shadow and Bone soars in most categories.

The casting is perfect, along with each respective performance. Jessie Mei Li as Alina and Amita Suman as Inej especially shine. Li expertly encompasses the unsure but resilient Alina. Suman wields Inej with a multifaceted intensity, impressively balancing her painful past and aching hope for the future. Ben Barnes has more opportunities to bring depth to General Kirigan and he does so with a thoughtful and careful diligence that justly expands on what the character is meant to represent. Kit Young also takes a few previously missing liberties with his character and plays up Jesper’s personality in a captivatingly chaotic and endearing fashion. Finally, Freddy Carter embodies the hardened ringleader Kaz with the precise silent ferocity demanded from the role, but with enough venerability to let the us see the cracks in his façade.

Even supporting parts that do not get much screen time like Danielle Galligan’s Nina, Daisy Head’s Genya, Sujaya Dasgupta’s Zoya, Calahan Skogman’s Matthias, and Zoë Wanamaker’s Baghra all nail their characters. Some may hail Archie Renaux as his character’s, Mal’s, saving grace. To that, I will respond that Mal has always been likeable and a fiercely loyal companion to Alina, but the limited and unreliable first person perspective of the book can trick the reader into misinterpreting his true nature. In fact, the show’s variety is a very welcome change. It allows many roles and experiences to be explored in ways they could not be in the book as the events of Shadow and Bone were retold through Alina’s perspective.

Another thing that the show utterly nails is the setting. Unlike many other fantasy worlds, Ravka is modeled not after western Europe, but rather Tsarist Russia. Ketterdam is modeled after a number of port cities, but maintains a highly stylized flare. The flavor of these locations are particular, rich, and translate exactly as they are found in the book. The Fold comes to life on screen, ruthless in its seemingly endless infinity. The Volcra are plucked straight out of our nightmares. Additionally, the Little Palace feels like it could have been an actual palace constructed with the novel in mind. Speaking of, the costuming is very deliberate, as it is in the books, with different colored keftas reflecting the type of Grisha. Special care is dedicated to bringing these beautiful keftas to life, also reflected in the extravagant costuming for the rich to be offset with the drab uniforms of the army.

As for the actual content of the show, everyone works off each other very well. Alina and General Kirigan especially are known for being an dichotomy of not only power, but ideals. The relationship between the two is particular in how it explores larger ideas of light, dark, and corruption. The relationship between Alina and Mal is that between the powerful and the powerless exploring who someone is beyond what they’re able to do. Nina and Matthias are opposites but through their exchange, understanding and change is found. Kaz and Inej also find themselves at odds and needing to compromise their morals. All of these ideas are delicate and rightfully carry a fine balance between them. The performances lead the charge with refining these bonds and the script is were this push and pull is tested very solid.

When considering the writing as a whole, Shadow and Bone works best once we have settled into the premise. Once invested, the plot pays off in satisfying ways and balances the struggles of its many characters. Many are concerned with the amount of screen time dedicated to each plotline, but it’s distributed and paced well, which is an impressive feat considering all the threads it must balance. The banter between the characters is wonderful and is the gold standard for characterization in this series. Although, the set up does drags a bit. Introductions are a little rocky. There is quite a bit of worldbuilding and motivations to establish, and the delivery is quite clunky – trying to condense as much information as possible in a few lines of awkwardly placed dialogue. This also contributes to the questionable execution of the largest major change from the book, racism.

Alina is not half-Shu in the original novel. The casting was not color blind, it was color conscious, as the team behind Shadow and Bone wanted to incorporate more diversity into the show and also introduce race as a factor for character motivations by casting an Asian actress. Theoretically, this is not a bad idea. There is a lot of discussion about how characters who are ostracized and othered by society would have a more meaningful impact if they were actually members of a marginalized community. Alina is the best example of a character who would benefit from that added diversity. The writing surrounding the decision leaves much to be desired, though.

The racism Alina endures throughout the series is heavy handed and frequent. Whenever she interacts with those outside her inner circle, you can expect some form of remark about her race or racist insult. For example, “rice-eater” is hurled towards her like a slur. Racism is not always that apparent and while it colors every interaction, it does not present itself the same way every time. There are levels to experiencing racism and it would have perhaps been more meaningful to explore those varied experiences. There was intentionally a mixed race writing room to accurately reflect these topics, so you expect a bigger payoff to how racism effects and shapes Alina’s experience. She must learn to accept Ravka as her country when it does not accept her as its citizen, but that facet to her journey is not explored anymore than it is in the book, where race is not a factor, which is disappointing.

However, most of the diversity retained from the other books works, such as Kaz’s disability and Jesper’s bisexuality. Jesper is the only one with a sexual scene not found in the novel, which brings up concerns of the “sl*tty bisexual” trope. His sexuality is established long before the scene, making it not necessary for trying to introduce the character’s sexuality once more. The decision was probably made because he is the only lead without a love interest. Nevertheless, it’s something for the writers to be conscious of in order to prevent falling into potentially harmful tropes.

Shadow and Bone is every bit the kind of fantasy series we’ve been anxiously expecting. It is clear the team behind the series dutifully cares for not only the fantastic world Bardugo created, but complex characters that resonate with so many and the story representing something bigger than any of them. It’s as beautifully immersive as it is clever. Engaging and thoughtful, it’s definitely worth your time. More than anything, both Shadow and Bone and Six of Crows is about fighting despite everything terrible for the hope something better and that theme is woven artfully through the show.