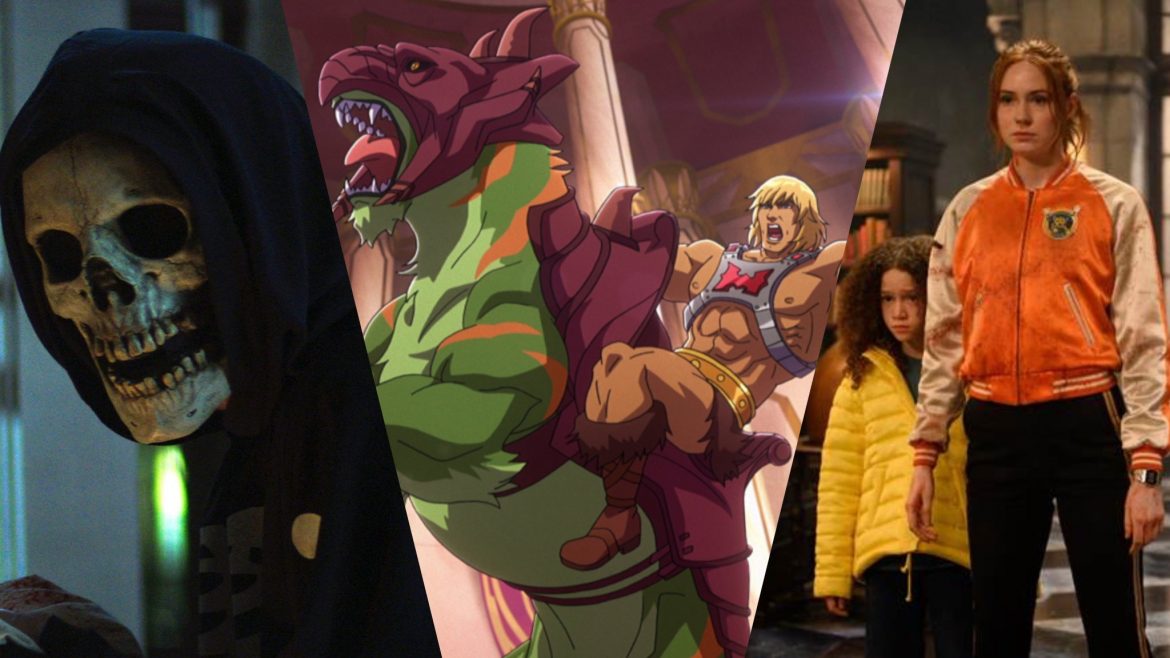 We’re finally in the midst of summer and the heat isn’t playing around this year, and neither is Netflix. As we reach those days where it’ll be too hot to go outside, thankfully, Netflix will have a plethora of great original content spread throughout July. From R.L. Stine’s Fear Street Trilogy to the highly-anticipated, female action adventure Gunpowder Milkshake, there’s no shortage of prime level entertainment this month. Throw in Kevin Smith’s Masters of the Universe: Revelation and Season 2 of I Think You Should Leave with Tim Robinson and Netflix truly does have something for everyone in July.

Outside of these new originals comes plenty of great classics also joining the service. While everyone patiently waits for the next season of Cobra Kai, Netflix will be kindly adding the original Karate Kid trilogy to keep your memory refreshed with a re-watch. If those don’t scratch your martial arts itch then the Kung Fu Panda films will. More film series in their entirety such as the Austin Powers trilogy and all of the Twilight Saga will be the talk of the town as they are too coming in July.

Moviegoers will then can get the chance to catch up on some pop culture favorites like Paul Thomas Anderson’s Boogie Nights and Quentin Tarantino’s Western revenge tale, Django Unchained. Get more recs and the whole list of everything to and leaving from Netflix in July. You can also find what’s new and leaving from HBO Max, Hulu, and Disney+ right here on DiscussingFilm

In order to protect an 8 year-old girl from an evil crime syndicate and its army of henchmen, a dangerous assassin must team up with her estranged mother and her lethal associates. Directed by Navot Papushado and starring Karen Gillan, Lena Heady, Carla Gugino, Angela Bassett, Michelle Yeoh, Chloe Coleman, and Paul Giamatti, Gunpowder Milkshake is one of the most hyped original films of the month with its star-studded, female-lead cast. Could this find similar action-packed success of Netflix’s The Old Guard and be the start of a new series?

Based off the popular children’s books by R.L. Stine, Fear Street is a film trilogy event following three generations of Shadyside stories as they weave together a darker tale, causing ripples throughout the century. All 3 Fear Street films release throughout July, marking the first time where Netlfix has made such an event out of an entire set of connected films. And they are designed that way, for you cannot get the complete Fear Street experience by missing out on any of the chapters.

Masters of The Universe: Revelation

The war for Eternia begins again in what might be He-man and Skeletors’ final battle. Coming from none other than Kevin Smith, this updated take on the classic He-man series features a jam-packed voice cast including Chris Wood, Kevin Conroy, Mark Hamill, Sarah Michelle Gellar, Liam Cunningham, Lena Headey, and more. Animations fans will certainly want to tune in, as this could finally breathe fresh life into the Masters of the Universe franchise.

I Think You Should Leave with Tim Robinson: Season 2

Two years since it got renewed for a second season, fans will have to wait no longer as the second season of the popular sketch-comedy show I Think You Should Leave finally arrives. Comedian Tim Robinson leads audiences as he and his cast of misfits create segments with a shared goal: do whatever it takes to get people to leave. A breakout hit during its first season, this next installment should be more than enough to satisfy.

You Are My Spring

I Think You Should Leave With Tim Robinson: Season 2

Never Have I Ever: Season Two
A Perfect Fit
Beastars: Season 2
Emicida: AmarElo – Live in Sao Paulo
My Amanda

Chernoybl 1986
The Movies That Made Us: Season 2
One on One with Kirk Cameron: Season 1
Sexy Beasts
Too Hot to Handle: Brazil
Trollhunters: Rise of the Titans

Still Working 9 to 5
Words Bubble Up Like Soda Pop

The list of titles leaving Netflix may not be as long as it’s been before, but it still features some fan-favored hits that subscribers will have to say goodbye to… for now. The Child’s Play series, Nacho Libre, and Zombieland are only a few names that will definitely be missed. See everything leaving from Netflix this July below.

The Princess and the Frog

Check out what’s also coming to the following streaming services throughout July 2021: