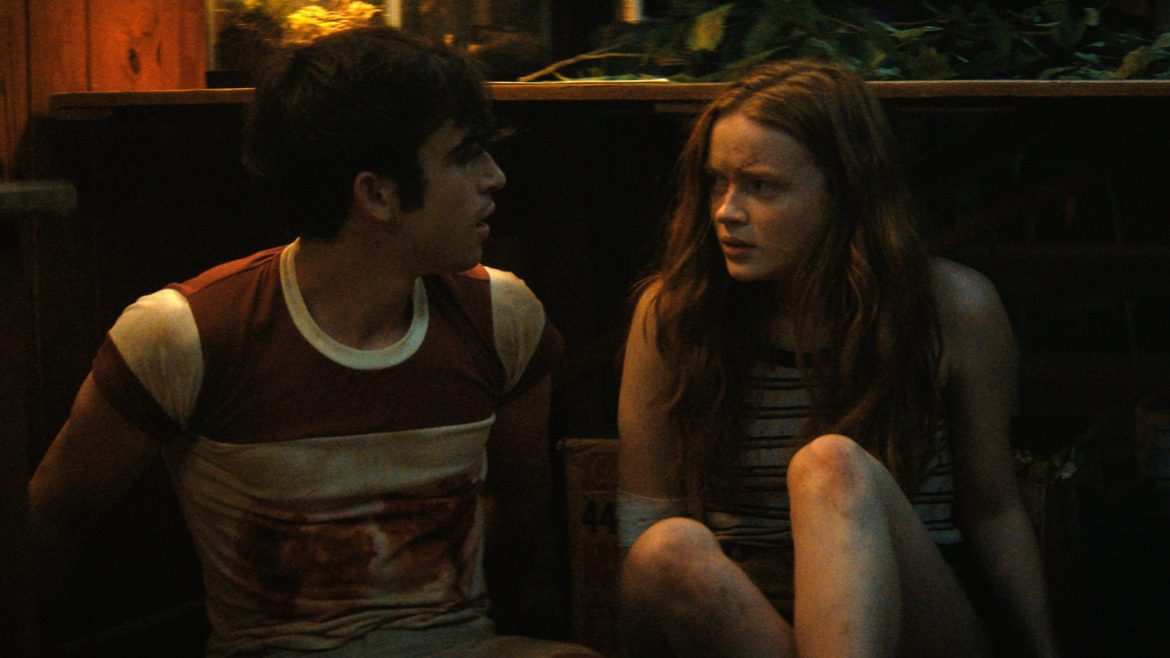 The second installment of Netflix’s Fear Street trilogy is yet another solid slasher that gets far grislier and feels a bit more urgent than its predecessor. Taking direct inspiration from films like Friday the 13th, this middle chapter kicks off with the survivors of the first film arriving at the home of the mysterious C. Berman (Gillian Jacobs), herself the survivor of a similar massacre. Berman recounts her painful tale of the night she was pulled into the cyclone of Shadyside’s violent curse, and with that, we’re sent back in time a couple of decades to the pine-scented heat of Camp Nightwing.

The summer camp is harshly divided between the residents of Shadyside and the neighboring Sunnyvale, with the wealthier and boisterous Sunnyvalers domineering the downtrodden Shadysiders. The younger C. Berman (Stranger Things’ Sadie Sink) in particular, who goes by Ziggy, is constantly bullied by her fellow campers who mockingly call her a witch due to her incongruous attitude and tendency to steal from others. Ziggy wasn’t always like this, but recent trouble at home has caused her to start acting out more and more, which sparks tension between her and her older sister, Cindy (Emily Rudd).

Cindy has made some changes to herself as well in the wake of the sisters’ family issues. She’s gone from a rebellious young teen to a total swing in the opposite direction, turning into a goody-two-shoes who dresses preppy and refuses to curse. She hopes that this will help her finally get out of Shadyside and into the good graces of the Sunnyvale crew, and while this has gotten her a nice boyfriend (McCabe Slye), it’s also earned the ire of her friends like fellow counselor Alice (Ryan Simpkins). But when an incident at the campgrounds sets off a chain of events that unleashes the curse of the Shadyside Witch, they’ll have to work together to unravel the mystery surrounding it before an ax-wielding killer slaughters the entire camp.

1978 is, for the most part, far more brutal than the first film (it’s hard to top that one shocking death in 1994 – you know the one), and once again showcases director Leigh Janiak’s flair for vibrant Horror sequences that are both vicious and impossible to look away from. This was supposedly the last of the trilogy to be filmed despite being the middle chapter, and it shows that Janiak definitely had the act of killing down to a science by that point – the murders, and there are plenty, are swift, savage, and surprising in the ways that stuff like this can still shock. Of course, it also feels like things maybe go a bit too far when small children start getting added to the body count, though this does at least help bolster the way the film frames Shadyside’s curse as the tragedy that it is.

As a standalone slasher movie, 1978 is solid and memorable in its own right. Take out the prologue and epilogue that tie into the larger trilogy and you have a particularly strong Horror flick that can stand on its own. The characters feel a little more fleshed out than in the first film and thus the emotional moments hit harder, particularly between Ziggy and Cindy, who solidify the fact that Fear Street’s biggest strength may just be its performances.

The film still struggles with the way it sometimes spells things out for us, either with its central mystery or its connections to 1994. We’re reminded no less than three times that Nick Goode (Ted Sutherland), who Ziggy starts a romance with, will become the future sheriff of Shadyside, and the tedious way that the characters figure out a curse that we’re already familiar with threatens to affect the pacing. It also suffers from the same couple of gaps in logic that the first film had; someone who was repeatedly stabbed appears to be brought back to life just by CPR, and seriously, where the hell are all of the adults in this town?

1978 is still one of the better and impactful Horror movies of the year, and Janiak has more than proven to be one of the standout filmmakers of the current slasher renaissance. But with only one film remaining in her Fear Street trilogy, it still feels like the most interesting aspect of the story isn’t being fully explored: the relationship between Shadyside and Sunnyvale. The two become a bit more intertwined – Sunnyvalers secretly sleep with Shadysiders, Ziggy valiantly goes to rescue one of her Sunnyvale tormentors – although things still feel vague and one-sided; Sunnyvalers are still shown to pretty much just be irredeemable jerks. If the final chapter, 1666, is able to delve into the why of this, then the bigger whole of this trilogy will feel stronger and maybe have something to say.

Our review of Fear Street 1994 – A Competent, but Unremarkable Start